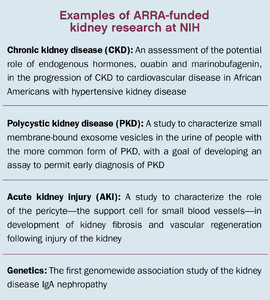 NIDDK Kidney Research: Current State of Funding and Its Impact on Science

Second in a three-part series looking at NIDDK funding

The year 2007 was a challenging one for researchers. The National Institutes of Health (NIH) funded only 24 percent of proposals (down from 32 percent in 1999) (1), and additional funding for research seemed miles away. Clinical practice, private industry, and foreign countries all threatened to poach valuable talent from the ranks of researchers at U.S. research institutions. After a funding boom earlier in the decade, willingness to devote new dollars for NIH had dried up in Congress. The economy, increased spending for other sectors, and a lack of political urgency drove the trend.

Tight funding at NIH contributed to a host of challenges at the National Institute of Diabetes and Digestive and Kidney Diseases (NIDDK). Fewer and fewer proposals were granted funding, review boards began to tend toward more conservative proposals, and second and third applications for the same research proposal became commonplace. According to ASN Councilor Sharon Moe, MD, FASN, who also serves on the ASN research task force, “In the past few years, NIH has had to do the best they can within the bounds of their budget. Unfortunately, a lack of new investment in research today can have an amplified impact on medicine in the future.”

One major concern with these funding constraints is that the pitfalls of an arid funding landscape fall disproportionately on young researchers, who are just entering the pool of NIH grant applicants. In 1990, the average age for a researcher’s first prestigious R01 grant was 39; in 2007 the age was 43 (1). The inherent risk is that young researchers become frustrated and disillusioned with the application process, encounter difficulty securing continued funding for their research, and decide to pursue alternate career paths.

A 2008 report by some of the country’s leading scientists and research institutions sums up the quandary for early career researchers: “They can’t get the NIH R01 funding they need to establish a lab and launch an independent career because NIH reviewers say they don’t have the data to support their grant applications. Yet the preliminary data and proof that experiments will succeed is hard to come by without that very funding.” (1)

Competition from foreign countries for talent is also becoming a more serious threat as countries such as China dedicate greater resources toward medical research. In 2009, the United States committed 2.7 percent of gross domestic product (GDP) to medical research; China committed 1.5 percent of its GDP (2). This investment is making for some high profile coups as several established scientists have elected to return to their country of origin, and more than a few young investigators have returned home after attending medical school in the United States.

The United States, however, remains the king of research opportunity and a destination for medical students across the world. According to Dorry Segev, MD, director of clinical research for transplant surgery at Johns Hopkins University and associate professor of surgery and epidemiology at Johns Hopkins University, training programs, availability of data, and the country’s reservoir of scientific knowledge and talent are all contributing factors.

“The more we continue to support these types of activities through NIH, through ASN, through other organizations, we will be able to stay at the top of that game,” Segev said. “We certainly are at risk of losing our status at the top if we give up some of these endeavors.”

So what about the present day? In 2009, Congress passed the American Recovery and Reinvestment Act (ARRA), which included $445 million for NIDDK alone. Over 97 percent of these funds were allocated to extramural research initiatives, with the remainder funding intramural research programs and administrative costs (Figure 1).

The funding granted a much needed boost to the priority research at NIDDK. However, the one-time nature of ARRA funding means that most of the dollars were put toward projects that only require one or two years funding rather than risk dollars on more ambitious long-term projects that may lack the dollars to come to fruition down the line. ARRA has been a critical stopgap for NIDDK, but it is only a temporary solution, and one that arguably has reinforced the conservative approach toward applications that has become the new reality at NIH.

With the remainder of recovery act funds being distributed in 2010, NIDDK leadership continues to look toward increasing funding for the future. The need for an investment in medical research is evident to account for a growing and aging population and to counteract the institutional roadblocks that threaten the next generation of researchers. Indeed, the outlook may be brightening. Current Senate proposals call for an 11.9 percent increase in the budget of NIH for 2011, but with the current fiscal mood of the country, that increase remains uncertain. One thing is for certain: the status quo is unsustainable in the long term. Without serious changes, the country may be paying the price for decades to come.

Next month’s final installment of this series will assess the future funding outlook for NIDDK and where the institute hopes to be in the future.