Funding since 1990 for selected NIH institutes 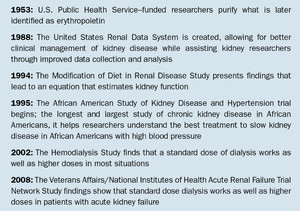 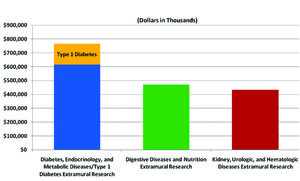 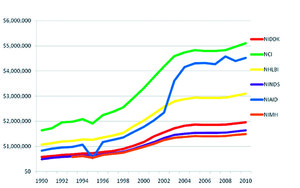 Flat Funding for the NIDDK an Impediment to Kidney Research

Part I: A Historic Retrospective

The National Institute of Arthritis and Metabolic Diseases, predecessor of the National Institute of Diabetes and Digestive and Kidney Diseases (NIDDK), was founded in 1950 under the already established National Institutes of Health (NIH). The end of World War II and the subsequent economic boom shifted dollars and scientific brainpower into medical research as never before. The decade after World War II saw the establishment of no fewer than six divisions of the NIH, including the future NIDDK and the National Heart, Lung, and Blood Institute. The research undertaken by the NIH and its new institutes contributed greatly to public health, raising Americans’ life expectancy from 68 years in 1950 to its current level of 78 years.

The history of kidney disease mortality is crucial for an understanding of the need for NIDDK funding, for two reasons. First, it reveals the tremendous contribution NIDDK-funded research has had in slowing the progression of kidney disease and the mortality of chronic kidney disease (Figure 1). Second, it underscores the importance of NIH funding for today’s research efforts. Sharon Anderson, MD, FASN, president of the American Society of Nephrology, explained: “For kidney disease treatment, we would not have advanced as far as we have without the catalyzing effect of the NIDDK. NIDDK-sponsored research has dramatically improved the lives of people suffering from kidney disease.”

As the disease continues to claim a significant number of lives every year, both human and financial costs continue to expand. Despite the number of lives it claims, however, extramural funding for kidney disease through the NIDDK lags behind the external research dollars spent on other diseases (Figure 2).

The NIH spent $523 million on kidney disease research in 2008 (2). But with a population expanding and aging simultaneously, is this funding enough? The bull market of the 1990s led to a doubling down on medical research with funding for the NIH. In 1998, President Clinton and Congress agreed to double the budget of the NIH over the next five years. The impact of this investment was significant, yet despite the positive effect of the increased budget on renal research (the subject of the next installment of this series), the increase was temporary. In 2006, the NIH’s budget did not keep pace with inflation for the first time in 30 years (3). Furthermore, a gulf has developed between NIDDK funding and the funding for some of the larger NIH institutes over the past 20 years (Figure 3).

When asked about the NIDDK’s recent funding, John Sedor, MD, said: “Although the NIDDK budget has more than doubled in the past 20 years, the increases in appropriated dollars to NIDDK when compared to funding increases for other institutes, while appreciated by the kidney community, have been more modest.” Although the number of people suffering from kidney-related diseases has increased since 1990, the NIDDK’s percentage of the NIH budget has decreased from 8.5 percent in 1990 to 7.8 percent in 2010 (4). The ASN continues to advocate for increased funding for the NIDDK and kidney disease research. The current state of NIDDK funding will be the focus of our next discussion, with a particular emphasis on NIDDK-funded research grants.

Next month’s installment of this series will address “NIDDK Kidney Research in Real Time, the Current State of Funding, and its Impact on Science.”