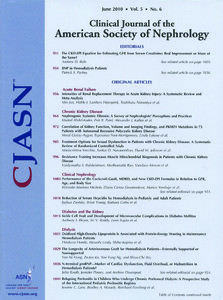 CJASN: The Right Decision at the Right Time?

The Clinical Journal of the American Society of Nephrology (CJASN) published its first issue in July 2006, and it has proven very successful in the relatively short time since its launch. In that time, it has more than doubled its initial impact factor, broadened its subscription base, and attracted a global readership. This success is due in large measure to Editor-in-Chief William C. Bennett and his editorial team, originally consisting of deputy editors Harold I. Feldman, MD, Robert G. Narins, MD, and Mohamed H. Sayegh, MD; Managing Editor Bonnie O’Brien; editorial assistant Margaret Marksthaler; and several associate, international, and liaison editors across the country and around the world.

Dr. Bennett and William Henrich, MD, president of the University of Texas Health Science Center at San Antonio and former member of the ASN Council that discussed the necessity of a clinical journal, give much of the credit to Dr. Narins for assessing member interest and articulating the need for the journal to the Council. Within the ASN Council discussion, debate continued about the need for providing the membership with more clinical research information.

Dr. Henrich recently described the Council’s thinking: “No one wanted to do something to detract from JASN, though many on the Council saw the need for clinical reviews and updates to help ASN be seen as a leader in clinical nephrology and to be perceived as changing with changes in the field.”

Membership surveys and assessments of nephrology clinical journals were conducted “every step of the way” to inform the evolving discussions. Eventually, a majority of the Council agreed that the ASN and its membership would benefit from the establishment of a clinical journal that would complement JASN.

Dr. Bennett originally estimated that CJASN’s impact factor wouldn’t be higher than 3. Based on that estimate, he made a bet with his deputy editors, who said it would be much higher. They were right, and Dr. Bennett paid for it by buying dinner for the editorial team at a high-end restaurant during the 2009 ASN Annual Meeting.

In the initial issue of CJASN (1), Dr. Bennett and his deputy editors addressed the “explosion of information” in nephrology and explained that the new journal was created to serve as “a home for this emerging mass of clinical/translational research.” In an accompanying editorial, Josephine P. Briggs, MD, then director of the Division of Kidney, Urology, and Hematology in the National Institute of Diabetes and Digestive and Kidney Diseases at the National Institutes of Health, and Thomas H. Hostetter, MD, of the Albert Einstein College of Medicine in New York, described the launch of CJASN as a “logical consequence of this growing clinical renal research community (2).”

Indeed, the CJASN editors emphasized that “whenever possible, application to managing renal disease will be stressed” and that the journal would “provide special emphasis on hypertension, transplantation, and internal medicine.” Asked recently if these original objectives have been achieved, Dr. Bennett said, “We’re getting there. At nephrology meetings, there are many citations to CJASN. I just returned from a transplantation meeting at which the only nontransplant journal cited was CJASN.”

Dr. Bennett said that CJASN has very good articles in transplantation, but could do more in the area of hypertension. “This would be a good area to go after in future marketing,” he said. Dr. Henrich agreed that “evolving issues in hypertension would be fruitful for CJASN to pursue” because it ties into clinical nephrology. Although nephrologists complete residency training in internal medicine (unless they are pediatric nephrologists who first train in pediatrics), Dr. Bennett explained that nephrologists focus more on their specialty than primary care medicine. The result is very few internal medicine articles in CJASN.

Initially, CJASN planned to include a list of “ongoing clinical trials available for patient enrollment,” but Dr. Bennett said this idea had become redundant, because information on recruitment for clinical trials is widely available. However, he said, CJASN does “publish methods of important clinical trials before the trial is completed.”

Dr. Feldman also outlined the following tasks and challenges for the future:

When asked to identify the highlight of his tenure as editor-in-chief, Dr. Bennett said,

“Personally, fulfillment of Dr. Narins’ vision of the need for CJASN.”

Also in the first column, Nephron’s and Henle’s statements starting with “You are both correct and ending with “How so?” belong only on page 17. They were inadvertently also placed on page 16.