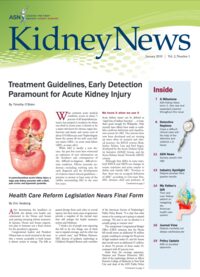 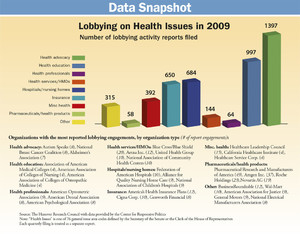 After dominating the headlines in 2008, the debate over health care culminated in the House and Senate each passing sweeping reform measures. In January, House and Senate negotiators plan to hammer out a final version for the president’s signature.

Congressional leaders and President Obama have so much invested in the issue that a version acceptable to both houses is almost certain to emerge. The bills as passed diverge from each other in several aspects, but their many areas of agreement provide a snapshot of the myriad ways they will reshape the health insurance system and Medicare.

“I think a lot of people were expecting this bill to do two things, one of them was to expand coverage, and the other was to control costs,” said William Harmon, MD, director of pediatric nephrology at Children’s Hospital Boston and a member of the American Society of Nephrology’s Public Policy Board. “It is clear that what seems to be coming out is going to expand coverage. The jury is out on whether it is actually going to contain costs.”

The nonpartisan Congressional Budget Office (CBO) estimates that the House bill would insure an additional 36 million people, resulting in coverage for 96 percent of legal residents under 65, and the Senate plan would cover an additional 31 million, or about 94 percent of those under 65, compared with 83 percent now.

Aside from the coverage expansion, Harmon and Thomas Hotstetter, MD, chief of the nephrology division at Albert Einstein College of Medicine in New York City and chair of the ASN Public Policy Board, pointed out two provisions in the bills of particular interest to nephrologists: Medicare payment related to end stage renal disease (ESRD) and increased funding for comparative effectiveness research. The reform momentum is likely to also lead to another key action within the next two months—a reconfiguration of the Medicare reimbursement scheme that avoids scheduled cuts.

A proposal for funding the extension of Medicare coverage for immunosuppressant drugs for transplant patients beyond the current 36-month limit has sparked controversy, and even caused a rift between the dialysis community and the transplant community. Both sides support extending the coverage, but the proposal is perceived by some as coming at the expense of dialysis patients.

The Medicare Improvements for Patients and Providers Act of 2008 (MIPPA) requires that Medicare payment for dialysis services be bundled to include the patient’s drugs as well, and the Centers for Medicare and Medicaid Services (CMS) is in the midst of preparing its final rule on the bundling. Many in the dialysis community have objected to CMS’ proposal to include oral drugs as part of the bundle, but the CBO calculates that this bundling would save Medicare some $100 million over the next 10 years. A provision in the House bill included at the behest of Rep. Pete Stark (D-Calif.) would extend Medicare payment for immunosuppressive drugs for life, noting that the increased cost would be offset by the savings in dialysis payments.

Supporters of this approach say that it creates no actual tie between the dialysis and immunosuppressant payments, but is only a nod to Congress’ pay-as-you-go rules, which require that before increasing spending in any area, one must identify a reduction or new revenue source to offset it. And the bundling is already set in law. Opponents of the approach complain that it appears to pit funding for one group of patients against another, that proposed dialysis payments are already inadequate, and that further cuts could compromise care.

When Sen. Richard Durbin (D-Ill.) proposed a similar amendment for the Senate bill, the move was opposed by Kidney Care Partners, a coalition that includes dialysis centers, several drug manufacturers, and nonprofit organizations including the National Kidney Foundation. The group advocates that private insurance coverage for dialysis be extended to cover one more year before Medicare takes over, using this cost-shift to pay for the immunosuppressive drug extension.

The Durbin amendment was not included in the final Senate bill, but given his prominence as the second-ranking Senate Democrat and the inclusion of the provision in the House bill, the proposal is certain to receive close consideration in the conference committee that reconciles the two bills.

Both bills contain provisions for a greater federal commitment to comparative effectiveness research. The House bill would establish a Center for Comparative Effectiveness Research within the Agency for Healthcare Research and Quality whereas the Senate would create a nonprofit Patient-Centered Outcomes Research Institute.

Nephrology could particularly benefit from comparative effectiveness research, Hotstetter said: “Nephrology is certainly a place where we just don’t know which treatments are best for a lot of conditions. There are big issues in nephrology where comparative effectiveness research could be very useful: what’s the best way to lower phosphate, what’s the best real target range for parathyroid hormone, and what’s the best vitamin D preparation to use.” All of these relate particularly to the end stage renal disease and dialysis treatment reimbursements currently under consideration by CMS.

While more funding for research would be welcome, Hotstetter noted most scientists prefer that such research be performed in the peer-reviewed context of the National Institutes of Health instead of an agency that could be more subject to political pressure.

For the past several years, Medicare physician reimbursements have been scheduled to be reduced annually. Congress has voted at the last minute to postpone the cuts, until their cumulative effect would be a 21 percent reduction if they were allowed to take effect.

The House has already passed a bill that repeals the 21 percent cuts and institutes a new reimbursement formula, and Senate leaders say they plan to pass a companion measure in the first two months of 2010.

The expansion in health insurance coverage would come through a variety of mechanisms. Medicaid would be expanded to cover those whose incomes exceed the federal poverty level by 150 percent (House bill) or 133 percent (Senate bill), resulting in about 15 million additional recipients. Those with incomes up to 400 percent of the federal poverty level would be eligible for subsidies to buy insurance. The House bill would require employers with payrolls over $500,000 to provide employee health insurance. The Senate bill includes no such mandate, but would require large employers to pay fees to the government if their employees qualify for federal subsidies. Small employers would not be required to provide health insurance, but would receive tax credits to buy it for employees.

One of the most contentious issues is a publicly run health insurance option, which is included in the House bill but not in the Senate bill. How that issue will be worked out is anyone’s guess at this point.

Both bills would create a Health Insurance Exchange where companies and individuals could comparison shop among insurers, with the government defining a minimally acceptable benefit package. Insurance companies would no longer be permitted to deny coverage based on pre-existing conditions, but until that measure takes effect in future years, the bills would establish high-risk pools with caps on the premiums that can be charged. (Many of the provisions phase in from 2013 to 2016, to allow consumers and insurers time to adjust.) In response to complaints about insurers canceling coverage when a patient becomes ill, the bills would prohibit insurers from rescinding coverage except in cases of fraud. The bills cap annual out-of-pocket spending and remove limits on lifetime benefits.

Lobbying on Health Issues in 2009

Individuals would be required to obtain qualifying health coverage or pay a penalty, with exceptions allowed for religious objections or financial hardship. The House bill would impose a fee on those who do not obtain coverage of 2.5 percent of their income, with a similar penalty in the Senate bill.

To fund the subsidies and other costs, each bill would impose new taxes, and the bills differ greatly in their approaches. The House would impose a 5.4 percent income surtax on individuals who earn more than $500,000 and couples who earn more than $1 million. The Senate bill would increase the Medicare payroll tax on individuals earning more than $200,000 and couples earning more than $250,000 and impose a tax on high-priced health insurance policies, the so-called Cadillac plans.

The CBO estimates that the net effect of both versions would be to reduce the federal deficit by an average of about $13 billion a year for the next 10 years.

Much of the federal budget cost savings come through squeezing more than $400 billion out of the growth of Medicare and related programs over 10 years. A large portion of the cuts would be to Medicare Advantage plans, bringing their reimbursements in line with regular Medicare payments.

The House bill would direct CMS to negotiate drug prices with pharmaceutical manufacturers for Part D plans. Both bills contain provisions to close or reduce over several years the “doughnut hole,” in which Medicare does not cover drug expenses between $2,700 and $6,154. The House plan would shrink it by $500 a year, and for most people in the doughnut hole, drug manufacturers have agreed to provide brand-name drugs at half price.

Whatever the impact of the many provisions of the legislation, Harmon and Hotstetter look forward to the expansion of health insurance coverage. Hotstetter noted that increased early treatment of the two most common causes of renal failure, hypertension and diabetes, in a primary care environment could prevent the need for many patients to ever see a nephrologist.

“If we really can have 94 percent of the population covered, hopefully that would mean that people with chronic kidney disease could be treated earlier and effectively, and their need for dialysis or transplantation prevented or forestalled. If more people get treatment at early enough stages, that could save money and would be good from a nephrology standpoint, but that’s years down the line to see if that really happens,” he said.