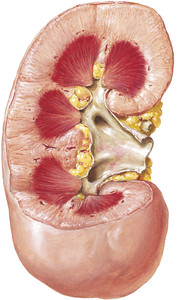 What common acute medical condition occurs in about 5 percent of all hospitalized patients; has jumped in incidence by about one-third in recent years; is known to be a major risk factor for chronic organ dysfunction and death; and carries costs of about $10 billion per year? Nephrologists know the answer all too well: acute kidney injury (AKI)—or acute renal failure (ARF), as some call it.

While AKI is hardly a new disease, the past few years have witnessed an explosion of new information on the incidence and consequences of this difficult-to-diagnose, difficult-to-treat condition. Efforts currently underway—including evolving tests for early diagnosis and the development of evidence-based clinical guidelines—promise to answer at least some of the riddles surrounding AKI in the next few years.

We know it when we see it

Acute kidney injury can be defined as “rapid loss of kidney function”… at least, that’s good enough for Wikipedia. Only recently have efforts been made to establish a uniform definition and classification system for AKI. Two systems have now been developed and are turning up more often in research and clinical practice: the RIFLE criteria (Risk, Injury, Failure, Loss and End Stage), developed by the Acute Dialysis Quality Initiative (ADQI) Group, and the Acute Kidney Injury Network (AKIN) criteria.

Although they differ in some ways, both RIFLE and AKIN use changes in serum creatinine and urine output to define and classify AKI. “Previous to that, there was no accepted definition of ARF,” according to Chi-yuan Hsu, MD, division chief and professor of nephrology at the University of California, San Francisco. “It was kind of ‘I know it when I see it,’ even though we all talked about it a lot.”

The central problem with AKI is that diagnosis is generally delayed until changes in serum creatinine occur—which can be hours to days after the decline in kidney function. To close this gap, a flurry of studies in recent years have evaluated potential new biomarkers—with leading candidates including neutrophil gelatinase-associated lipocalin (NGAL), kidney injury molecule-1 (KIM-1), and interleukin-18 (IL-18).

“So we have quite a number of markers that make a lot of sense, but it’s not entirely clear how to use them clinically—yet,” said Hsu. Nevertheless, some markers are proceeding to commercial development, with registered patents and even commercially available dipstick tests.

Such applications are “running ahead quite a bit,” in Hsu’s view. “I think the general consensus is that we still don’t know exactly how to use these things. But in the next five years, I would say that they would, in some fashion, come into clinical practice.”

Even if AKI can be detected early, that information is useful only to the extent that available treatments can improve patient outcomes.

“We really don’t have great methods of reversing AKI, particularly when it’s tubular injury,” said Richard Lafayette, MD, clinical chief, nephrology, and associate professor of medicine at Stanford University Medical Center. “We don’t know what the best support plan is for patients with acute renal failure, including when and how to start them on dialysis.”

Questions also remain as to the best method of dialytic support (i.e., continuous renal replacement therapy versus standard dialysis), timing of initiation, and intensity of treatment.

Evaluation of new approaches to prevention and treatment will require accurate approaches to measuring efficacy. A study in the November 2009 Clinical Journal of the American Society of Nephrology showed that the results of AKI treatment trials are affected by the outcome measures used (Clin J Am Soc Nephrol 2009; 4:1705–1715). Led by John Pickering, PhD, of the University of Otago, Christchurch, New Zealand, the researchers found that continuous measures of creatinine change provided the best estimates of treatment efficacy. By comparison, categorical metrics tended to underestimate the effect of treatment when efficacy was low, and overestimate it when efficacy was high.

The study suggested that using an estimated baseline creatinine tends to overestimate AKI prevalence, compared to a measured baseline. “Clinical trials of AKI should utilize a continuous outcome metric, a measured baseline, and report baseline median and interquartile range,” Pickering and colleagues concluded. They also proposed some new, continuous outcome metrics incorporating information on the extent, rate, and duration of change in creatinine.

Establishing the incidence of AKI poses special challenges. “Most previous studies of the epidemiology of AKI looked at how many cases per hospitalization,” said Hsu. “The problem is that hospitalization is not an unchanging thing—people get hospitalized at different rates across the country, and with managed care it’s been harder and harder to get into the hospital.”

Only recently have studies focused on quantifying the incidence of AKI on the population level. “That’s an important advance, and it’s clearly shown that the incidence of AKI is going up over time,” Hsu said. “The incidence of dialysis-requiring AKI, for example, has gone from 19.5 to 29.5 per 100,000 person-years over about an eight-year period—1996 to 2003. That’s a 33 percent increase.”

While the focus has been on CKD and ESRD in recent years, AKI is the real “epidemic” of kidney disease, Hsu said. “It’s actually going up faster than the incidence of ESRD and CKD—not a widely known fact.”

So AKI is a hospital-acquired disease? “It is. Most people who have AKI got it in the hospital,” said Hsu. He sees the kidney as an innocent bystander in many of today’s high-tech, lifesaving interventions. “A lot of the modern-day AKI is created by doctors, usually in pursuit of something good, of course! But it’s an iatrogenic side effect.”

Meanwhile, there’s a growing appreciation of the adverse consequences of AKI in the long term—after the patient goes home from the hospital. “Almost all the previous studies of AKI have been limited to hospital stay,” said Hsu. “They generally haven’t asked what happens to patients when they leave the hospital, because studies are just not set up to do that.”

Studying the post-hospital course of patients with AKI poses numerous difficulties. In the past, when a patient with AKI came off dialysis—as most do—they were considered to have recovered. “Ten years ago, most of the nephrologist’s attention was on ESRD,” said Hsu. “So if a patient had some decrease in renal function, but didn’t have ESRD, people didn’t pay that much attention to it.”

When later problems developed—including CKD—the history of acute renal failure often wasn’t considered as a contributing factor. “When we see someone with CKD, we ask, do you have diabetes, hypertension?” said Hsu. “We never ask, have you had AKI?

“First of all, patients don’t remember. Too, it’s kind of hard to get the records from a while ago. Patients know if they have diabetes, they can tell you, whereas having AKI, people may not remember.” The fact that AKI often occurs during hospitalization for some other serious illness is another contributing factor.

A growing body of research clarifies the aftermath of AKI. In one large analysis by Hsu’s group (Kidney Int 2009; 76:893–899), patients with dialysis-requiring AKI were 28 times more likely to develop stage 4 or 5 CKD at follow-up. There was also more than a twofold increase in the risk of death. Further studies will be needed to clarify the long-term health effects of AKI—not only dialysis-requiring AKI, but also subtler decrements in renal function.

As the new decade begins, there has been major progress in developing standardized definitions and classification systems, research into new diagnostic and treatment approaches, and understanding the risk factors, incidence, and sequelae of AKI. The obvious next step is the development of a unifying approach to the diagnosis and management of AKI worldwide—a goal best met through the development of evidence-based clinical practice guidelines.

That challenge has been taken on by a Work Group of Kidney Disease: Improving Global Outcomes (KDIGO). The Work Group’s task is to develop clinical practice guidelines for the diagnosis, evaluation, classification, prevention, and management of AKI. Publication of the guidelines is anticipated in the first half of 2010.