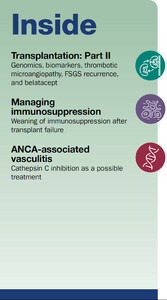 The recent rulings from the conservative majority on the Supreme Court are being felt in every corner of American life—including the kidney space.

A June 21 ruling “…laid out a roadmap for insurers to shift the costs of end-stage renal disease to Medicare,” according to judicial analyst Ronald Mann writing for the Supreme Court-tracking website SCOTUSblog (1).

A statement from the National Kidney Foundation (NKF) stated the organization was “deeply disturbed” by the ruling (2) as was Kidney Care Partners, which was “deeply disappointed” and vowed to have Congress overturn the ruling (3).

The case pitted the Marietta Memorial Hospital employee health insurance plan against national dialysis provider DaVita. The issue began in 2018 when Marietta's plan did not include any in-network dialysis providers, meaning that all patients requiring dialysis would face increased out-of-pocket costs from out-of-network providers. The Marietta insurance plan also drastically cut the rates it paid providers to amounts based on Medicare rates. In contrast to the way the plan generally reimbursed out-of-network providers at a “reasonable” fee determined by health care industry standards, the plan singled out kidney dialysis providers for reimbursement at an “alternative” rate, pegged at 70% to 125% of the Medicare rate.

DaVita sued, saying that Marietta's action violated the Medicare Secondary Payer act, which lays out rules for coverage of dialysis to prevent cost-shifting, according to Daniel Weiner, MD, MS, a nephrologist at Tufts Medical Center and a member of the ASN Policy and Advocacy Committee. The law provides that private insurers are the primary insurers for 30 months after a diagnosis of end stage renal disease (ESRD), after which Medicare kicks in as the primary insurer.

A 7 to 2 majority of the court sided with Marietta. The ruling, written by Associate Justice Brett Kavanaugh, said that because Marietta offered the same benefits to all its enrollees, it did not “differentiate” between those with and without ESRD. Kavanaugh said Marietta “provides the same benefits, including the same outpatient dialysis benefits, to individuals with and without end-stage renal disease.”

Associate Justices Elena Kagan and Sonia Sotomayor dissented, with Kagan writing the dissent, which asserted that the majority opinion—that the plan does not differentiate between those with ESRD and those without it—“flies in the face of both common sense and the statutory text. One fact is key to understanding this case: Outpatient dialysis is an almost perfect proxy for end stage renal disease. That a proxy is only 99.5% (not 100%) accurate should make no difference. A tax on yarmulkes remains a tax on Jews, even if friends of other faiths might occasionally don one at a Bar Mitzvah.

“As the majority recognizes, the [Medicare Secondary Payer act's] renal disease provisions were designed to prevent plans from foisting the cost of dialysis onto Medicare. Yet the court now tells plans they can do just that, so long as they target dialysis, rather than the patients who rely on it, for disfavored coverage. Congress would not—and did not—craft a statute permitting such a maneuver,” Kagan wrote.

“I think that Kagan and Sotomayor got it right when they said that this decision flew against common sense,” David White, ASN regulatory and quality officer, said in a July 6 ASN podcast.

The kidney community was swift in its condemnation of the ruling and its potential consequences if other insurers follow suit with Marietta's practice of excluding dialysis from their networks.

“Unfortunately, the Supreme Court's ruling makes it easier for plans to provide insufficient coverage for kidney failure and in doing so, puts patients in the middle of a longstanding feud over the price of dialysis and its availability,” said Kevin Longino, chief executive officer of NKF. “For patients, the impact of the court ruling cannot be understated,” Longino said. “Some individuals with kidney failure will have to pay for both Medicare benefits (which cover their dialysis needs) AND their [employer-sponsored] benefits…. Other patients may have to transition to Medicare completely and potentially lose supplemental benefits. Others still might choose to leave the workforce rather than have their wages subsidize benefits that are not fully valuable to them. In each of these scenarios, patients lose their agency to select the health plan that maximizes affordability and access, as well as the ability to fully engage in meaningful work” (2).

“The insurer practice at issue—shifting patients prematurely to Medicare—will exacerbate inequalities in access and quality care for an already vulnerable population,” said John P. Butler, chair of Kidney Care Partners. “This ruling is a blow to promoting affordable patient choice and instead unfairly shifts costs to the American taxpayer. We feel this decision leaves patients with ESRD vulnerable to discriminatory and inequitable insurer practices…” (3).

A shift to Congress?

Tufts’ Weiner said that “providers are not blameless” in the push by insurers to get out from under the high cost of dialysis, given the wildly different amounts charged, with providers who have dominant market shares sometimes charging 10 times what Medicare pays. He noted that if Marietta's practice becomes widespread, the US Congress is bound to take note because shifting tens of thousands of dialysis patients onto Medicare could cost the government hundreds of millions to billions of dollars a year.

“We stand ready and willing to work with Congress and other policymakers to address the gap created by today's ruling and clarify the intent of the Medicare Secondary Payer Act to better protect patients from exclusionary measures like this,” said Kidney Care Partners’ Butler. “More must be done to ensure that no one is denied or discriminated against because of the treatment they need because of their disease” (3).

“The American Kidney Fund is profoundly concerned about the ramifications of the Supreme Court opinion,” said the organization's President and Chief Executive Officer LaVarne A. Burton. “With this decision…patients may lose vital benefits, and they may not have the ability to select the health plan that they need to survive and that best works for their personal circumstances. People who live in underserved communities, including Black and rural Americans, are hit hardest by kidney failure. AKF is concerned that this ruling will exacerbate the disproportionate impact that kidney failure has on these communities and jeopardize access to life-saving care. The American Kidney Fund…will strongly advocate for policy solutions to address the challenges created by this Supreme Court ruling” (4).

A statement from Dialysis Patient Citizens said, “A U.S. Supreme Court ruling has nullified the law that protects dialysis patients from discrimination by insurers, threatening the system of financing kidney care that has stood for 40 years…. We and other ESRD patient advocates will go back to Congress immediately to clarify the rules once and for all” (5).

Furthermore, Longino said that “NKF is committed to working with the kidney care community to ensure that health plans are required to cover medically necessary maintenance dialysis services…. Especially in the face of the High Court's ruling, we will accelerate our advocacy to ensure that patients have access to [high-quality], affordable treatment options for their kidney failure” (2).

The kidney care community appears to be rallying around Justice Kagan's comment in her dissent: “Congress will have to fix a statute this court has broken.”