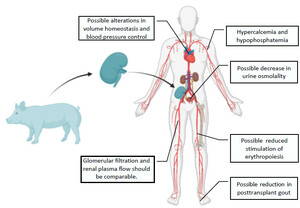 In 1964, the first kidney xenotransplant from a chimpanzee to human was performed successfully (1). Although the recipient survived 9 months, subsequent animal-to-human transplants were limited by immunologic barriers and the need for a sustainable organ source (2). Pigs soon became the ideal organ source because they produce large litters and mature rapidly, and availability is virtually unlimited (2, 3). Pigs have organs comparable in size and function with humans and lower risk of zoonoses, and their hormones and tissues are already used, suggesting positive public opinion (2, 3). The primary limitation of using pigs for xenotransplantation was the cross-species immunologic barrier (2, 4). The development of novel gene-editing technology to “humanize” the pig organ, however, has enabled successful pig-to-non-human primate (NHP) models and a return to animal-to-human experimentation (5–7).

The pig-to-decedent, or Parsons, model demonstrated important safety and feasibility features of kidney xenotransplantation (5). First, no hyper-acute rejection occurred, consistent with the negative pre-transplant pig-to-human crossmatch. Second, relative hemodynamic stability was maintained intraoperatively, and vascular anastomotic integrity was maintained at the higher human blood pressures. Third, no porcine endogenous retrovirus transmission was observed. Given the physiologic derangements of the brain-dead recipient (8), however, this pre-clinical model was not designed to assess xenotransplant physiologic function. Notably, although the kidneys made urine, they did not clear creatinine.

Given the complex, systemic functions performed by the human kidney, including filtration, electrolyte balance, volume status, blood pressure, and stimulation of erythropoiesis, xenograft physiologic compatibility requires evaluation (Figure 1). Although phase 1 clinical trials are needed, the physiologic findings from pig-to-NHP models, as previously reviewed by Iwase et al. (9), can be leveraged to hypothesize which kidney functions may be normal or altered in living human xenotransplant recipients (10).

Although pig-to-NHP models suggest that some aspects of renal xenograft physiology may differ from the human kidney, these differences may be successfully managed. Although most serum electrolyte concentrations remained within normal human limits in NHP recipients, gradual and mild hypercalcemia and late hypophosphatemia have occurred (9). Similar to allotransplantation, this could be managed with increased non-dairy dietary intake and oral phosphorus supplementation. Additionally, anemia among NHP recipients has been reported (9). This may be secondary to immunosuppression, blood draws, or incompatibility of NHP and pig erythropoietin (9, 10). Although a high degree of homology has been noted between human and pig erythropoietin (10), incompatibility could be managed with recombinant human erythropoietin, a common practice for anemia among patients with chronic kidney disease.

Pig xenografts may be incompatible with other aspects of human renal physiology. Intermittent hypovolemia has been noted among NHP xenograft recipients, although oral intake was not increased in a compensatory manner (9). Whereas saline infusions resolved this issue, and normal fluid balance was otherwise maintained, some hypothesize that these abnormalities may be related to incompatibilities in antidiuretic hormone (ADH) or the renin-angiotensin-aldosterone system, which may affect human recipients (9, 10). Pig ADH differs from NHP or human ADH, which may result in a decreased ability to concentrate urine in human recipients (10). However, the ability to concentrate urine was preserved in NHP experiments (urinary osmolarity pre-transplant, 296 ± 133 vs. posttransplant, 405 ± 102 mOsm/kg; p = 0.22) (11). Additionally, human angiotensinogen cannot be cleaved by pig renin. This could be countered by the observed normal renin levels in many end stage kidney disease patients from native kidney renin production (12). Furthermore, with optimization of oral fluid and salt intake, as is needed early after allotransplantation, volume regulation and blood pressure control may not be major issues in human xenograft recipients but will need to be carefully monitored (9, 12).

The primary immunologic hurdle has been overcome, and xenotransplantation may be rounding that “very long corner” (1). Kidney xenograft physiology requires greater understanding to ensure that functional compatibility with human recipients can be maintained or managed (10). Clinical trials are a suitable next step to move kidney xenotransplantation forward as a solution to the organ shortage.