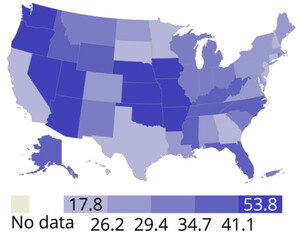 The kidney allocation policy within the United States was initially established in 1987 to promote the equitable and utilitarian distribution of deceased donor kidneys (1). The policy, managed by the United Network for Organ Sharing (UNOS)/Organ Procurement and Transplantation Network (OPTN), was extensively revised in 2014 to increase the utilization of available kidneys, reduce regional variability in access to transplantation, and improve posttransplant outcomes. Major changes at the time included the introduction of the Kidney Donor Profile Index (KDPI) and Estimated Post Transplant Survival (EPTS) scores as estimates of kidney quality and projected recipient survival, respectively, and also the elimination of regional allocation rule variations. Kidneys were allocated locally first, then regionally, and then nationally, although exceptions were made for zero-mismatched kidneys and for highly sensitized candidates. The major benefits of the change in the kidney allocation policy included a marked increase in the number of transplants for highly sensitized patients and also a decrease in the number of age-mismatched kidneys. Unfortunately, the longer cold ischemic time associated with a higher rate of delayed graft function, necessitating dialysis within the first week after transplantation. This, in turn, associated with small, although significant, decreases in allograft longevity (2–4).

Persistent inequities in regional access and waiting times for transplantation combined with high kidney discard rates prompted the Department of Health and Human Services to require UNOS to further refine the policy to specifically address such issues (Figure 1).

UNOS embarked on an exhaustive and, at times, acrimonious process, which culminated in the current kidney allocation system (KAS) implemented in March 2021. The biggest change was the elimination of donor service areas in which kidneys procured within a region were primarily allocated within the same region. This has been replaced with the concept of kidney allocation prioritization within a 250-nautical mile radius of the organ procurement center, similar to that previously implemented for the allocation of liver and lung allografts.

So here we are now, more than 15 months later: How has this change gone? The early experience has been somewhat mixed. Most programs initially experienced a marked increase in the volume of organ offers, which at times, has stressed existing resources. This has dissipated as UNOS revamped its electronic systems to incorporate more accessible offer filters. Rohan et al. (6) reported an increase in the number of deceased donor kidneys transplanted, although with longer waiting time and higher KDPIs, which have increased the delayed graft function rate. It will take time before a broader sense of the impact of the KAS is seen. It should be noted that the increasing number of deceased donor transplants performed in the United States predates the current iteration of allocation policy (Figure 2).

UNOS is now seeking public input and commentary on the concept of continuous distribution, which combines all matching factors into a single composite score to allocate deceased donor organs, similar to that already implemented for lung allocation (7). If implemented, this would be the fourth major iteration of the KAS.