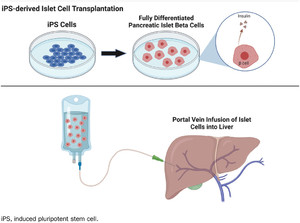 Pancreatic Islet Cell Transplantation: Are We Getting Closer?

For the greater part of the 20th century, exogenous insulin administration and whole organ pancreatic transplantation served as the predominant therapeutic interventions for patients with type 1 diabetes mellitus. The success of the Edmonton group in achieving insulin independence in the early 2000s via islet cell transplantation in a cohort of patients with autoimmune diabetes led to renewed optimism that this treatment could serve as an alternative to solid organ transplantation (1). However, 16 years later, a shortage of donor pancreatic islet cells remains a major challenge in increasing the scale of human allogeneic islet transplantation.

Various novel approaches to alleviate the donor shortage have been studied; however, a promising treatment offered by Vertex Pharmaceuticals seeks to eliminate this obstacle. In collaboration with the lab of Douglas Melton, Xander University Professor at Harvard and an Investigator of the Howard Hughes Medical Institute, Vertex has generated VX-880, an investigational stem cell-derived, fully differentiated pancreatic islet cell replacement therapy for patients with type 1 diabetes (2).

A game-changing therapy, VX-880 has the potential to completely obviate the need for an organ donor. In March 2021, the collaborators initiated a phase 1/2 clinical trial to evaluate the safety, tolerability, and efficacy of VX-880 (3). Seven months later, Vertex issued a press release to announce positive day 90 data for the first patient recruited to the phase 1/2 trial. Brian Shelton, the patient in question, whose identity was revealed in a feature in The New York Times, had lived with autoimmune diabetes for nearly 50 years before receiving a single infusion of VX-880 at one-half the target dose (4). In conjunction with immunosuppression therapy, Shelton demonstrated successful engraftment and restoration of insulin production. Furthermore, rapid improvement in fasting and stimulated C-peptide, glycemic control, and HbA1c were observed, along with a 91% decrease in daily exogenous insulin administration. These results are certainly encouraging for the continued progression of the VX-880 clinical studies, although what makes them truly striking is that they were achieved at one-half the target dose.

Perhaps the most transformative advancement to extrapolate from these early results is the potential for a rapid expansion of the donor islet pool readily available to patients with type 1 diabetes. Without the need for a deceased donor, stem cell-derived VX-880 offers new hope for the large-scale feasibility of clinical islet transplantation. However, beyond that, our ultimate goal should be to deliver islet cell transplantation without the need for a robust immunosuppression regimen, thus mitigating the risk for opportunistic infections among recipients. Whether this comes from Vertex's already-developed encapsulated islets or through another mechanism, such as gene-editing technology or immunoprotective implantation devices, remains to be seen.

Regardless, future trials involving VX-880 must explore the attrition of these stem cell-derived islets after transplantation. Do the cells functionally decline over time? Will a patient potentially need multiple infusions to remain euglycemic? If so, would the multiple infusions precipitate a donor-specific alloimmune response, subsequently driving sensitization of the recipient and thus, making future infusions progressively less effective? These are questions that must be addressed if we are to proclaim VX-880 a landscape-changing cell therapy for autoimmune diabetes. Until then, it will be interesting to follow the continued progression of this trial to see if these results can be generalized to a larger cohort of patients.