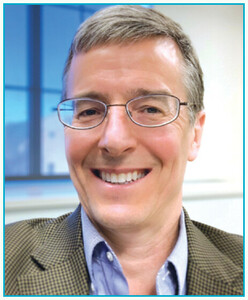 MacArthur Fellow to Speak on Wearable and Implantable Medical Devices

A prolific inventor and entrepreneur will present a state-of-the-art lecture on “Wearable Microfluidic Devices and Implantable Electronic Systems for Kidney Health” on Sunday, November 6.

The speaker will be John A. Rogers, PhD, who is the Louis A. Simpson and Kimberly K. Querrey professor in the Departments of Materials Science & Engineering, Biomedical Engineering, Neurological Surgery, Electrical and Computer Engineering, Mechanical Engineering, and Chemistry at Northwestern University Feinberg School of Medicine in Chicago, IL, where he is also director of the Querrey Simpson Institute for Bioelectronics.

Dr. Rogers has published more than 850 papers and is co-inventor on more than 100 patents, some 70 of which are licensed and in active use by large companies or startups that he co-founded. His research includes fundamental and applied aspects of nano- and molecular-scale fabrication, as well as materials and patterning techniques for unusual electronic and photonic devices, with an emphasis on bio-integrated and bio-inspired systems.

His research seeks to understand and exploit “soft” materials, such as polymers, liquid crystals, and biological tissues, as well as hybrid combinations of them with unusual classes of micro/nanomaterials in the form of ribbons, wires, membranes, and tubes.

His team has developed wearable electronics that bend and stretch with the human body. These devices include a flexible implant that supplies electrical stimulation to premature infants’ nerves and dissolves after it is no longer needed, as well as a skin-like sticker that monitors babies’ vital signs in Neonatal Intensive Care Units. In partnership with the Bill & Melinda Gates Foundation, Dr. Rogers’ team has deployed thousands of these new devices across countries in Africa and Asia to monitor the health of newborns and their mothers.

His research has been recognized by many awards, including a MacArthur Fellowship, the Lemelson-MIT Prize, the Smithsonian American Ingenuity Award in the Physical Sciences, the Benjamin Franklin Medal from The Franklin Institute, and a Guggenheim Fellowship.

Dr. Rogers received Masters degrees in physics and chemistry and a doctorate in physical chemistry from the Massachusetts Institute of Technology (MIT). From 1995 to 1997, he was a junior fellow in the Harvard University Society of Fellows.

He joined Bell Laboratories as a member of the technical staff in the Condensed Matter Physics Research Department in 1997 and served as director of this department from 2000 to 2002. He then spent 13 years on the faculty of the University of Illinois at Urbana-Champaign, including as director of the Frederick Seitz Materials Research Laboratory. He joined Northwestern in 2016.