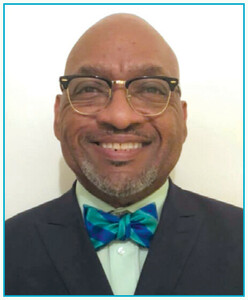 Patient Advocate Will Speak on Education for Transplant Recipients

A transplant patient with a challenging story to tell will speak on “Incorporating Mental Health Practices by Increasing Psychosocial Education for Kidney Recipients” in the Celeste Castillo Lee Memorial Lectureship on Friday, November 4.

The presenter will be Patrick O. Gee, Sr., PhD, who is the founder and chief executive hope dealer at iAdvocate, a nonprofit, faith-based health and wellness organization. He is also an ordained minister at Mountain Movers Ministry in Richmond, VA. He retired from his position as chief of security at the Virginia Department of Corrections in 2008.

Dr. Gee's end stage kidney disease from diabetic kidney disease was treated with peritoneal hemodialysis until he received a transplant in 2017. Upon waking from the transplant surgery, he discovered that his newly transplanted kidney was not functioning due to a delayed graft function. As a result, he had to endure 24 hours of hemodialysis every other day until his kidney started to work. Five days after his surgery, his physician told him that he needed additional surgery to remove a blood clot in his neck. Three days after that procedure, he underwent surgery for a hemorrhaging problem, and 17 days later, he had a fourth surgery to create a laparoscopic peritoneum window so he could drain internally.

Dr. Gee uses his personal experiences to teach, coach, mentor, and educate others on how best to manage their difficult situations. He is an advocate for those living with chronic kidney disease and the morbid conditions that contribute to this disease, such as diabetes, cardiovascular disease, hypertension, and obesity. He is particularly passionate about speaking on behalf of the underserved, undervalued, and disenfranchised communities of color to give them a voice in their quality of life and equitable health care access.

To this end, he serves in several capacities. He is a patient representative for the ASN Diabetic Kidney Disease Collaborative Task Force; a vice chair of the Patient and Family Partnership Council of the Kidney Health Initiative; on advisory boards of Home Dialyzors United, APOL1 Long-term Kidney Transplantation Outcomes Consortium, Center for Dialysis Innovation, and Patient & Family Centered Care Partners; and on US Food and Drug Administration and National Institute of Diabetes and Digestive and Kidney Diseases committees on diversity, inclusion, and outreach in medical device development; clinical research; and transplants.