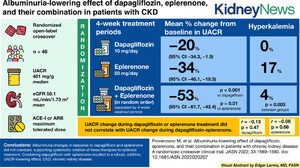 Adding Mineralocorticoid Receptor Antagonists to SGLT2 Inhibitors: Should We Push the Envelope?

Search for other papers by Matthew A. Sparks in
Current site
Google Scholar
PubMedClose

In recent years, the addition of sodium glucose co-transporter 2 (SGLT2) inhibitors to maximally tolerated renin-angiotensin system (RAS) blockade for the treatment of diabetic and non-diabetic proteinuric kidney disease has been a monumental development for the field of nephrology. Both the CREDENCE and DAPA-CKD trials showed a significant reduction in a composite kidney outcome (doubling of serum creatinine, progression to end stage kidney disease, and death from kidney or cardiovascular causes) and a reduction in albuminuria (1, 2). Similarly, in the recent FIDELIO-DKD and FIGARO-DKD trials, use of the non-steroidal mineralocorticoid receptor antagonist (MRA) finerenone showed a significant reduction in a composite kidney outcome and a reduction in albuminuria (3, 4). Post hoc analyses of these trials showed that the nephroprotective effects of both drug classes (SGLT2 inhibitors and MRAs) may be complementary, even in addition to RAS blockade. However, these analyses were post hoc and did not address albuminuria reduction. Moreover, questions remain whether traditional steroidal MRAs (spironolactone or eplerenone), which are less expensive, would provide the same benefit as non-steroidal MRAs (finerenone).

The Rotation for Optimal Targeting of Albuminuria and Treatment Evaluation (ROTATE)-3 study, recently published in JASN (5), randomized 46 patients, aged ≥18 years, with urinary albumin excretion ≥100 mg per 24 hours and ≤3500 mg per 24 hours; with an estimated glomerular filtration rate (eGFR) >30 mL/min/1.73 m2 and <90 mL/min/1.73 m2; with serum potassium ≤5 mmol/L; and who were on stable doses of angiotensin-converting enzyme (ACE) inhibitors or angiotensin II receptor blockers (ARBs) for more than 4 weeks. The study used three consecutive open-label crossover treatment periods of 4 weeks each, in which patients were treated with the MRA eplerenone 50 mg once daily, the SGLT2 inhibitor dapagliflozin 10 mg once daily, or a combination of eplerenone 50 mg once daily and dapagliflozin 10 mg once daily.

Persistent albuminuria and poor response to treatment are associated with risk of kidney disease progression and poor cardiovascular outcomes. The ROTATE-3 study suggests that the combination of SGLT2 inhibitors and MRA, in addition to maximal RAS blockade, is better at reducing albuminuria than either treatment alone. Importantly, patients showed a varied response to the different classes of medicines, indicating that patients who do not respond to one treatment may benefit from the other. Intriguingly, the addition of SGLT2 inhibitors to MRA therapy may reduce the incidence of hyperkalemia, potentially improving the safety profile of MRAs.

These findings support the need for large randomized controlled trials assessing clinical outcomes of these two medication classes in combination. Moreover, traditional steroidal MRAs can be considered until direct comparison studies are performed with the novel non-steroidal MRA finerenone, unless patients are not able to tolerate steroidal MRAs. The ROTATE-3 study sheds light on this important clinical conundrum. The next era of kidney disease treatment is coming into focus and appears to be triple therapy: RAS blocker, SGLT2 inhibitor, and MRA.