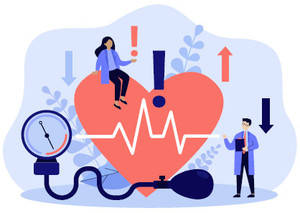 When Alfred Cheung, MD, co-chair of the Kidney Disease Improving Global Outcomes (KDIGO) 2021 Clinical Practice Guideline update on the Management of Blood Pressure (1), and his colleagues were preparing to release their new guideline on blood pressure management in patients with chronic kidney disease (CKD), they knew it might “ruffle some feathers.”

But after careful consideration, their workgroup came to a conclusion that they should make the right recommendation to shoot for a target systolic blood pressure of less than 120 for patients with CKD, a recommendation supported by the results of the Systolic Blood Pressure Intervention Trial (SPRINT) (2) and a large meta-analysis (3). Because all large outcome trials in hypertension were using standardized, not routine, blood pressure, they also made that target contingent on using standardized office-based blood pressure. They expected both recommendations would be controversial—and they were right.

Standardized blood pressure measurements, which require a series of steps to ensure a reliable reading, were used in SPRINT and are also recommended by the American College of Cardiology/American Heart Association (ACC/AHA)'s 2017 guideline for the management of high blood pressure (4). But this set of procedures for measuring blood pressure is far from routine in clinics crunched for time and under pressure to move patients efficiently through the office. Instead, most routine blood pressure measurements skip many of the steps, which can result in readings that can be as much as 10-30 points higher and sometimes lower than a standardized measurement for the same patient (5).

“You are slowing down the clinic workflow, although not by much,” explained Cheung, who is also Chief of the Division of Nephrology & Hypertension at the University of Utah. “Many people do not like to do that. But we are adjusting patients' medications based on these often unreliable measurements if we stick to routine measurement techniques.”

Without a reliable measurement, Cheung said, it is impossible to recommend a blood pressure target, so he and his colleagues were willing to “push the envelope” in the hope that over time more practices will adopt the recommendations despite some obstacles.

“If you measure blood pressure carefully, we are comfortable making the target below 120 mm Hg systolic with individualization as needed,” he said. The 120 target is not recommended for patients with a kidney transplant or those on dialysis or pediatric patients.

Cheung and his colleagues felt confident in the recommendation because SPRINT for the first time provided evidence of a 25% risk reduction in cardiovascular events or deaths from cardiovascular causes in patients with CKD who were shifted to the lower target of 120 mm Hg compared with a 140-mm Hg target. It also found a 27% reduction in overall mortality, as well as cognitive benefits, all with an apparently overall neutral effect on kidney health, Cheung noted. He acknowledged that some clinicians may be concerned that tight control could lead to more adverse events, particularly in older patients, but he said the risk/benefit analysis did not support those concerns.

“We think the risk/benefit ratio is really in favor of tight blood pressure control,” he said.

In fact, a new large meta-analysis of 58 randomized trials enrolling almost 300,000 participants published earlier this year (6) did not find an association between anti-hypertensive treatment and falls. The study did not look specifically at patients with CKD. It did find an association with mild hyperkalemia, hypotension, fainting, and acute kidney injury. The estimated association with kidney injury was small and somewhat uncertain, said senior author James Sheppard, PhD, university research lecturer at the University of Oxford, in an interview.

“Acute kidney injury can be problematic but also quite mild and reversible if given the right treatment,” he said.

Sheppard said he thought the new KDIGO guideline was balanced, based on good quality data, and did a good job highlighting some populations for whom the risks and benefits of intensive blood pressure lowering may be less well understood or where the risks may outweigh the benefits. Like the guideline, he emphasized the importance of taking an individualized approach to blood pressure management.

“Ultimately, it is up to the individuals [as to] what treatment they take,” he said. “The important thing is to give them as much information as possible so they can make an informed decision.”

If the new guideline is implemented widely, it could have a dramatic effect on reducing cardiovascular events and death in patients with CKD, according to an analysis by Kathryn Foti, PhD, a postdoctoral fellow in the Department of Epidemiology at the Johns Hopkins Bloomberg School of Public Health, and her colleagues (7). Under the new guidelines, 69.5% of adults with CKD would be eligible for blood pressure-lowering therapy, compared with 49.8% under the 2012 KDIGO guideline or 55.6% under the American College of Cardiology/American Heart Association (ACC/AHA) 2017 guideline. It may also have an impact on improving health equity. Both hypertension and CKD are more prevalent in Black people, Foti said.

“There is a real opportunity to improve blood pressure control, particularly in high-risk patients,” Foti said. “If we are able to effectively implement this guideline, there are implications for getting closer to health equity.”

Additionally, the number of patients with CKD and albuminuria eligible for treatment with an angiotensin converting enzyme inhibitor (ACEi) or an angiotensin II receptor blocker (ARB) would increase to 78.2% under the new KDIGO guideline from 71% under the previous version. Despite the previous guideline, Foti noted that only about 39% of eligible patients with albuminuria are currently taking an ACEi or ARB, based on data from the National Health and Nutrition Examination Survey. Foti attributed this low use of ACEi/ARB to the fact that often albuminuria is not measured and noted that more consistently measuring it may lead to more guideline-directed care.

Cheung noted that the recommendations on ACEi/ARBs are not much different from previous recommendations and focus primarily on the blood pressure-lowering benefits. Cheung and colleagues provide a table that helps organize the information in the revised guideline.

Preparation is key to ensuring a reliable blood pressure measurement, said Cheung. He noted that standardized office-based blood pressure measurement requires that the patient is resting quietly with no one talking to him or her for at least 5 minutes before the blood pressure is taken. Otherwise, he cautioned, the reading could be skewed by, for example, a patient running upstairs or getting into an argument with his or her spouse just before the reading. Patients should also avoid caffeine, exercise, or smoking 30 minutes before a reading.

The patient should be seated with his or her feet on the ground and arm resting at heart level, according to the guideline. The blood pressure cuff should be large enough to fit properly, Cheung said. An average of two or more readings obtained on two or more occasions is also recommended.

“Once the nurses and medical assistants are trained, it becomes second nature,” he said.

“It'll be nice if you have an automated machine, but it is far less important,” he said. “We are not trying to ask everybody to buy fancy machines.”

“Ultimately, we are using these readings to make a decision about a patient taking lifelong treatment, and so you want to be sure you are basing it on good quality measures,” Sheppard said.