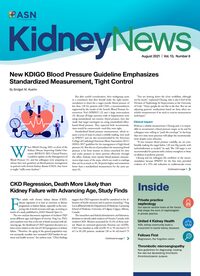 The case for more PD

According to the United States Renal Data System (USRDS)'s Annual Report for 2020, the number of incident patients with end stage kidney disease (ESKD) in 2018 was 131,636, which was an increase of 2.3% from the year prior (1). Although all-cause mortality increased among patients on dialysis in the first half of 2020 by 29% and 48% for those with a functioning kidney transplant compared with the same 5-week period in 2019 (2), overall mortality in patients with ESKD has trended downward, leading to an increase in prevalent patients on dialysis to a new high of 2042 cases per 1 million people in 2018 (1).

In 2018, there were 14,334 incident patients starting on peritoneal dialysis (PD), up from 10,865 in 2013. We should anticipate that PD prevalence in nursing facilities will increase for the following reasons: the incidence of ESKD in people aged 65-74 years old and 75+ years old reached an all-time high in 2018; PD incidence is on the rise; mortality from PD may be 0.88 for continuous ambulatory PD (CAPD) versus in-center hemodialysis based on the Australia and New Zealand Dialysis and Transplant (ANZDATA) registry (3); ESKD treatment choice (4) models incentivize use of home dialysis modalities; and the cost of PD was $78,159 annually versus $91,795 for in-center hemodialysis, again pushing the Centers for Medicare & Medicaid Services (CMS) to incentivize PD versus in-center hemodialysis (1).

In 2018, CMS released its rules on dialysis care in nursing facilities (5). The highlights of these regulations include the necessity for on-site supervision of dialysis by a trained registered nurse (RN) when a nursing home resident is receiving hemodialysis in the nursing facility and by a trained RN or licensed practical nurse (LPN) when PD is provided. In essence, the nursing facility's dialysis program is subject to the conditions for coverage and an updated ESKD core survey process (6).

I had the opportunity to interview some of the key providers of nursing home dialysis care as well as administrators of nursing facilities that have offered on-site PD. Scott Vavrinchik of Affiliated Dialysis (now Dialyze Direct) raised the concern for “keeping staff proficient to a level of standard of care that we are comfortable with,” as staff turnover tends to be an issue. Technical failure at a skilled nursing facility may increase peritonitis rates, an issue that should be studied more rigorously but has been reported anecdotally by providers. The space necessity for supplies is an issue at most sites.

From the financial perspective, it may not be feasible to send trained PD staff to do exchanges, necessitating the need for stable and trained staff at the skilled nursing facility to avoid technical failure with subsequent complications. Isaac Lifschutz of Legacy Health Services, a provider of skilled nursing and assisted living services, cited nurse turnover rates as a major issue in providing consistent quality PD care at nursing facilities. According to researchers at the University of California, Los Angeles (UCLA), and Harvard Medical School (7), annual median turnover rates at nursing facilities were 94% in 2017 and in 2018, 141% among RNs.

Nola McMullen of Renew Dialysis, a provider of home hemodialysis services in nursing home and rehab facilities, expressed the importance of maintaining best home dialysis practices for the skilled nursing facility patient while at the home. This should include “a partner helping with PD treatments while in the nursing home if willing.” Otherwise, McMullen stated, “The provider (PD program) is obligated to train the nursing home staff.” McMullen also said she felt that policies and procedures must be defined for the PD patient in a nursing facility environment to first contemplate whether PD remains the best modality choice and whether urgent-start patients are an option and to ensure that a “rigorous peritonitis prevention program” is in place.

The incidence of patients choosing PD as a preferred modality is continuing to grow. Moreover, the average age of patients who develop kidney failure is also increasing. Thus, the necessity to consider offering PD in the nursing facility is going to become a more pressing one. The challenges include logistics, staffing, and financial constraints that could be overcome with the development of a guideline for best practice and appropriate compensation by payers for both the home dialysis program and the nursing home provider. In essence, appropriate compensation could lead to more consistent staff, fewer PD technical failures/complications, fewer readmissions, and lower overall cost.