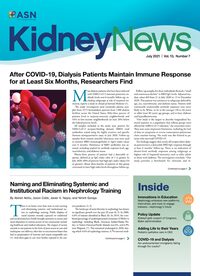 KidneyX, the public-private partnership between the American Society of Nephrology (ASN) and the US Department of Health and Human Services (HHS) to accelerate innovation in the diagnosis, prevention, and treatment of kidney diseases, was included in President Biden's first annual budget proposal for fiscal year 2022 (FY 22), announced by the Biden-Harris administration on May 28, 2020. Following the largest showing of support to date from members of the US House of Representatives and Senate—an effort led by Rep. Suzan DelBene of Washington, Rep. Larry Bucshon of Indiana, Rep. Terri Sewell of Alabama, Rep. Brian Babin of Texas, Sen. Ben Cardin of Maryland, and Sen. Todd Young of Indiana—the Biden administration's inclusion of KidneyX in its annual budget proposal cements a legacy of robust bipartisan support of the program across presidential administrations and both chambers of Congress.

Citing KidneyX's track record of success in “catalyzing both the HHS Advancing American Kidney Health Initiative and interest among patients, caregivers, doctors, startups, investors, and industry to solve important problems for the real-world benefit of kidney disease patients,” the budget proposes a continued federal investment of $5 million in FY 22 for KidneyX. The Congressional Justification argues that KidneyX is worthy of funding as it “sends a strong signal to the innovation community and to patients that advancing artificial kidney development is a top national public health priority, worthy of additional investment.”

In addition to the crucial support displayed by the Biden-Harris administration, KidneyX has received vital bicameral and bipartisan support in Congress. Nearly 60 representatives and 11 senators—the largest number of members of Congress on record supporting KidneyX—sent letters to the Senate and House Labor, Health and Human Services, Education, and Related Agencies Appropriations Subcommittees calling for a $25 million investment in KidneyX. Both the House and Senate letters highlight the recent progress made by the program in “incentivizing innovators to fill unmet patient needs through a series of prize competitions, de-risking the commercialization process by fostering coordination among federal agencies and creating a sense of urgency on behalf of patients and families,” demonstrated by the success of the previous 4 prize competitions run by KidneyX. The letters note the racial health disparities and extra risk of COVID-19 among people with kidney diseases and raise the development of a wearable or implantable artificial kidney through KidneyX as a worthwhile investment.

The advocacy efforts of ASN and key partner organizations within the kidney community led to KidneyX securing $5 million in congressional appropriations in both FY 20 and FY 21, totaling $10 million since the start of the program, a testament to the efforts of the kidney community and congressional champions. Although Congress has complete discretion at what level to fund various federal agencies as dictated by the US Constitution, the president's budget serves as a key indicator for the administration's priorities. KidneyX's inclusion in the budget serves as a vote of confidence for the program coming out of the presidential transition.

This prioritization was confirmed at a recent congressional hearing on President Biden's FY 22 budget. Noting that she was “particularly pleased” by the inclusion of KidneyX in the budget, Rep. DelBene described her hope that the administration match the $25 million in private-sector funding provided to KidneyX to date, asking HHS Secretary Xavier Becerra what support can be expected “from the administration in the coming years,” especially given the “striking example of the health disparities in our country” posed by kidney diseases and the impact of COVID-19 on kidney health. Secretary Becerra responded that in the budget, the administration does “make a commitment to continue KidneyX, because it's so important that we try to address these types of conditions as quickly and early as possible and as you mentioned, oftentimes, it disproportionately impacts communities of color.”

The congressional letters and the program's inclusion in President Biden's budget proposal reflect KidneyX's successful efforts to accelerate innovation in the prevention, diagnosis, and treatment of kidney diseases. To date, KidneyX has supported more than 50 innovators across four prize competitions in 22 states. Building on the achievements of previous competitions, KidneyX launched the Artificial Kidney Prize in 2020 as a long-term commitment to accelerate the development of an artificial kidney that can be worn or implanted. Winners of the Artificial Kidney Prize's Phase 1 will be announced during summer 2021, and KidneyX will begin accepting submissions for Phase 2 in fall 2021. The United States is uniquely positioned, through KidneyX, with an opportunity to be the global leader in the development of the world's first artificial kidney, an innovation that is needed across the world by the 850 million people living with kidney diseases. ASN will continue to advocate that KidneyX receive $25 million in congressional funding to aid its efforts to support the development of the artificial kidney.