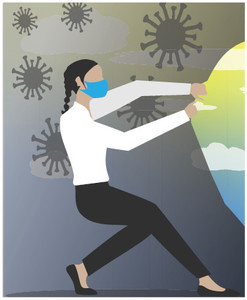 The Second COVID-19 Wave in India: Awaiting Light at the End of the Tunnel

The unfolding story of COVID-19 in India has shown how a narrative can change quickly. It was only a few months ago that experts around the world were wondering what explained India's relatively cheap escape (until then) from the ravages of the COVID-19 pandemic. India is now back in the news, but this time, the reports are highlighting the utter collapse of the healthcare system, shortage of critical supplies and hospital beds, people dying on the curbsides, and striking images of over-busy cremation and burial grounds. Amid this chaos, care of patients with chronic illnesses like kidney diseases has been marginalized (1).

The causes of this second wave of the pandemic have been debated but can be largely divided into changes in the virus genome and people-related factors. With regard to the former, it has been a combination of the B.1.1.7, first identified in the United Kingdom, or the “Kent” variant, and the new B.1.617, first identified in India (2). This SARS-CoV-2 variant contains mutations in the spike proteins that portend enhanced viral infectivity with potential to escape neutralizing antibodies (however, this has not been confirmed) and has been designated by the World Health Organization (WHO) as a “variant of concern.” (3)

It is convenient to blame the virus because that deflects attention from the people-related factors, such as the failing healthcare system or misguided human behavior.

As the cases declined from September 2020, and the country emerged from one of the strictest lockdowns in the world (10 weeks of complete lockdown followed by phased relaxation over 8 months), which had a major impact on the economy, India let down its guard and concluded that the pandemic was over. Serosurveys had shown that 30% to 60% of the population had been infected, leading to a belief that “herd immunity” had already been achieved or was around the corner. There was a sense of triumph and talks of Indian exceptionalism—propagated by the community and political leadership—and a premature euphoria over the protection by herd immunity. Large political rallies and religious gatherings involving tens of thousands of individuals were held, with little adherence to COVID-19-appropriate behavior. Social events that involved large gatherings like weddings, postponed during the first wave, were resumed. Inevitably, once the transmission started, it spread like wildfire. Professor Ashish K. Jha, Dean of Brown School of Public Health, has called the Kumbh Mela (religious mega-gathering) the largest superspreader event in the world (4).

During the Indian winter, when the caseloads were low, the health system also rapidly de-escalated. Rather than further improve preparedness in anticipation of a possible second wave (as had occurred in other parts of the world), it shut down COVID-19 facilities and ignored the need to bolster intensive care services. This meant that when the inevitable wave hit with ferocity, and people started seeking hospital care in large numbers, beds were scarce, hospitals ran out of oxygen, and healthcare professionals were stretched far beyond their capabilities. This culminated in thousands of deaths that could have been prevented.

As the vaccine capital of the world, India was well poised to vaccinate its population. However, the sense of complacency and misinformation meant many people were unwilling to get vaccinated. The government played its part at the global level by committing to export vaccines as part of its Vaccine Maitri (vaccine diplomacy program) (5). Initially, vaccinations started in a phased manner, with the elderly and those with comorbidities prioritized, but as caseloads rose sharply, the government announced opening it up to all adults. The resulting clamor and failure to increase the supply to match demand led to a massive shortage of vaccines (6). There have been issues with production and supply as well—the vaccination rate came down to 1.6 million doses/day from a peak of 3.5 million doses/day. It is estimated that only about 8% of the population has received one dose of the vaccine (7). Vaccinating India out of the pandemic, as in Israel, the United States, and the United Kingdom, seems unrealistic in the near future unless the country ramps up production and/or gets help in obtaining adequate stockpiles very soon.

In this chaotic environment, desperation to seek any effective therapy and the lack of any clear authoritative evidence-based guidance are driving the use of low-quality care including several completely outlandish remedies. Despite weak evidence of their benefit, there have been desperate searches for plasma therapy, in addition to multiple antimicrobials. This has prompted many academics to appeal to government for responsible, evidence-based guidelines (8). It is common to see infected patients carrying prescriptions that have more than 10 drugs, encouraging profiteering and black marketing. Practitioners of alternative systems of medicine openly claim curative powers in remedies peddled by them.

Finally, major doubts have been raised about the reporting of cases and COVID-19 deaths. Epidemiologists and data modelers estimate that the actual number of daily cases could be 5-10 times the official figures, which at the time of writing, is around 400,000/ day. Similarly, Professor Murad Banaji of Middlesex University, London, believes the actual death count could be in excess of 1 million, against the officially reported 240,000 (9).

With a country as densely populated as India, the virus has managed to spiral out of control due to the casual approach toward COVID-19-sensible behavior by the public, mismanagement by the administration, and lack of adequate healthcare facilities including hospital beds, oxygen supply, and vaccination, compounded by the government's haste in exporting medical resources to other countries. India has just about two intensive care unit (ICU) beds for every 100,000 people, compared to 29 in Germany (10).

The large-scale disruptions in dialysis and transplant services have been well documented (1). Some of these, in particular transplants, had just resumed when the second wave shut them down once again. Even though dialysis patients were included in the priority list for vaccinations, only a small portion has actually been vaccinated.

There have been a few examples of the community coming together and developing appropriate responses. A COVID-19 hemodialysis unit preparedness checklist designed by prominent nephrologists from around the country made dialysis practices during COVID-19 uniform across India (11). The city of Mumbai set up a project by the local government (Project Victory), which came up with a website to facilitate the coordination of care (https://covidialysis.in/) for COVID-19-positive or suspected patients. This significantly eased the pressure on treating nephrologists as well as patients and brought about a significant drop in the number of skipped dialysis sessions. In many communities, an informal network of providers including rural medical practitioners, frontline health workers, non-governmental organizations, and community self-help groups came together to meet with the chronic care needs of the people, including arranging medications and teleconsultations (12).

The ubiquitous shots of ghoulish orange glows of funeral pyres and news of the collapsing healthcare system, mountains of corpses, and the nationwide hunt for oxygen and other medical supplies remind us that this did not happen just over the past 15 months but was 50 years in the making. The systematic neglect of the healthcare system by the political and administrative class and failure of the population at large to make this a mainstream issue on which to ask for accountability from elected representatives have been assimilated in popular consciousness. Only those not familiar with the deficiencies of the system are shocked by what they are seeing. Hope is being expressed that maybe this will be the shock that will jolt the country into undertaking these much-needed reforms. If that were to happen, indeed, that would be a bright and welcome light at the end of this very long and dark tunnel.