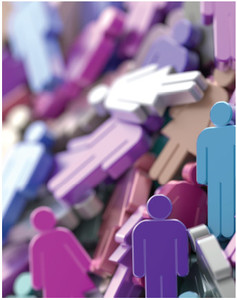 Before the National Institutes of Health (NIH) Revitalization Act, women were largely underrep-resented in clinical trials, partly out of concerns for teratogenic effects. The act, passed in 1993, made it mandatory that clinical trials funded through NIH include data from women and minorities (1).

The percentage of women included in clinical trials has improved significantly since that time (2), although women are still underrepresented with respect to disease prevalence in some reports (3). However, data from men and women are often still aggregated together, and analyses based on sex are often not reported.

Clinical studies often lack sufficient statistical power to examine sex differences, said Christine Maric-Bilkan, PhD, a program director of the Division of Kidney, Urologic, and Hematologic Diseases in the NIH's National Institute of Diabetes and Digestive and Kidney Diseases. “There should be no barriers to reporting data by sex, and many journals are in fact insisting on papers including data by sex, so that should help,” she said.

Females have also been underrepresented in the scientific research underlying these clinical trials. For example, most basic science studies are still performed on male kidneys, and much of what is known about basic physiology and pharmacokinetics is derived from studies performed in males (4). In 2015, the NIH released recommendations that sex be considered in the research design, analyses, and reporting of preclinical studies, although this was not mandated (5).

However, studies of sex differences are still scarce. “The vast majority of preclinical studies are being conducted in males, either in cells or animals,” said Maric-Bilkan. “Unfortunately, this trend is not unique to any one research discipline or field, as a similar male bias has been reported across the board: neuroscience, immunology, cardiovascular, renal, etc.”

Still, some fields have made more research progress in this area than others.

“If we compare ourselves to cancer or cardiology research, we in nephrology are a bit behind in terms of understanding how sex hormones and sex hormone receptors are playing a role in these diseases,” said Eman Gohar, PhD, an instructor in the Division of Nephrology at the University of Alabama at Birmingham. One of her areas of expertise is sex differences in kidney diseases.

Researchers are increasingly realizing that sex and gender influence kidney function in both normal and pathophysiologic conditions. Noting that there is much to learn about the mechanisms underlying these differences, Maric-Bilkan stated: “There is increasing recognition that examining sex and gender differences in disease pathophysiology could lead to development of sex-specific therapeutic treatments.”

To navigate this topic, it is important to clarify sex and gender. The US Institute of Medicine guidelines describe sex differences as biologic differences between men and women. These include differences due to sex hormones but also differences due to chromosomes and sex-specific gene expression. Gender refers to an individual's sense of themselves as a male or female in society (6). Although people often underscore the effects of sex hormones when discussing sex differences in this context, epidemiologic differences between the sexes in kidney disease incidence or progression might reflect a whole host of factors, including socially mediated ones.

But differences due to sex hormones, particularly estrogen, have been the focus of a great deal of the existing research. It is now well recognized that sex hormones have biologic effects extending beyond the reproductive system. Different receptor subtypes for estrogen and testosterone are widely found in many different parts of the body, including the kidney (4).

Premenopausal women appear to be somewhat protected from kidney disease compared with age-matched men across multiple types of nephropathies. This relative protection seems to disappear during menopause. Women who undergo oophorectomy have a higher incidence of chronic kidney disease (CKD) as well, also suggesting a protective role for estrogens. Studies in animal models also strongly suggest that as a whole, estrogens, particularly estradiol, exert kidney-protective effects. In contrast, testosterone has been found to promote kidney disease progression in most animal models (4).

However, the picture is complex, especially when data from studies in humans are analyzed. The prevalence of CKD is higher in women than in men, but the prevalence of kidney failure is higher in men (4). Studies contrasting the rates of progression of CKD in men versus women have shown some conflicting results, although the authors of a 2019 systematic review posited that kidney disease progresses more quickly in men (7).

Why the discrepancies in prevalence?

The reasons for these discrepancies continue to be teased out, but multiple mediating factors have been proposed. The use of a single cutoff point of estimated glomerular filtration rate (GFR) to define CKD might lead to an over-diagnosis of CKD in women because it may not account for normal physiologic differences in rates (7). Differences due to sex hormones; sex chromosomes; renal hemodynamics size; and lifestyle factors such as smoking and healthcare use, including earlier initiation of dialysis in men compared with women, may also account for these discrepancies (8).

In some situations, social and cultural factors may mask underlying biologic and physiologic tendencies, making interpretation difficult. “We need to acknowledge differences in access to care, compliance with medications, speed of referral to dialysis, and discrepancies in kidney transplantation in men versus women,” Gohar said.

Maric-Bilkan also underscored the need for more rigorous, well-designed observational studies that focus on defining sex differences in disease development and progression and that consider the sex-specific categorization of kidney disease severity. “These studies should address the role of sex-related biologic differences and differences in psychosocial, lifestyle, and other factors,” she said. “They should take into account the menopausal status of the patients, hormone therapy use, and history of use of oral contraceptives, which may also affect kidney disease progression.”

The pathways potentially mediating the nephroprotective effects of estrogen are still being elucidated.

Immune signaling pathways have also been shown to be affected by sex and sex steroids, and these might also influence differences in kidney pathophysiology. Other potential avenues being explored include differential modulation of reactive oxygen species via redox signaling pathways (10). A research article published by Gohar and colleagues in the Journal of the American Heart Association demonstrates a novel function for the G-protein-coupled estrogen receptor in the kidney (10). Its activity was found to have a direct impact on sodium excretion, influencing blood pressure and kidney excretory function in female rats.

One challenge with working with estrogen as a potential therapy is its broad presence in multiple organ systems and resulting off-target effects. The potential risks/benefits of hormone replacement therapy in menopausal women were brought into question by the famous Women's Health Initiative outcomes, which unexpectedly raised concerns about the cardiovascular impact of such supplementation. Although later analyses have highlighted the importance of properly timing hormone replacement therapy and have raised questions about study design, many clinicians and patients still have concerns about its risks and benefits (11).

Treatments targeting specific subtypes of estrogen receptors may prove fruitful research avenues. For example, Gohar said, one could focus on the G-protein-coupled estrogen receptor that has been shown to elicit protective actions in the cardiovascular and renal systems in females, which might theoretically make them viable drug targets in postmenopausal women.

Much might be learned at the basic science level by studying models of kidney disease in which the female kidney is relatively protected, such as hypertension, acute kidney injury, and diabetic kidney disease. Uncovering the mechanisms that underlie this protection may ultimately contribute to the development of novel therapeutic choices in both women and men.

Gohar pointed out that women's kidneys are physiologically equipped to handle pregnancy, which poses huge challenges in fluid and electrolyte management. She suggested that improving our knowledge of female kidney physiology may ultimately lead to better understanding of preeclampsia and broader insights into pathologic changes in the kidney.

In addition to investigations into the contribution of sex hormones, research into other physiologic and social factors influencing epidemiology will be key. “Studies in other fields have brought to attention that X- or Y-linked genes, parental imprinting, or X mosaicism also contribute to sex differences,” said Maric-Bilkan.

A thorough consideration of potential sex differences is also critical in initial study design. In an analysis of drugs withdrawn by the US Food and Drug Administration from 1997 to 2000, four out of 10 drugs had to be removed because of side effects in women (12). Women and men may experience different drug exposure resulting from differences in drug absorption, distribution, and metabolism as well as body weight. More research attention to these issues might allow for drug approvals in subsets of the population or might point the way toward adjustments of drug dosage in women that might lower toxicity.

Such study designs present research challenges, especially when women are stratified on the basis of premenopausal versus postmenopausal status. But such complexities at least need to be acknowledged and reported, Gohar said.

With the exception of treatments for diseases unique to each sex, very few diseases are currently treated differently in men versus women, Maric-Bilkan said. A better understanding of these issues would provide important data to help move toward more personalized medicine. Ideally, new therapeutic approaches to kidney disease could be tailored based on patients' gender and hormonal status.

“The more studies examining sex differences in renal function and pathophysiology, the more information we will have on what pathways may be targeted for drug development. Also, better understanding of disease pathophysiology could inform how existing therapies may be adapted and optimally used in both women and men,” Maric-Bilkan said.