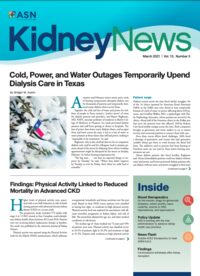 For kidney transplant recipients with screening-detected asymptomatic bacteriuria (ASB), antibiotic treatment does not reduce the risk of developing urinary tract infection (UTI) and may lead to emergence of antibiotic-resistant bacteria, reports a study in Clinical Microbiology and Infection.

The pragmatic, open-label Bacteriuria in Renal Transplantation (BiRT) trial included 199 patients with ASB detected by screening at least 2 months after transplantation. Patients were randomly assigned to receive antibiotic treatment, using a drug active against the causative bacteria, or no treatment. The incidence of symptomatic UTI over routine 1-year follow-up was compared between groups.

Fluoroquinolones and second- or third-generation cephalosporins were the most commonly prescribed antibiotics in the treatment group. Incidence of symptomatic UTI during follow-up was 29.1% overall, with no significant difference between groups: 27% with antibiotics and 31% with no treatment. Per-protocol analysis of 87 patients in the antibiotic group and 92 in the no-treatment group showed similar results.

Secondary outcomes of pyelonephritis and kidney function were not significantly different between groups. On urine cultures performed 1 month after randomization, prevalence of ASB was 29% in the antibiotic group versus 66% in the no-treatment group. Throughout the follow-up year, antibiotic use was fivefold higher in the antibiotic group: 30 days per patient compared to 6 days per patient in the no-treatment group.

On continued screening, 78% of patients had at least one more episode of bacteriuria. Patients assigned to antibiotic treatment for initial ASB were more likely to have bacteriuria caused by bacteria resistant to clinically relevant antibiotics: 18% versus 4%.

Screening and treatment of ASB are often performed as part of routine surveillance after kidney transplantation. This practice can lead to increased antibiotic exposure, with the potential for selection of antibiotic-resistant bacteria. There are also questions as to whether ASB screening and treatment actually reduce the incidence of symptomatic UTI.

The BiRT study finds no significant reduction in symptomatic UTI with antibiotic treatment for screening-detected ASB more than 2 months after kidney transplantation. “By contrast, this strategy drastically increased antibiotic use and promoted the emergence of more resistant organisms in the urine,” the researchers write. They note that their study supports recent recommendations against systematic antibiotic use in kidney transplant recipients with ASB [Coussement J, et al. Antibiotics versus no therapy in kidney transplant recipients with asymptomatic bacteriuria (BiRT): A pragmatic, multicentre, randomized, controlled trial. Clin Microbiol Infect, published online ahead of print September 10, 2020, doi: 10.1016/j.cmi.2020.09.005; https://www.clinicalmicrobiologyandinfection.com/article/S1198-743X(20)30534-6/fulltext].