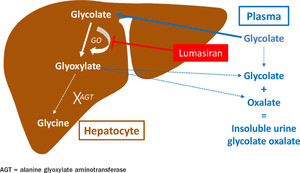 In November 2020, the US Food and Drug Administration (FDA) approved lumasiran (brand name “Oxlumo”), the first medical therapy specifically for the management of primary hyperoxaluria type 1 (PH1), a rare and life-threatening disease that often progresses to kidney failure. This announcement may represent a breakthrough, not only in the treatment of PH1 but also in drug development for a host of rare kidney diseases.

PH1 is caused by a congenital defect in the hepatic enzyme alanine glyoxylate aminotransferase, resulting in a failure to metabolize glyoxylate to glycine and the toxic accumulation of oxalate. The buildup of unmetabolized oxalate leads to its increased urinary excretion and crystallization. With time, this excess oxalate damages the kidneys, further impairing excretion and resulting in systemic oxalosis, with deposition in the bones and other organs. Severe kidney disease from PH1 can be insidious: 30% of patients present with kidney failure at the time of diagnosis, and many develop kidney failure by adolescence or young adulthood (1).

Heretofore, the management of PH1 has been largely supportive. For many individuals living with PH1, treatment has included copious fluid intake, often requiring the placement of a gastrostomy tube; early and frequent daily hemodialysis; and combined liver and kidney transplantation, sometimes requiring hemodialysis posttransplant as well. The median age to start dialysis is between 1 and 2 years, and even with these interventions, patient survival rate 5 years after the start of kidney replacement therapy is 76%, compared with 92% among children with kidney failure from other causes (2).

Now enters lumasiran, a small interfering RNA drug produced by Alnylam Pharmaceuticals, which promises to radically change our approach to managing PH1. The drug was developed as part of a unique collaboration between the Oxalosis and Hyperoxaluria Foundation and the Kidney Health Initiative (KHI), ASN’s public-private partnership with the FDA that aims to catalyze therapeutic innovations for people living with kidney diseases. With the use of RNA interference technology, lumasiran targets the messenger RNA for hydroxyacid oxidase 1 (HAO1) in the hepatocyte, which reduces levels of glycolate oxidase enzyme activity. Reduced glycolate oxidase enzyme activity means less substrate to catalyze the production of the toxic oxalate and thus less oxalosis overall (3) (Figure 1).

According to the FDA announcement, the top-line results of ILLUMINATE-A, the randomized multinational phase 3 study of lumasiran in participants 6 years of age and older, showed an average 65% reduction in 24-hour urinary oxalate excretion in the lumasiran cohort, compared with 12% in those who received placebo. In addition, one-half of patients in the lumasiran group achieved a normal 24-hour oxalate excretion level. No serious adverse events were reported, and among those treated with lumasiran, other adverse events were rare, including injection-site reactions like pain or redness and headache (4). In ILLUMINATE-B, the companion open-label multinational phase 3 study of lumasiran in children 5 years and younger, participants experienced a mean decrease in urinary oxalate of roughly 70% in the study’s first 6 months. The endpoints reported in both the ILLUMINATE-A and -B trials suggest the drug’s favorable impact on long-term PH1 sequelae, like kidney failure. This is welcome news to patients and families who had little therapeutic options prior to lumasiran’s approval (5).

Could this drug’s unique public-private industry-origin story signal a new trend in therapeutic developments for those living with relatively rare kidney diseases? Often, innovation to treat these diseases is stymied by financial impracticability. The FDA has worked to address this through rulemaking, and it awarded orphan drug and breakthrough therapy statuses to lumasiran, incentivizing the drug’s production in an environment where market-based pressures often prevent the development of such tailored treatments (5). Ultimately, the people power of public-private collaborations, like the one led by ASN’s KHI, which resulted in lumasiran’s development, may signal the way of the future, leveraging emerging technologies to bring targeted therapies to treat rare diseases.

The author reports no conflict of interest.