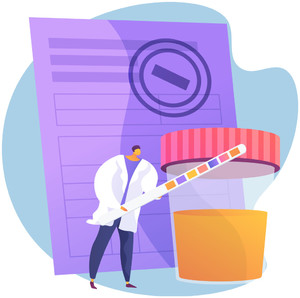 If there is a better test, why not use it?

That is the question a group of nephrologists are asking directors of their laboratories about diagnosing metabolic acidosis. They are advocating that measuring a patient's urine ammonium level is more helpful than trying to estimate it from the urine anion gap (UAG).

More than 170 nephrologists signed a public letter making this request to “directors of clinical laboratories,” first published on Twitter as the introductory step in a campaign to make urine ammonium tests more available.

The letter notes that the test would be valuable “not only in the diagnosis of renal tubular acidosis…but also in managing acidosis in progressive [chronic kidney disease] CKD…and in evaluating and treating patients with kidney stones, where it will give us clues about the acid load the patients consume.”

Although the test is available at some reference labs, many institutions do not even offer physicians the option to request to send out the test.

Many nephrologists realize that “the urine anion gap is not a good test,” said David S. Goldfarb, MD, clinical chief of nephrology at New York University Langone Health and one of the leaders of the ammonium test campaign. “We are hoping that nephrologists will read this [letter] and say, ‘Yeah, why are we satisfied with a urine anion gap measurement which is clearly not satisfactory?’ If we can demonstrate that nephrologists are interested in this test, then perhaps it won't be such a big deal for [laboratories] to perform it.”

The start of UAG

The use of the UAG as an indirect measure of ammonium rests on surprisingly flimsy ground, according to a recent review in JASN by Jaime Uribarri, MD, of the Icahn School of Medicine at Mount Sinai in New York City, and Man S. Oh, MD, of the State University of New York Downstate Health Sciences University in Brooklyn (1). Uribarri said the widespread use of the UAG grew out of “two papers in the 1980s [that] reported a strong inverse correlation between UAG and urine ammonium excretion in patients with metabolic acidosis. [The authors] postulated that the UAG could be used as an indirect measure of urine ammonium” (2, 3).

The influence of those papers continued “despite four other published studies that did not support that association. Urine ammonium excretion…has no consistent relationship to UAG either theoretically or in reality,” Uribarri said. “UAG ultimately depends on the intake of its three determinants—sodium, potassium, and chloride—without any a priori reason why this should correlate with urine ammonium.”

Uribarri and Oh said the authors of the original articles followed a flawed experimental process in which they induced metabolic acidosis by using oral loads of ammonium chloride, so it should have come as no surprise that ammonium secretion increased as UAG increased—thereby producing the inverse correlation as an artifact. “We concluded that there is no evidence that UAG is a good index of urine ammonium and therefore clinical laboratories should start measuring this parameter directly since it is not technically difficult,” Uribarri told Kidney News.

Uribarri said the comments he has received on the article have been entirely positive, with no one raising counter-arguments to question it.

Although there is no off-the-shelf test for urine ammonium, laboratories commonly offer plasma ammonia tests, which can be adapted. Lieske's laboratory adapted a plasma ammonia enzymatic kit that runs on a Roche analyzer.

“The concentration of ammonia in the urine is about 100 times more than it is in blood, and so it is really fairly straightforward. We checked with a couple of labs when we were looking into this. You just dilute the urine 1 to 100 and run it with the same reagents that you would run the blood test. It works just fine. Plasma ammonia is commonly measured and I would think it is available at most big centers because it is something that we follow in patients with liver disease.”

He said there is no large regulatory burden in adapting an off-the-shelf test for a different matrix or analyte, but there is more work in verifying and documenting the test's accuracy. Lieske said that if you don't use a test “exactly as the package insert says, there is an extra layer of validation you have to do. All labs have to verify that their methods work a couple of times a year through various surveys…where we compare answers with different laboratories. So, there are various ways that this would get verified that you are doing it correctly.”

Goldfarb said that “most major medical centers in the United States measure a plasma ammonia level,” so they already have the kits and reagents on hand to measure it in the urine as the Mayo Clinic does.

The question of volume

One hurdle to the implementation of a new test is the question of whether the expected volume will justify its expense. “Every test requires a certain amount of maintenance,” Lieske said. “If people are going to order this once a month, that is not really worth it. But if they were going to order a lot of these, I think the lab would be more receptive to doing it. So there is a certain chicken-and-egg thing that comes up with this sort of testing.”

The letter to laboratory directors addresses this issue head on: “One argument of the clinical labs is that the test may not be ordered in sufficient volume to justify them developing the required complex proficiency and validation tests. We believe the test is not being ordered, not because clinicians do not think it worthwhile, but because of its limited availability. If at least a number of clinical laboratories were available to perform the test as a ‘send-out,’ we all would order UNH4 [ammonium] with greater frequency.”

The campaigners are urging nephrologists to talk to the staff of their laboratories about offering the test and started by talking to their own laboratory people.

“The clinical laboratory asked me if I would be satisfied with the laboratory handling it as a send-out to Mayo Clinic, and I said, ‘sure enough,’” Uribarri added. “I am waiting now because they have to put it [into] the electronic medical records. It has to be in the system so you can click on it.”

Goldfarb agreed that “we’ll be happy for the send-out for now.” His laboratory director expressed interest in the proposal and contacted a major referral laboratory about its policy on the test. “That's positive for me” that the laboratory director was invested enough in his request to research it, Goldfarb said.

The Mayo Clinic Laboratories could handle the increase in volume if a number of institutions began offering the test as a send-out, Lieske explained.

Goldfarb said that NYU Langone Health's campaign is in its preliminary stages. He plans to ask nationwide laboratory networks like Quest and LabCorp to offer the test and perhaps contact laboratory organizations to enlist their help. “We are going to demonstrate that nephrologists care about this test,” he said. “It can be sent to a number of places that are actually doing the test, so it is not a big deal. It is not going to cost very much. The fact that it is not available is somewhat inexplicable.”