Reasons for the increased number of DCD donors in Canada 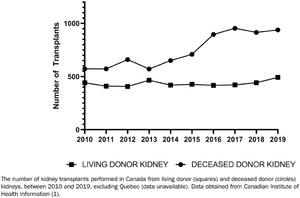 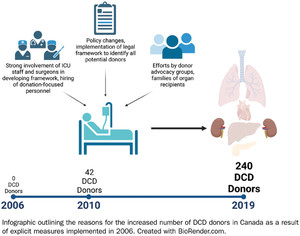 Kidney transplantation is the optimal treatment for end stage kidney disease. There are two types of kidney donors—living or deceased—and their proportions vary in different countries. This summary focuses on the living and deceased donation of all organs in Canada, which uses a voluntary opt-in system, where an individual who is eligible to become an organ donor may choose to opt-in to a national or provincial registry.

There is an interesting sex bias when it comes to the composition of living compared to deceased donors in Canada. Excluding Quebec (data unavailable), 62% of living donors in Canada were female, whereas a similar proportion of deceased donors (61%) were male. Furthermore, of the living organ donors, 57% were unrelated to the transplant recipient (2). Interestingly, although living donation has been stagnant since 2010 (3), at 16.3 donors per million population, Canada has one of the higher living donation rates compared to most other countries with available data (7). Overall, Canada's deceased donor transplantation has increased markedly, mostly due to increased DCD donors. Efforts directed at increasing awareness and living kidney donation are warranted globally.