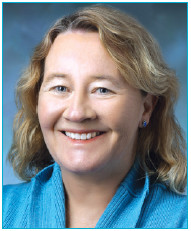 A scientist who shared a Nobel Prize for her key discoveries in chromosome replication will discuss the implications for kidney health in a state-of-the-art lecture on Sunday, November 7.

Carol W. Greider, PhD, will speak on “Telomeres and Telomerase in Health and Kidney Disease.” Dr. Greider is a distinguished professor of Molecular, Cell, and Developmental Biology at the University of California Santa Cruz, as well as a university professor at Johns Hopkins University.

Dr. Greider shared the 2009 Nobel Prize in Physiology or Medicine with Dr. Elizabeth Blackburn and Dr. Jack Szostak for their work on telomeres and telomerase. After Dr. Blackburn and Dr. Szostak discovered that telomeres—the caps at the ends of chromosomes—have a particular DNA that protects them from being broken down during replication, Dr. Greider extended this research while working on her PhD under Dr. Blackburn. In 1984, Dr. Greider discovered telomerase, an enzyme that maintains the telomeres.

In the absence of telomerase, telomeres shorten progressively as cells divide, and telomere function is lost. For this reason, telomerase is required for cells that undergo many rounds of divisions, especially tumor cells and some stem cells. The discovery catalyzed an explosion of scientific studies that probe connections of telomerase and telomeres with cancer, lung conditions, bone marrow conditions, and diseases of aging.

Dr. Greider has continued to pursue the implications of her discovery. After receiving her PhD in 1987 from the University of California Berkeley, she joined Cold Spring Harbor Laboratory as an independent fellow. While there, she cloned and characterized the RNA component of telomerase.

In 1990, Dr. Greider was appointed an assistant investigator at Cold Spring Harbor Laboratory and then investigator in 1994. She expanded the focus of her telomere research to include the role of telomere length in cellular senescence, cell death, and cancer.

In 1997, Dr. Greider moved her laboratory to the Department of Molecular Biology and Genetics at Johns Hopkins University School of Medicine. In 2003, she was appointed the Daniel Nathans Professor and Director of the Department of Molecular Biology and Genetics. Her group continued to study telomerase and determined the secondary structure of the human telomerase RNA. In addition, they characterized the loss of telomere function in mice, which allowed an understanding of short telomere syndromes in humans such as bone marrow failure, pulmonary fibrosis, and other diseases.

In 2020, Dr. Greider established her laboratory at the University of California Santa Cruz, where her research group studies fundamental mechanisms of telomere length regulation.

She has served on the Editorial Boards of seven journals as well as many National Institutes of Health Advisory Committees. In addition to the Nobel Prize, she has received the Lila Gruber Cancer Research Award, Wiley Prize in Biomedical Sciences, Albert Lasker Award for Basic Medical Research, Dickson Prize in Medicine, Louisa Gross Horwitz Prize, Katharine Berkan Judd Award, and more.