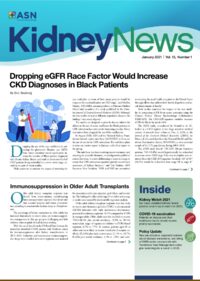 In a rush to complete regulatory activities before both the end of the year and the transition to an incoming Biden-Harris administration, the Centers for Medicare & Medicaid Services (CMS)—as well as other federal agencies—announced several administrative steps and final rules important to both nephrologists and other clinicians.

CMS announced that it is accepting the impact of COVID-19 as a condition for receiving an Extreme and Uncontrollable Circumstances exemption in the Merit-based Incentive Payment System (MIPS). MIPS is the largest quality payment program administered by CMS.

An Extreme and Uncontrollable Circumstances exemption would allow clinicians, groups, and virtual groups to submit an application requesting reweighting of one or more MIPS performance categories due to the current COVID-19 public health emergency. In the past, these exemptions were usually associated with natural disasters, for example, when reporting requirements have been interrupted by hurricanes or wildfires. In addition to extending this option to clinicians and practices significantly affected by COVID-19, the agency is extending the application deadline for 2020 to Monday, February 1, 2021, at 8 p.m. Eastern Time.

MIPS is one of two payment tracks in CMS’ Quality Payment Program (QPP) along with Advanced Alternative Payment Models. MIPS is a mandatory quality pay-for-performance program, except for clinicians excluded due to certain criteria such as low volume of Medicare patients, where clinicians report their performance on four categories of measures: Quality, Promoting Interoperability, Improvement Activities, and Cost. In 2018, there were a total of 7120 nephrologists who identified in MIPS, according to the American Medical Association Physician Masterfile (December 2017). Excluding nephrologists who did not report MIPS data in 2018 for various reasons, the participating number was 6117.

After a longer than average time period between closing the comment period on the proposed Medicare Physician Fee Schedule (MPFS) rule and issuing the final rule, CMS finalized the rule and now nephrologists will receive boosts in payments, especially in the rate for reimbursement for home dialysis, starting on January 1, 2021. The increases to nephrologists’ reimbursements were part of a multi-year push by ASN to increase the values incorporated in the reimbursement calculations.

This long-delayed rule reflects the current federal policy priority focused on increasing rates of home dialysis. The final rule includes an overall 6% increase in payments for nephrologist-provided services with an approximate 30% increase for home dialysis reimbursement. The increases were due to the upward adjustment of relative value units (RVUs) being applied to nephrology billing codes. CMS also increased the RVU value of the Transitional Care Management (TCM) codes.

“This is a big win for continuity of hospital-to-dialysis care for our patients. After years of advocacy by ASN, Medicare is supporting nephrologists with rates that better reflect our work and the value of home dialysis, a top priority for ASN,” said Anupam Agarwal, MD, FASN, ASN President.

While ASN was pleased to see the increases in home dialysis rates, there is still room for added valuations in order to achieve payment parity with in-center rates. The society will advocate for further increases when Medicare develops proposals for the CY 2022 Medicare Physician Fee Schedule (MPFS). There was also a code in pediatric nephrology that was not increased. ASN will work with the American Society of Pediatric Nephrology in the months ahead to address this issue before the next MPFS is proposed.