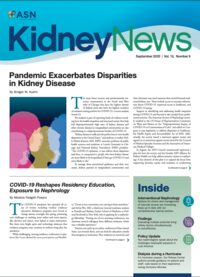 Nephrologists will see payment increases in some services starting January 1, 2021, according to the proposed rule on the annual physician fee schedule released last month by the Centers for Medicare & Medicaid Services (CMS). In general, nephrology will see an overall 6% increase with an approximately 30% increase for home dialysis services.

Anupam Agarwal, MD, FASN, ASN President, praised the move by CMS: “Finally, after years of advocacy by ASN, Medicare is supporting nephrologists with rates that better reflect our work. Most importantly, this is a big win for home dialysis, a top priority for ASN.”

CMS also proposed changes to the payment of transitional care management (TCM) and what codes can be billed with TCM services (Table 1). CMS added 14 End Stage Renal Disease (ESRD) codes to the list that may be billed with the TCM. TCM accounts for all the services by clinicians during the 30-day post-discharge period for patients discharged from hospitals. This includes the 7- or 14-day face-to-face visit. This visit does not have to meet a documentation level of service such as a 99214 or 99215 other than the medical decision-making component.

The increase in nephrology payments was due to the upward adjustment of relative value units (RVUs) being updated and applied to nephrology billing codes. However, the calculation of RVUs to adjust home dialysis rates became a source of great confusion at the time of the release of the proposed rule. The text of the proposed rule stated the RVU adjustment for CPT 90966 showed an increase from 4.26 to 8.04 RVUs—signaling an 89% increase for home dialysis rates. However, attached to the proposed rule was an Excel spreadsheet showing an increase to 5.52 RVUs for home dialysis establishing parity with two to three in-center MCP visits or a 31% reimbursement increase. This confusion led some in the kidney community to speculate that there had been a behind-the-scenes battle over “how much” to raise home dialysis reimbursement.

The kidney community had expected a set of recommendations regarding which telehealth waivers or expansions made under the public health emergency (PHE) owing to COVID-19 might be made permanent for those CMS has the authority to extend and and an indication of those the agency believes Congress will need to take action to extend. For the most part, this did not happen. Instead, CMS placed most ESRD-related service expansions in a newly created Category 3—the future of which is far from clear in the proposed rule. CMS invited comment on the fate of items in Category 3 as to whether commenters want the waivers/expansions to be made permanent. The American Society of Nephrology (ASN) is preparing comments on telehealth expansions and other nephrology-related changes under the PHE. Those comments are due to Medicare by October 5, 2020.

For the most part, the following are the telehealth changes to Medicare in the PHE:

Making these changes permanent requires action by either CMS or Congress depending on the change.

Medicare appears to be cautiously awaiting both congressional approval and healthcare stakeholder support.

As of 2019, and the release of the proposed physician fee schedule for calendar year 2020, CMS has included the Quality Payment Program (QPP) within the fee schedule rule. Previously, it had its own separate set of rule-making. The QPP, the value-based payment system that went into effect on January 1, 2017, has two payment pathways: Merit-based Incentive Payment System (MIPS) and Advanced Alternative Payment Models (AAPM). Not many major changes were proposed for calendar year 2021, and most of those included were prescribed by statute when Congress created the program in 2015. Here are a few proposed changes:

CMS also proposes implementing an APP ahead of schedule in 2021. Performance category weights under the APP would be: 50% for Quality, 30% for Promoting Interoperability, and 20% for Improvement Activities.

The APP would be:

Medicare is also proposing to make a one-year only adjustment for 2021 to increase the complex patient bonus from a 5- to 10-point maximum for clinicians, groups, virtual groups, and APM Entities for 2020 performance only to offset the additional complexity of the patient population due to COVID-19.