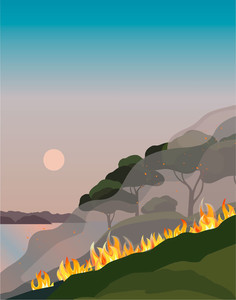 Individuals with kidney failure may face a higher risk of dying prematurely if they are exposed to air pollution from wildfires, according to new research published in the Journal of the American Society of Nephrology.

Large wildfires are occurring more frequently, and smoke generated from these fires contains high concentrations of fine particulate matter and other forms of pollution. When inhaled, fine particulate matter can travel into the respiratory tract and bloodstream and trigger oxidative stress and inflammation that may contribute to poor health, especially in sensitive populations including the elderly and individuals with chronic health conditions.

Studies have found that air pollution is one of various different environmental factors that can contribute to the development of kidney disease.

Because patients with kidney failure requiring dialysis are a fragile population, often with multiple illnesses such as hypertension and diabetes, investigators examined whether they are especially vulnerable to the health effects of wildfire smoke exposure.

For the study, the team assessed daily exposure of wildfire small particulate matter and mortality rates, both on the day of exposure and up to 30 days following exposure, drawing on information from 253 US counties near a major wildfire between 2008 and 2012.

“This study was possible because the US Renal Data System, a registry of patients with kidney failure, included vital records on almost all US patients receiving in-center hemodialysis, as well as the counties of the dialysis clinics,” said lead author Yuzhi Xi, MSPH, of the University of North Carolina at Chapel Hill. “Secondly, we utilized an air quality model to estimate daily exposure to wildfire fine particulate matter across the country at the counties of the dialysis units.”

Among the 268,399 US in-center hemodialysis patient deaths in the five-year period of 2008 to 2012, a total of 48,454 deaths were among patients who were receiving dialysis in the 253 counties. Each 10 µg/m3 increase in the concentration of wildfire fine particulate matter in the air was associated with a 4% higher death rate on the same day and a 7% higher rate over the next month. On days with wildfire fine particulate matter greater than 10 µg/m3, exposure to the pollution accounted for 8.4% of daily mortality, but this percentage varied from 3.0% to 20.5% across counties depending on the exposure level.

The investigators did not find a significant association with specific causes of death, including cardiac-, vascular-, or infection-related mortality, but they did observe a strong association with deaths related to “other” causes (listed as other, unknown, un-listed other, and missing), which accounted for over 40% of deaths.

“The findings highlight the impact of air pollution exposure in individuals receiving hemodialysis, and they support the need for more research to develop and implement interventions to manage exposure during wildfire smoke episodes in this population,” said senior author Ana Rappold, PhD, of the US Environmental Protection Agency.

Ziyad Al-Aly, MD, FASN, who is chief of research and education for the Department of Veterans Affairs Health Care System in St. Louis and was not involved with the study, noted that the findings lend support to results from previous research. “This paper is yet another piece of evidence that air pollution is an important driver of poor health outcomes, and the study’s link between exposure to wildfire smoke and death is alarming,” he said.

Al-Aly and his colleagues recently integrated all available epidemiological evidence to characterize an exposure–response model of ambient fine particulate matter and the risk of chronic kidney disease, uncovering an increase in risk with increasing air pollution concentrations. The authors of the BMJ Global Health study estimated that in 2017, there were 3,284,358 incident and 122,409,460 prevalent cases of chronic kidney disease in the world that were attributable to fine particulate matter, as well as 211,019 deaths due to chronic kidney disease from this form of air pollution. The burden varied by geography and was disproportionally borne by disadvantaged countries.

“Patients and clinicians should be cognizant that poor air quality, especially spikes in levels of fine particulate matter in the setting of wildfires, may be deleterious to human health and especially for our patients with end stage kidney disease on dialysis,” Al-Aly said. “The wider policy implications of this body of research are clear: poor air is hazardous to human health, and it tends to disproportionately affect the sick and the poor. Effort to halt climate change and improve air quality is important to the health and well-being of all of us, and especially the most vulnerable among us.”