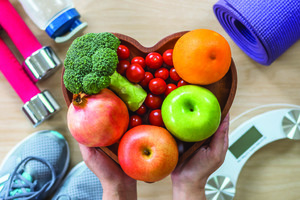 Diet and Lifestyle Are Key in Preventing and Managing Kidney Disease

As a chef and instructor at a culinary school Duane Sunwold knows a lot about food. But when he received a diagnosis of chronic kidney disease (CKD) in 2000, he discovered he still had a lot to learn.

During the first 2 years after his diagnosis, Sunwold gained 60 pounds because of the medications he was taking, and his creatinine level reached 4.9 mg/dL, just shy of the requirement for dialysis. He tried three different nephrologists. Finally, his current doctor recommended that he try a plant-based diet. It wasn’t easy, but within 2 weeks, he began to feel better. And that helped him stick with it.

“Today, I’m in complete remission and have been there for about 10 years,” said Sunwold, who is a department chair at the Inland Northwest Culinary Academy.

Sunwold said he is living proof that diet and lifestyle can play a role in helping to manage CKD. The plant-based diet is just one of several diet and lifestyle interventions that may help patients with CKD or diabetic kidney disease (DKD) and individuals at risk for the development of those conditions, according to experts. Increasing exercise is also highly recommended. But some other approaches to lifestyle change, such as a low-carbohydrate diet or a low-protein diet, are still hotly debated.

Sunwold chose to adopt a plant-based diet, replacing proteins from animal products with plant-based proteins, but there was a substantial learning curve to ensure he was getting all the amino acids his body needed. He said he had to learn about where he could get complete plant-based proteins, such as quinoa, chia, or hemp seed, and to pair legumes and grains together.

“Even as a professional chef I needed to know what plants I should be eating, and I needed some education on plant-based proteins,” he said. “I was amazed at how little I knew going into this.”

Kam Kalantar-Zadeh, MD, MPH, PhD, professor of medicine and chief of nephrology at the University of California—Irvine School of Medicine, recommends that kidney disease patients try to get 50% or more of their protein from plants. How much protein patients eat is also important because too much protein can put a strain on the kidneys, he emphasized. The typical American diet is high in total protein and animal-based protein, he noted: on average, 1.2 to 1.4 grams per kilogram body weight per day compared with the 0.8 grams per kilogram currently recommended for healthy people. Kalantar-Zadeh recommended that those at risk for kidney disease should avoid high-protein diets involving more than 1 gram per kilogram per day and that those with kidney disease adopt lower-protein diets in the range of 0.6 to 0.8 gram per kilogram per day.

“We need to avoid high-protein diets so that we can avoid overusing and abusing the remainder of kidney function,” he said.

But there is some debate about the benefits of a low-protein diet. Srinivasan Beddhu, MD, professor of internal medicine at the University of Utah School of Medicine, explained that some studies testing very-low-protein diets (0.3–0.4 grams/kilogram per day) haven’t shown a benefit in terms of kidney function, but there was some evidence of harm in long-term follow-up. Beddhu noted some of his colleagues are very excited about low-protein diets, but he urged caution. Instead, he recommends a moderate-protein diet of no more than 0.8 gram per day for patients.

“A very-high-protein diet should be avoided in people with CKD,” he said.

In terms of diets, Beddhu suggested that the Mediterranean diet or the Dietary Approaches to Stop Hypertension (DASH) diet, the latter of which emphasizes low sodium intake to reduce hypertension, are probably the best choices for patients with DKD.

“The evidence is inconclusive, because there have been no randomized controlled trials,” Mitchell said. She explained that there have been numerous studies of low-carbohydrate diets but that patients with CKD or DKD have been excluded. She said clinical trials of low-carbohydrate diets in patients with DKD and CKD are needed that carefully track what they eat, their weight, and their kidney function.

“Treating obesity is so difficult,” she said. “We need to have a bunch of things that we can offer. Not being able to offer people with CKD or DKD a low-carb diet because of what we think might happen is not really an option.”

Kalantar-Zadeh, who has criticized low-carbohydrate diets because of their potential to harm the kidney, acknowledged that it can be hard to argue with patients with diabetes or obesity who have seen substantial weight loss on low-carbohydrate diets. He suggested that perhaps such diets could be used for a shorter duration, with close supervision of kidney function.

“The ultimate compromise would be that if someone has DKD, we can use high-protein diets in short-term phases with supervised and tailored plans to lose weight,” he said. In the longer term, he suggested that it is wise to increase carbohydrate levels after the patient’s weight loss goals have been met.

Increased activity can be a helpful lifestyle change for patients with kidney disease or those at risk. Many patients with CKD or diabetes have poor muscle tone and function, in part because of their condition, noted Beddhu. They may also struggle with fatigue. Both of these conditions can make starting an exercise regimen difficult.

“If we ask our patients to walk a couple of miles a day, they’re going to find it difficult because of those issues,” he said. “We need to address the underlying problem—the muscle dysfunction—before we can improve physical activity.”

Beddhu suggests that patients start with muscle-strengthening activities and try to do them at least 5 to 10 minutes a day. That doesn’t require expensive equipment; individuals can just use elastic bands and ankle weights, he said. This can help them build up the strength they need for other types of physical activities. He said it is also important to decrease sedentary activities and to be as active as possible, which has been shown to reduce the risk of mortality in both CKD patients and the general population.

“They should choose a routine, whatever best fits their lifestyle that they enjoy doing,” he said. Sunwold said he has made swimming a part of his routine.

Sunwold acknowledged that making lasting dietary and exercise changes is hard. He noted that he still occasionally eats meat and will have a few bites of things he really enjoys, but that envisioning his “kidneys on crutches” helps him to stick with his diet and exercise routine. “I give myself a 30-second pity party,” Sunwold said. “But after 30 seconds, the pity party has got to stop. We’ve got to move on.”

Beddhu said the work Sunwold is doing to educate other patients is great. And he encourages physicians to educate their patients about beneficial lifestyle and dietary changes as well, even though not everyone may be able to make lasting changes.

“With lifestyle, I understand that not everybody will be successful,” Beddhu said. “It’s like asking people to stop smoking: if only 10% or 20% eventually do, that’s still a significant number, and that can still impact outcomes for those people.”

The most important thing, Kalantar-Zadeh said, is to customize lifestyle and diet to fit an individual patient’s needs and preferences. This includes taking into account their condition, preferences, and goals.

“No one size fits all,” he said. “We can’t do that any more; it has to be a highly patient-centered approach.”