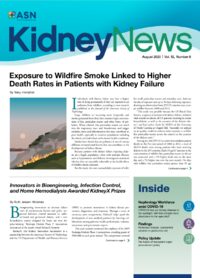 Bayer announced that results of the phase 3 FIDELIO-DKD study of the drug finerenone met its primary endpoint of delaying progression of chronic kidney disease (CKD) in type 2 diabetes patients. CKD progression was delayed through reduction of the combined risk of time to first occurrence of kidney failure, a sustained decrease of estimated glomerular filtration rate (eGFR) greater than or equal to 40% from baseline over a period of at least four weeks, or renal death.

The drug is the first investigational non-steroidal, selective mineralocorticoid receptor antagonist that demonstrates risk reduction in kidney and cardiovascular events, according to Bayer, a worldwide pharmaceutical company based in Leverkusen, Germany, with Bayer US located in Whippany, NJ.

FIDELIO-DKD is a randomized, double-blind, placebo-controlled, parallel-group, multicenter phase 3 study and includes 5700 patients from more than 1000 sites across 48 countries. Patients were randomized to receive either finerenone 10 mg or 20 mg orally once daily or placebo when added to standard of care, which included blood glucose–lowering therapies and maximum tolerated dose of renin–angiotensin system (RAS)-blocking therapy.

Second, AstraZeneca’s dapagliflozin (brand name Farxiga, Cambridge, UK) is again showing usefulness for CKD patients with type 2 diabetes. As the company awaits an FDA decision on its application to use the drug as a treatment for patients who have CKD but not diabetes, the firm announced that the drug could reduce the proportion of patients with declining eGFR. The DECLARE-TIMI 58 trial showed that among patients taking dapagliflozin—both type 2 diabetes patients and those with an established or increased risk of cardiovascular disease—eGFR levels declined rapidly in 26.8% versus 37.1% of patients taking a placebo, according to MDMag.com