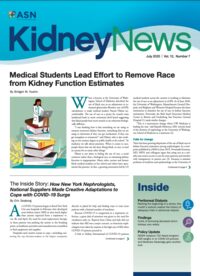 The average cost of procuring a deceased-donor kidney is $36,000, but the cost varies substantially between different organ procurement organizations (OPOs), concludes a study in the American Journal of Transplantation.

The researchers analyzed annual cost reports from 51 of 58 OPOs in the United States from 2013 to 2017. Data analysis focused on variations in kidney procurement costs, including differences in costs by OPO size, based on annual number of kidneys procured. The analysis also considered costs associated with acquisition of viable (transplanted) versus nonviable (discarded) kidneys and other OPO outcomes.

Although previous studies have examined the costs of the organ transplantation process, less is known about the costs of organ acquisition. The new study documents a significant variation in kidney procurement costs among OPOs.

Procurement costs are affected by the percentage of viable versus nonviable kidneys, OPO size, and a range of other factors. The researchers discuss the implications for addressing possible inefficiencies in the current OPO structure [Held PJ, et al. The cost of procuring deceased donor kidneys: Evidence from OPO cost reports 2013–2017. Am J Transplant 2020; 20:1087–1094].