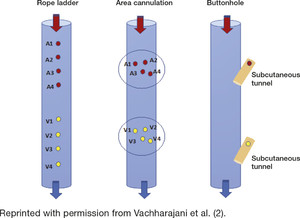 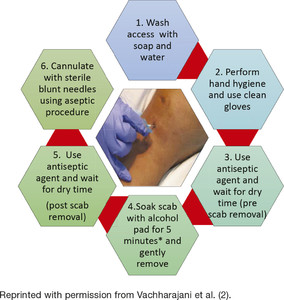 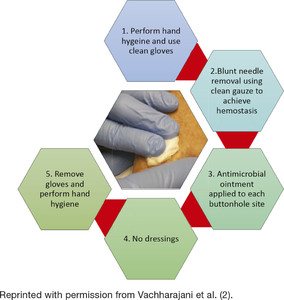 The two alternative AVF cannulation techniques are the “rope-ladder” (RL) technique, which involves using a different site to place two sharp needles during consecutive HD sessions, and the “area” or “cluster” technique, in which sharp needles are placed in the same general area (Figure 1) (2). All three techniques have been used for AVF cannulation in both the in-center and home HD settings. In comparison with standard cannulation (SC) techniques, BH cannulation requires weeks of development of both tracts, the use of blunt needles once fibrous tunnels are formed, special training for cannulators, and additional time required for and attention to important steps for disinfection before and after the scab is soaked for gentle removal before cannulation, and application of mupirocin ointment after decannulation (2–4). The buttonhole technique was first introduced for the cannulation of AVFs with short segments, and initial series reported less pain and fewer infiltrations or hematomas because the blunt needles caused less trauma (5, 6).

When the buttonhole AVF cannulation technique is used, it is critical that strict aseptic technique is followed and that a topical antibiotic, preferably mupirocin, be used after decannulation.

International data from Canada, Australia, Denmark, and Belgium report a significantly higher infection rate with use of the BH technique. In a randomized controlled trial comparing BH with SC in 140 in-center HD patients in Alberta, Canada, who were followed up over a long term, there were 12 infections in the BH group, including nine episodes of Staphylococcus aureus bacteremia, whereas there were zero infections in the SC group (incidence rate ratio 63.29; 95% confidence interval 22.2–180; p < 0.001) (3). Although fewer patients who underwent BH needling experienced a hematoma, there was no difference in pain, AVF thrombosis, interventions, or survival (7, 8).

In a retrospective review of BH cannulation in 90 home HD patients at an Australian center, the total infection rate was nearly fourfold higher in patients using BH needling than in those using the RL technique (9). A quality improvement initiative, introduced for patients using BH needling at an in-center HD facility in Belgium, reported a reduction in the incidence of total infectious events (from 0.43 to 0.34 per 1000 AVF days); however, the incidence was still twofold higher with BH than with RL (0.34 vs. 0.17 per 1000 AVF days; p = 0.003) (3). In that study, the BH technique was associated with a significantly higher incidence of Staphylococcus aureus and S. epidermidis bacteremia, metastatic infections, and deaths. Similarly, a single-center study from Ontario, Canada, reported significantly higher rates of S. aureus bacteremia with metastatic complications in a home HD patient population using BH cannulation. After the introduction of topical mupirocin, the rate of S. aureus bacteremia improved significantly (0.23 vs. 0.03 per 1000 AVF days). The risk for the development of S. aureus bacteremia in the observation period, before the introduction of a topical mupirocin protocol, was sixfold higher than in the period after routine use of mupirocin prophylaxis (odds ratio 6.4; 95% confidence interval 1.3–32.3; p = 0.02) (4).

There was great interest in the safety of the BH technique for AVF cannulation in a recent online conversation on the Nephrologists Transforming Dialysis Safety (NTDS) ASN Communities website. The ASN Communities post was initiated by Valerie Luyckx, MBBCh, from Brigham and Women’s Hospital in Boston, Massachusetts, who raised a concern that patients using the buttonhole technique might become “transiently bacteremic more commonly than we may realize” and identified the need for a prospective study. The responses and opinions have been quite extreme and range from “buttonhole cannulation should be abandoned” to “buttonhole should not be taken off the table for home HD patients.” Peggy Bushey, RN, from the home hemodialysis program at the University of Vermont Medical Center, shared a successful antiseptic protocol for buttonhole cannulation in home HD patients where cannulators are limited to one skilled person: the patient or the caregiver. Unfortunately, the buttonhole technique was terminated in the in-center HD setting at this facility because of an increase in infections. Potential reasons given for this finding were the use of multiple AVF cannulators with varied skill levels and the time demands in a busy in-center HD facility.

In a recent Kidney360 article, the United States experience with buttonhole AVF cannulation was reviewed by Tushar Vachharajani, MD, and colleagues from the NTDS Vascular Access Workgroup (2). The BH data for the HD patient population in the United States are not as robust as the international data (Table 1) (10–13). Most of the available data from the United States on this topic are derived from small single-center cohorts. The follow-up periods are relatively short, and the outcomes not well defined according to standard criteria.

A single-center study from New York, which included both in-center and home HD patients, reported the experience before and after the introduction of a quality improvement initiative for BH cannulation. Although the quality improvement initiative was associated with a reduction in BH-associated vascular access infections from 50% to 30%, the BH infection risk was still substantially greater than that associated with the RL technique at 8% (12). The largest BH study in the United States was performed by Lyman et al. (15) This was a retrospective observational analysis using data from the National Healthcare Safety Network (NHSN) surveillance report from 2013 to 2014. In 2014, 9% (n = 271,980) of all AVF patient-months reported to NHSN were among BH patients. After adjustment for facility characteristics and practices, BH cannulation was associated with a 2.5-fold higher risk of an access-related bloodstream infection and a 1.5-fold greater risk of a local access site infection in comparison with SC.

The most recent vascular access guidelines from the National Kidney Foundation Kidney Disease Outcome Quality Initiative recommend that BH cannulation be limited to special circumstances, given the associated increased risks of infection and related adverse consequences (16). The guidelines were presented at the spring clinical meetings in May 2019. In my opinion, this recommendation is appropriately prudent. When the BH AVF cannulation technique is used, it is critical that strict aseptic technique is followed and that a topical antibiotic, preferably mupirocin, be used after decannulation. The Kidney360 review by Vachharajani et al. (2) provides evidence-based protocols for BH cannulation (Figures 2 and 3).