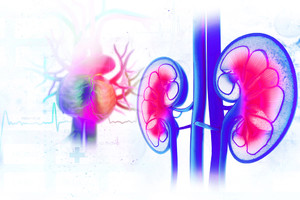 Transcatheter mitral valve repair (TMVR) is a minimally invasive procedure used as a treatment option for patients with symptomatic chronic moderate to severe, or severe mitral regurgitation (MR). The MitraClip is an edge-to-edge leaflet repair device and is currently the only device approved by the U.S. Food and Drug Administration for TMVR. MR is one of the most common valve lesions. Patients with chronic kidney disease (CKD) and MR usually have multiple comorbidities, increasing their surgical risk for valve replacement and making them possible candidates for TMVR by use of the MitraClip. The interaction between MR and the kidney is complex: MR can lead to abnormalities in hemodynamics and congestive heart failure, which may lead to or worsen CKD. Repair of the mitral valve may therefore be expected to have a favorable impact on kidney function in some patients. Conversely, kidney function plays an important role in cardiovascular disease, and it is well known that the outcomes of many procedures such as transcatheter aortic valve replacement (TAVR) are worse in patients with CKD than in the general population. Here we review the use of MitraClip and its application in patients with kidney disease.

Given the interrelationships between the heart and kidneys, it is plausible that repair of the mitral valve, including repair performed by the transcatheter approach, might have a favorable impact on kidney function in some patients in whom a component of the kidney disease is a consequence of decreased effective arterial volume.

As with transcatheter aortic valve replacement (TAVR), an important question about TMVR with the MitraClip is whether CKD has an impact on mortality. An unadjusted analysis done in the same study (1) indeed showed that the 1-year survival rate was associated with baseline kidney function. The mortality rate at 1 year was 15.0% for the overall cohort. When stratified by stage of CKD, mortality rates were found to be 9.0%, 20.6%, and 26.0% among patients with CKD stage 1 or 2, stage 3, and stage 4 or 5, respectively (p < 0.001).

Another multicenter study demonstrated an association between CKD and worse outcomes. That study used a multicenter registry of 173 patients treated with MitraClip between 2009 and 2012 at three centers (4). The patients were divided into three groups: advanced CKD (creatinine clearance [CrCl] <30 mL/min, group 1, n = 20), moderate CKD (CrCl 30–60 mL/min, group 2, n = 78) and normal kidney function (CrCl >60 mL/min, group 3, n = 75). Only 1 patient in group 1 was using dialysis. Patients with advanced CKD were significantly older and had higher values on the logistic EuroSCORE. There was no significant difference in the procedural success rate among the three groups. Data for all-cause mortality (16.2%) and readmissions due to heart failure (10%) with a mean follow-up time of 16.2 ± 11.1 months were available in 130 patients (17 patients in group 1, 61 patients in group 2, and 52 patients in group 3). Mortality rates differed significantly between the groups (52.9% for group 1, 8.2% in group 2, and 13.5% in group 3, p < 0.001). With regard to a combined endpoint of death or readmission due to heart failure, a significant difference between the groups was noted, with advanced CKD (group 1) being identified as an independent predictor of the combined event (hazard ratio 4.8, 95% confidence interval 1.1–21.3, p = 0.04).

An additional study showed that CKD is associated with worse outcomes in patients undergoing TMVR with MitraClip (6). In that study, 212 consecutive patients who underwent TMVR with MitraClip were enrolled and were divided into three groups. The groups had normal eGFR (60 mL/min per m2 ≤eGFR in 70 patients (34%), mild CKD (30 mL/min per m2 ≤eGFR <60 mL per min/m2 in 106 patients (51%), and severe CKD (eGFR <30 mL/min per m2 in 30 patients (15%). The median follow-up period was 475 ± 425 days. Patients in the CKD groups were older, had higher logistic EuroSCOREs, and higher N-terminal pro B-type natriuretic peptide levels than did those in the normal eGFR group. Univariate Cox regression analysis showed that severe CKD was associated with an increased risk for all-cause death (p = 0.002, hazard ratio 3.423), and multivariable Cox regression analysis also revealed an association between severe CKD and all-cause death (p = 0.001, hazard ratio 4.322).

Whereas the outcomes after MitraClip are worsened by the presence of CKD, an important question is how such patients would fare without the procedure being performed. Although direct comparisons are not available for patients with CKD who receive MitraClip compared with no procedural intervention, several inferences can perhaps be drawn. In the general population, the annual mortality rate for medically treated patients with primary severe MR is up to 6%, and intervention by mitral valve replacement or repair is well known to be associated with an improved survival rate and reduced symptoms (8). Patients with MR and CKD appear to have far worse survival rates than do those without CKD, as evidenced in one study in which the 5‐year survival rate of patients with severe MR and CKD was 37%, compared with 65% for severe MR without CKD (9). Hence, although outcomes with MitraClip in patients with CKD are less favorable than in those without CKD, it seems likely that this is outweighed by a reduction in the mortality rate that would be found in the absence of such intervention.

In a manner similar to what has been observed with TAVR, CKD is associated with worse outcomes in patients undergoing MitraClip placement, including higher mortality rates compared with non-CKD patients. Among the benefits of MitraClip, some patients with CKD experience an improvement in their kidney function after MitraClip placement, likely as a result of improved effective arterial volume. Our growing understanding of these relationships can help us best select the patients who can benefit significantly from this procedure.