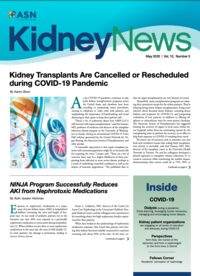 A video played at Alabama Department of Motorized Vehicles (DMV) facilities—specifically targeting African Americans—resulted in a modest but significant increase in organ donor registrations, reports a study in Transplantation.

The 10-minute video was created by a professional film company experienced in producing motivational “call to action” videos. The video built on previous research with African American DMV patrons and was developed with input from members of the community. Topics included medical mistrust, the need for donor organs, and stories shared by organ donor and recipient families. The video also featured brief promotional clips by well-known local figures, such as elected officials and football coaches.

In an interrupted time series design, the video was played in six DMV facilities, in cycles of 2 months on and 2 months off over 1 year. Evaluation included assessment of the video’s impact on organ donor registration rates.

The analysis included nearly 163,000 patron visits during the 12-month study period; about 55% of patrons were Caucasian and 40% African American. Overall donor registrations increased by an average of 2.3% during times the video was on. Rates were 51.1% with the video on versus 48.4% with the video off; increases varied by site, from 1.98% to 3.35%.

On multivariable analysis, the video-on condition was significantly associated with donor registration: odds ratio (OR) 1.09. Other independent factors included female sex (OR 1.29), Caucasian race (OR 4.48), and younger age (OR 0.982 per year). Even though the video was tailored to African Americans, there was no evidence of an incremental effect in this group. In exit interviews with African American patrons, only 16% said they watched the video and could identify its main message.