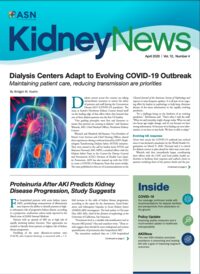 For patients with CKD stage 3, the standard practice of prehydration before contrast administration does not reduce the risk of AKI, reports a randomized trial in JAMA Internal Medicine.

The “Kompas” trial included 523 patients with stage 3 CKD undergoing nonemergency contrast-enhanced computed tomography (CECT) at six hospitals in the Netherlands. The patients were 336 men and 187 women, median age 74 years. They were assigned to undergo prehydration or no prehydration before contrast administration. Prehydration consisted of 1-hour infusion of 250 mL of 1.4% sodium bicarbonate.

The two groups were compared for their mean relative increase in serum creatinine 2 to 5 days after CECT, compared to baseline; the noninferiority margin was less than a 10% increase. Secondary outcomes included AKI developing 2 to 5 days after contrast administration, mean relative increase in creatinine at 7 to 14 days, incidence of acute heart failure or renal failure requiring dialysis, and healthcare costs.

There was no difference in the effects of prehydration versus no prehydration in specified patient subgroups. The cost of prehydration (mean €119) was avoided in the comparison group; other costs were not significantly different.

For more than a decade, prehydration protocols have been widely used with the goal of preventing postcontrast AKI in patients with CKD stage 3. This is despite the lack of evidence on the effectiveness of this intervention, as well as the potential for adverse effects such as volume overload.

The Kompas randomized trial finds no difference in the relative increase in serum creatinine for stage 3 CKD patients receiving prehydration versus no prehydration before CECT. Other outcomes are also similar between groups, including healthcare costs. “[O]ur study provides sufficient evidence that preventive hydration can be withheld in this population,” the researchers conclude [Timal RT, et al. Effect of no prehydration vs sodium bicarbonate prehydration prior to contrast-enhanced computed tomography in the prevention of postcontrast acute kidney injury in adults with chronic kidney disease: the Kompas randomized clinical trial. JAMA Intern Med 2020; DOI: 10.1001/jamainternmed.2019].