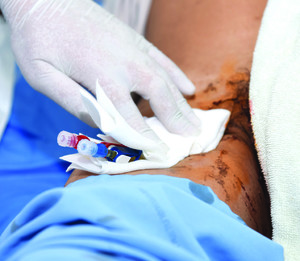 Does Fistula Creation for Dialysis Access Have its Own Benefits?

Because patients often resist surgery to create recommended arteriovenous fistulas for dialysis, some researchers have hoped to find advantages

An arteriovenous fistula (AVF) is the guideline-recommended vascular access for hemodialysis, yet a large majority of patients in the US and Canada begin dialysis using catheter access, despite its higher rates of complications. Because patients resist having the AVF surgical procedure, many nephrologists have looked to the results of observational studies that led to the hypothesis that AVF creation could affect kidney function—and even lead to benefits that could postpone the need for dialysis.

Definitive evidence for such a benefit remains elusive, however, with two new studies contributing to the discussion in conflicting ways, and providing no firm answers. A study from Canada provided more observational evidence that the creation of an AVF slows a patient’s slide toward dialysis, whereas one from Sweden found the same benefits from the placement of either an AVF or a peritoneal dialysis catheter.

The first report, published in November 2019 in BMC Nephrology by Annie-Claire Nadeau-Fredette, MD, et al., was a retrospective cohort study of 146 patients in Quebec whose estimated glomerular filtration rates (eGFR) were followed pre- and post-AVF creation. The study found that “AVF creation was associated with a significant reduction in eGFR decline.” The results echo the findings of several other observational studies.

But a somewhat contrasting study from the Karolinska Institute in Sweden, published in October 2019 in Nephrology Dialysis Transplantation by Ulrika Hahn Lundstrom et al., compared the effects of AVF placement with peritoneal dialysis catheter placement in 744 pre-dialysis patients. The study found that “both forms of access were associated with reduced eGFR decline [with] no significant difference in eGFR decline” between the two procedures.

Two broad categories of explanations have been proposed for how AVF placement could contribute to flattened eGFR decline: first, by contributing to physiological changes that benefit kidney function, and second, through ancillary improvements in care or patient actions.

Several physiological reasons—or at least possibilities—have been proposed for how AVF placement could be associated with the flattening of decline in kidney function, according to Nadeau-Fredette, of the Hopital Maisonneuve-Rosemont, Montreal, Quebec, Canada, and lead author of the AVF study.

But they also note that “it is possible that the observed effect of AVF on eGFR was mediated by improved compliance to drug and medical follow-up or natural stabilization of the kidney disease.”

Patient compliance and other effects

The study from the Karolinska Institute calls into question the impact of a physiological reason for stabilization of eGFR because the results were the same for the AVF and peritoneal dialysis catheter groups, but rather appears to bolster a “process of care” and compliance explanation, according to Prabir Roy-Chaudhury, MD, of the University of North Carolina Kidney Center in Chapel Hill.

Because patients resist having the AVF surgical procedure, many nephrologists have looked to the results of observational studies that led to the hypothesis that AVF creation could affect kidney function—and even lead to benefits that could postpone the need for dialysis.

Roy-Chaudhury notes that as their disease progresses, patients will have more interactions with their healthcare providers. Patients resist the idea of going on dialysis, and don’t want to give in to their situation, but faced with the grim reality of having a procedure, their compliance might increase: “When the patient asks, ‘Is there any chance that I can prolong the time to dialysis even with the fistula placed?’ The physician is going to say, ‘Do all the things that you were doing before,’ which the patient may not have been doing. So now suddenly the patient starts doing all of those important things they have been neglecting, like taking their medicine, controlling their blood pressure, coming to appointments, and listening to the nurse.”

Similarly, the patient receives stepped-up care and closer attention from providers when preparing to have a procedure, which could also have beneficial effects on the patient’s condition. “It could be a result of the process of care, . . . which is important because it means that one way of reducing the decline of GFR is to enhance the process of care,” Roy-Chaudhury said.

Another confounding factor could be that the reasons and timing of preparing for dialysis play into a statistical phenomenon known as regression to the mean related. “The accelerated decline in kidney function leads to the decision to begin dialysis and implant a fistula, but such declines tend not to be linear. The decline tends not to occur at a consistent rate, but flattens out over time—regresses to the mean rate of decline,” Roy-Chaudhury told Kidney News.

Csaba P. Kovesdy, MD, of the University of Tennessee Health Science Center in Memphis, said there are now three or four observational studies that show an association of AVF placement with the benefit of a flatter trajectory of eGFR decline. The Swedish study shows no difference between AVF and catheters, but is like the Canadian study in that both “show a benefit from intervention,” Kovesdy said.

Kovesdy and colleagues published the largest study to date of the potential AVF effect in Nephology Dialysis Transplantation in 2017. They compared more than 3000 patients with chronic kidney disease who had a pre-dialysis AVF or arteriovenous graft (AVG) with a 3500-patient comparator cohort who started dialysis with a central venous catheter. They found a deceleration of eGFR decline in the AVF/AVG group, compared with an acceleration of eGFR decline in the catheter group.

The benefit in the AVF/AVG group occurred independent of the AVF/AVG maturation, however, which led the researchers to “consider the possibility that the deceleration of eGFR decline … may be attributable to factors unrelated to the physiological effects of a mature vascular access, such as more attentive nephrologist care and improved patient health status or behavioral compliance with therapy. Nonetheless, there still seem to be other plausible physiological mechanisms that could explain the potential renoprotective effects of AVF/AVG creation even in those patients whose vascular access is not mature enough for successful hemodialysis cannulation.”

These findings did not support that these physiological mechanisms were related to cardiac improvements, but the researchers noted the “growing evidence from experimental and clinical studies” of benefits from RIPC. The process of AVF surgery involves “repetitive clamping of the feeding artery and permanent ligation of small arterial branches. It has been postulated that even a brief ischemic stimulus of a remote site releases RIPC-induced humoral factors such as adenosine, erythropoietin, or nitric oxide into the systemic circulation, which subsequently protects other target organs, including the kidney,” the researchers wrote.

This local limb ischemia would occur in all patients who underwent an AVF procedure, so the potential benefit would apply regardless of whether the fistula matured.

Kovesdy bemoaned the “inertia or lack of trust” encountered when trying to convince a patient it is time to place an AVF to prepare for dialysis, and sees the advantage of having another reason to encourage a patient to proceed. But, “this is observational data, so the level of evidence is not high enough to imply causality at this point. And there are several aspects of this data which suggest that it may indeed be some kind of an unmeasured confounder” leading to the benefit, he said.

Nadeau-Fredette said that she would like to see more patients using AVFs because “it is the best access,” and a link to another benefit might help convince them—but the evidence of cause and effect is not there. “This is only observational, so I cannot say that it is directly related. There are some hemodynamic reasons that could be involved, but it is very difficult to know if it is really the cause or just kind of an observation,” she said.

There is one point on which everyone agrees: More direct evidence on the level that randomized clinical trials could provide would be a tremendous help. But it would be ethically difficult to design a clinical trial in which a tranche of patients were denied the recognized standard of care of AVF placement.