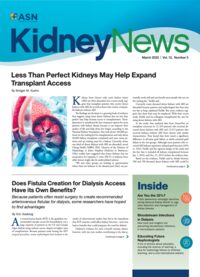 A nationwide public awareness campaign to promote early detection, treatment, and management of kidney disease is launching in March 2020 in conjunction with National Kidney Month.

The campaign, called “Are You the 33%?” aims to engage every adult to learn more about their risk for kidney disease by taking a simple, one-minute online quiz at MinuteforYourKidneys.org.

One in three adults in the United States is at risk for kidney disease.

“Look around the next time you’re sitting in a school auditorium or even in a giant professional sports stadium; one-third of every adult in there with you is at risk of developing kidney disease,” said Kevin Longino, CEO of the National Kidney Foundation (NKF) and recipient of a kidney transplant.

Launched by NKF, the campaign is among the first steps in a collaborative partnership among the Department of Health and Human Services (HHS), NKF, and ASN to raise awareness about kidney disease and improve patient outcomes. The Public Awareness Initiative was outlined in the Executive Order on Advancing American Kidney Health, the historic action to transform kidney health signed by President Donald J. Trump in July 2019.

The National Kidney Foundation has entered into strategic alliances with CVS Kidney Care, Healthy.io and Laboratory Corporation of America in order to carry out the campaign with Otsuka America Pharmaceutical, Inc. serving as a Campaign Sponsor.

In its partnership with HHS and NKF, ASN will fulfill the Public Awareness Initiative outlined in the Executive Order by educating clinical professionals and spurring innovations by entities serving the kidney community. Officially launching in fall 2020, ASN’s campaign will target and inform kidney care professionals about how to succeed in a future where the practice of nephrology includes more home-based therapies and transplantations. In addition, ASN will build off its efforts in 2019 and continue to engage capital markets to dispel myths, encourage prioritizing the kidney space for investment, and advocate that nephrology is open for business.

The public awareness “Are you the 33%?” campaign will include “compelling visuals, a thought-provoking social media campaign, and a broadcast PSA launching later this month with television and film star Wilmer Valderrama, [and will focus] on the 33% of American adults at risk for developing dangerous, life-threatening kidney disease,” according to a press release issued by NKF. “Risk factors include diabetes, heart disease, high blood pressure, obesity and family history of kidney disease.”

The campaign microsite will be available in Spanish starting in September 2020.

“More than 90% of the 37,000,000 Americans and 850,000,000 individuals worldwide affected with kidney disease are unaware that they are even sick,” said Anupam Agarwal, MD, FASN, ASN President. “This silent epidemic often strikes without symptoms. Millions of people won’t know they have kidney disease until their kidneys stop working and it’s too late.”