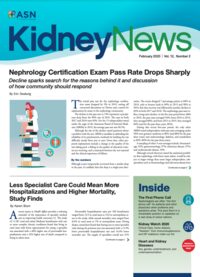 A recent report in Health Affairs provides a sobering reminder of the importance of specialty medical care in improving health outcomes (1). The study of 11,581 rural and urban Medicare beneficiaries with one or more complex chronic conditions found that living in rural areas with fewer opportunities for seeing a specialist was associated with a 40% higher rate of preventable hospitalizations and a 23% higher rate of death compared to living in urban areas.

Even after controlling for primary care visits, lack of access to specialists was still the primary driver of higher mortality and preventable hospitalizations among those in rural areas, said lead study author Kenton J. Johnston, PhD, MPH, an assistant professor of health management and policy at Saint Louis University, in Missouri.

“I was surprised to see how much of an impact seeing a specialist had on rural beneficiaries in terms of explaining the gap in mortality rates,” he said. “I thought it would be more even with social risk factors like income, poverty, and education.”

Johnston and colleagues used information from the Medicare Current Beneficiary Survey linked to respondents’ fee-for-service Medicare claims and administrative data for the years 2006 to 2013. They also linked data on healthcare supply at the level of Hospital Service Area provided by the Dartmouth Institute for Health Policy and Clinical Practice, and county-level rural-urban classifications from Area Health Resources Files provided by the US Department of Health and Human Services Health Resources and Services Administration.

Investigators limited the study sample to beneficiaries with heart failure, ischemic heart disease, diabetes, and chronic obstructive pulmonary disease or asthma, and at least two years of continuous enrollment in fee-for-service Medicare Parts A and B. Rural beneficiaries were more often white, had a higher burden of heart failure and ischemic heart disease, and had lower incomes and less education than did those in the suburbs or cities.

While the study did not look specifically at beneficiaries with kidney disease, given that some of the participants studied had diabetes and heart failure, “it’s pretty likely that a lot of them have comorbid kidney disease,” Johnston said. Some 3.3% of rural beneficiaries had a visit with a nephrologist, compared with 5.3% of urban beneficiaries.

The authors recommended several strategies the Centers for Medicare & Medicaid Services could use to improve access to specialty care for rural residents, such as expanding telemedicine programs, workforce reforms to increase the supply of specialists, and partnerships between rural and urban hospitals for the provision of specialty care, at least on an intermittent basis.

Nephrologists interviewed for this story said they were not surprised by the findings.

Several studies have shown that people in rural areas who have kidney disease have lower access to nephrologists than those living in suburbs and small cities (2), said Ladan Golestaneh, MD, FASN, a professor of medicine at Albert Einstein College of Medicine and Montefiore Medical Center in the Bronx, NY.

“Lack of early referral to nephrologists has been shown time and again to be strongly associated with faster progression to ESKD, and to lower rates of arteriovenous fistula placement and kidney transplant listing,” Golestaneh said. A number of patients “crash into dialysis,” she said, needing emergency dialysis by the time of diagnosis.

Nephrology is amenable to telemedicine and e-consults, said Golestaneh. “By utilizing these tools, primary care doctors can get guidance on blood pressure medication adjustment, how to prioritize patients with regard to follow-up, how to risk stratify patients according to the likelihood of progression, and probably most importantly, when to assist their CKD patients to go to bigger medical centers for vascular access placement and transplant evaluations.”

The emphasis on increasing access to home dialysis in the Advancing American Kidney Health Initiative, established by executive order in July 2019, also could be of benefit to rural residents, said Sumit Mohan, MD, MPH, FASN, an associate professor of medicine and epidemiology at Columbia University, New York.

But complicating the issue, fewer physicians are choosing to go into nephrology, Mohan said. Some 40% of fellowship training positions went unfilled in 2017 and 2018, according to an ASN Data Brief (3). “We now estimate that one in seven adults has CKD in the US—about 40 million people—and the overwhelming majority are unaware that they have it,” Mohan said.

Primary care providers may not be as skilled at identifying patients with CKD for a multitude of reasons, he said, including how lab tests are reported. In addition, patients frequently are not symptomatic in the early stages; when they do have symptoms, they include signs like weight loss, decreased appetite, or fatigue, which could be attributable to a range of conditions. “If you don’t have enough exposure to physicians who are specialists in the care of CKD, you can see how those people will do worse,” Mohan said.

With the growing burden of CKD there is a need for more nephrologists, and for primary care providers to get better at recognizing and managing early CKD, Mohan said. “We simply don’t have the bandwidth as a specialty to manage all of them,” he said.