Effects of Molidustate in the treatment of anemia in chronic kidney disease – DIALOGUE 1, 2, & 4 trials 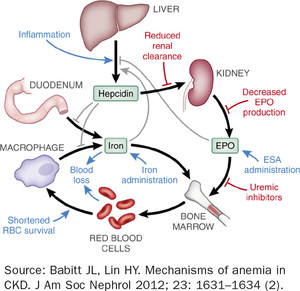 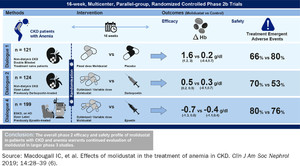 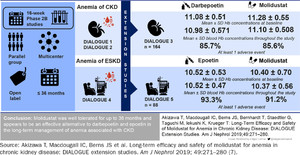 Advancement in hypoxia-inducible factor (HIF) stabilizers for treating anemia of chronic kidney disease (CKD) is a prime area to watch in 2020.

Anemia of CKD has been known to be associated with poor outcomes, decreased quality of life, left ventricular hypertrophy (LVH), and increased risk of hospitalization. It is also an independent predictor of mortality.

Although anemia in CKD has been primarily attributed to decreased erythropoietin (EPO) production by the kidneys, it is recognized that there are other contributing factors (2), such as uremic-induced inhibitors of erythropoiesis, disordered iron homeostasis (decreased iron reabsorption and release from the macrophages, increased production and decreased clearance of hepcidin, as well as blood (and iron) loss (Figure 1).

The main therapy consists of the use of erythropoiesis-stimulating agents (ESA) administered either intravenously (IV) or subcutaneously (SC) along with adjuvant iron therapy, given orally or intravenously. For this discussion, ESA refers to short-acting recombinant human erythropoietin (rhEPO; epoetin), medium-acting darbepoetin alfa, and long-acting epoetin beta.

Suboptimal response often leads to use of blood transfusions, which are not a preferred option, especially in that they may affect future kidney transplantation.

Three large randomized controlled trials (Table 1) have demonstrated that using ESA to raise hemoglobin levels in patients with CKD to the same range as healthy individuals has been associated with higher rates of cardiovascular events and/or mortality, compared to trying to achieve a lower hemoglobin target.

Large randomized studies of ESAs in patients with anemia of CKD

These studies raised serious concerns about ESA therapy and its safety. It is unclear whether these adverse effects were brought about by the high hemoglobin itself or by the use of high dosages of ESA.

Present in nearly all tissues, the hypoxia-inducible factor (HIF) is a heterodimer composed of HIF-α and HIF-β subunits. HIF-β is constitutively expressed, whereas HIF-α is modulated by oxygen tension via a family of HIF-prolyl hydroxylases (PHD) regulating its degradation by the proteasome. During hypoxia, HIF plays an important role in regulating the levels of EPO, glucose transporter-1, vascular endothelial growth factor (VEGF), and pyruvate dehydrogenase kinases 1 and 4. HIF stabilizers (also called PHIs, prolyl-hydroxylase inhibitors) are small-molecule oral agents resulting in the activation of HIF-mediated gene expression (3).

In a way, HIF action represents a physiological and natural adaptive mechanism of the body in response to low oxygen. Exposure to hypoxia stimulates the expression of various genes related to the hypoxia response, particularly those involved in red blood cell production, angiogenesis, and anaerobic metabolism (4). The HIF pathway also regulates iron homeostasis to meet the iron demands of erythropoiesis via direct and indirect mechanisms (increased transferrin, transferrin receptor, duodenal cytochrome B, divalent metal transporter-1, ceruloplasmin). The consequent normoxic stabilization of HIF-α leads to downstream pleiotropic effects, which in the pathological context of CKD promises to enhance erythropoiesis via an increase in endogenous EPO production and improved iron utilization (5).

With current guidelines recommending a relatively low hemoglobin target, it is likely that HIF stabilizers could potentially raise the hemoglobin target for patients with CKD safely to the same level as that of healthy individuals, because they increase endogenous EPO “physiologically,” compared to the mechanism of action of conventional ESA. Considering the pleiotropic effects of the PHD-HIF pathway, they could also confer other beneficial effects such as protection from obesity and metabolic abnormalities (4).

HIF stabilization is a novel treatment strategy that induces a physiological increase in endogenous EPO production and iron utilization efficiency (decreasing ferritin and hepcidin levels in non-dialysis–dependent patients with CKD). Clinical trials have demonstrated that these oral agents increase hemoglobin levels in both non-dialysis and dialysis patients.

One practical advantage with these new agents is that of oral administration, which avoids the pain and discomfort associated with injections. Interestingly, HIF stabilizers are also less expensive to produce than ESA because the manufacturing process relies on synthetic chemistry rather than recombinant DNA technology; there is also less need for sterile manufacturing conditions and no need for cold chain transport due to stability at room temperature (5). The absence of a protein structure also removes concerns regarding immunogenicity, a problem that was seen in epidemiological studies of ESA (5,8).

However, there are potential safety concerns, including angiogenesis and tumor growth, as well as effects on glucose metabolism, bone and cartilage growth (which are potential concerns in the pediatric population), and pulmonary hypertension.

During ASN Kidney Week 2019, two phase 3 randomized, open label, active-controlled studies of the efficacy and safety of the HIF stabilizer Roxadustat in the treatment of anemia in incident dialysis patients and dialysis-dependent CKD patients and one phase 3 randomized, double-blind, placebo controlled, international study of Roxadustat efficacy in patients with non-dialysis–dependent CKD and anemia were presented.

In the incident dialysis study, the conclusions were as follows:

In the Late Breaking and High Impact Clinical Trials Session at Kidney Week 2019, Robert Provenzano, MD, FASN, presented the “Pooled efficacy and CV safety results of Roxadustat in the treatment of anemia in CKD patients on and not on dialysis.”

In the April 2019 issue of ASN Kidney News, Jay Wish, MD, wrote about “HIF Stabilizers: Will They Have a Place?” in the special section on “Anemia of CKD.” He states: “It is likely that HIF stablizers will initially be favored in patients unable to reach target hemoglobin levels on high doses of ESA (deemed “ESA resistant”) and in non-dialysis–dependent patients who favor an oral drug over an injection.”