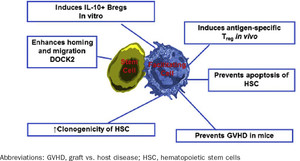 The enduring success of solid organ transplantation over the past six decades is also accompanied by the need for immunosuppression regimens with their related systemic toxicity. Transplantation between immunologically diverse individuals led to shortened allograft survival for immunologic reasons (acute and chronic rejection) and nonimmunologic reasons (toxicity of the immunosuppressive medication regimens).

As a proof of concept, kidney transplantation between genetically identical twins without the requirement of immunosuppressive regimens was successful and ushered in a new era. However, for the larger majority of individuals undergoing allotransplantation, the concept that transplanting the donor’s immune system (bone marrow) along with the solid organ had existed for a long time. This can allow the development of mixed chimerism, the coexistence of donor and recipient lymphohematopoiesis, which in time obviates the need for long-term immunosuppression. However, this field has been hampered by the safety—graft vs. host disease (GVHD) being the most common catastrophic complications—and logistics of such a dual transplantation.

Earlier clinical trials used simultaneous bone marrow and kidney transplantation, initially from HLA-identical living donors, and later single haplotype-matched living donors (1). The results were highly encouraging, with several patients coming off immunosuppression within the first year of transplantation, but the major adverse effects included GVHD, “engraftment syndrome” with acute kidney injury, capillary leak syndrome, and development of new donor-specific antibodies upon withdrawal of immunosuppression. It was thought that some of these reactions resulted from the nonselective nature of the transplanted hematopoietic cells.

Over the years, investigators from the University of Louisville, led by Suzanne Ildstad, MD, a transplant surgeon, have developed a proprietary hematopoietic stem cells (HSC) product from the living kidney donor bone marrow with tolerogenic CD8+/TCR− graft-facilitating cells, which is denoted FCRx. Central to the success of this product are “facilitating cells,” which resemble precursor plasmacytoid dendritic cells and are able to induce antigen-specific regulatory T cells in the recipient (Figure 1). These cells assist the HSC to engraft, proliferate, and subsequently induce chimerism in the recipient who received a kidney from the same donor.

This product was studied in a phase 2 clinical trial, the long-term follow-up of which is still ongoing, and the initial results from 31 patients with more than 12 months of follow-up have been reported (2). Of the 31 patients, durable (>12 months) chimerism developed in 23 patients, and 22 of them were able to be weaned from maintenance immunosuppression. The adverse effects mentioned above were noted to be uncommon in the study population. Importantly, GVHD occurred in only two individuals.

The living kidney donor, who is typically HLA-mismatched with the recipient, is prepared at least 2 weeks before the date of the kidney transplantation. Granulocyte colony-stimulating factor is used for 4 to 5 days, and peripheral blood stem cells are procured by apheresis. By use of a proprietary process at a central location, the mature donor GVHD-producing cells are deleted and the HSC, facilitating cells, and progenitors are retained. The product, FCRx, is then cryopreserved and transported to the transplantation center.

The recipient is conditioned by a nonmyeloablative treatment, as shown in Figure 2, several days before transplantation and with a dose of cyclophosphamide after kidney transplantation.. The living donor kidney transplantation is performed in the standard fashion along with the usual induction treatment. FCRx is infused intravenously on the day after kidney transplantation. Maintenance immunosuppression is provided with tacrolimus and mycophenolate mofetil at the usual dosing. At 6 months, peripheral blood is tested for T cell chimerism along with a protocol kidney biopsy to rule out acute rejection. If the recipient’s renal function is stable, no donor-specific antibodies are present, and if the chimerism is at or above 50%, mycophenolate mofetil is discontinued. Tacrolimus is slowly weaned during the following 3 to 6 months as well, as tolerated. At the time of the last reporting, 42 patients were enrolled into the phase 2 study, and 37 transplantations had been performed (3).

On the basis of these results, a phase 3 clinical trial, FREEDOM-1, was launched in October 2019. This is a 2:1 randomized controlled trial recruiting 120 patients who will undergo mismatched living donor kidney transplantation and receive either the FCR001 (renamed FCRx for the purpose of this specific indication) treatment or standard of care. At present five transplantation centers are participating, and the primary endpoint is the proportion of recipients who are free from immunosuppression and without acute rejection at 24 months. The estimated study completion date is April 2023.

This study is the most exciting development to date in the field of immunologic tolerance induction and, if successful, will represent a paradigm shift in the practice of organ transplantation. The mechanisms of how and why FCRx is able to promote mixed chimerism are still being elucidated and will also be a subject of great interest.

Several other clinical trials using a similar principle but differently reconstituted bone marrow products are being done. The two most successful such trials are reported by investigators from Stanford University and Massachusetts General Hospital, both of which completed phase 2 trials with plans of starting phase 3 trials in the near future.