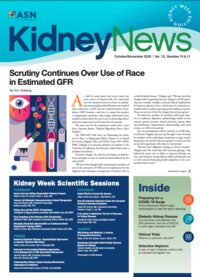 The gut microbiota affect the acquisition of host nutrients, use of energy, and metabolic pathways, including hepatic lipogenesis and insulin secretion. Short-chain fatty acids (SCFAs) are important as a nutrient source for intestinal cells and for maintenance of gut epithelial integrity, and they have systemic benefits, as noted in Figure 1. A shift toward protein and amino acid catabolism (rather than carbohydrate fermentation) produces bacteria-derived toxins such as indoxyl sulfate and trimethylamine N-oxide. 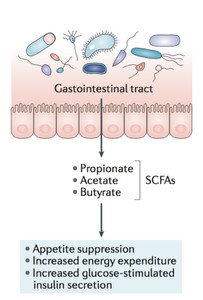 The adult gut harbors 100 trillion bacteria. This is tenfold greater than the number of cells in the human body. The abundance and diversity of bacteria increase from the stomach (102 to 104 cells/mL) to the colon (>1012 cells/mL) as oxygen tension decreases. Given the vast number of microorganisms concentrated in the intestinal tract, it is not surprising that the products of bacterial metabolism modulate the health of the host. The gut microbiome has been implicated in the pathophysiology of numerous chronic diseases, including diabetes mellitus (DM), obesity, heart failure, dementia, chronic kidney disease, and cancers.

Across these chronic disease states, there appear to be two commonly observed derangements of the gut microbiome. First, there is decreased bacterial production of short-chain fatty acids (SCFAs), such as butyrate, acetate, and proprionate. SCFAs are a major nutrient source for the epithelial cells lining the intestinal tract; thus, they contribute to the integrity of the intestinal barrier. Deficient production of bacterial SCFAs leads to an unhealthy epithelial barrier, or “leaky gut,” which allows translocation of toxins from the gut lumen into the bloodstream. Relevant to the pathogenesis of DM, SCFAs also modulate the host’s appetite and energy expenditure, and they increase glucose-stimulated insulin secretion (Figure 1).

Second, there is a shift in the bacterial metabolic profile in such a manner that instead of primarily fermenting carbohydrates, there is increased catabolism of proteins and amino acids, which generates toxins that exert systemic effects. Tryptophan is metabolized into indole by intestinal bacteria and is subsequently sulfated in the liver to form indoxyl sulfate. P-cresol sulfate is derived from phenylalanine and tyrosine and is conjugated by gut microbes to p-cresyl sulfate. Bacterial metabolism of quaternary amines (e.g., phosphatidylcholine, L-carnitine) yields trimethylamine, which is rapidly oxidized in the liver to produce trimethylamine N-oxide (TMAO). Indoxyl sulfate, p-cresyl sulfate, TMAO, and other bacteria-derived metabolites have traditionally been labeled “uremic toxins” because they were initially studied in the setting of chronic kidney disease. It may be time to change this terminology because these microbiota-derived toxins have now been implicated in nonkidney-related diseases. For example, blood TMAO levels are strongly associated with DM, and dietary restriction of precursors of TMAO results in improved insulin sensitivity and glucose metabolism. In heart disease research, higher blood TMAO is associated with adverse cardiovascular events in the general population. At the cellular level, the vascular injury induced by these toxins can be explained by increased oxidative stress and inhibition of cell proliferation.

Other pathways that have been implicated in DM include abnormal signaling from toll-like receptors (TLR) TLR2 and TLR5, leading to insulin resistance and increased abundance of gut Firmicutes. Microbiota can also induce lipogenesis in the liver, as well as upregulation of carbohydrate response element-binding protein (ChREBP) and liver sterol response element-binding protein type 1 and (SREBP-1).

Compelling evidence for a central role of the gut microbiome in the development of type 1 DM came from The Environmental Determinants of Diabetes in the Young (TEDDY) study. This multinational study analyzed the stool microbiome from children in the United States and three European countries, starting at the age of 3 months and continuing until they were 10 years old. Expression of microbial genes involved in the biosynthesis of SCFAs was lower in children who experienced type 1 DM than in matched control children. Furthermore, supplementing infants with probiotics within 27 days of life correlated with a decreased risk for the development of type 1 DM. Data from large genome-wide association studies have also identified strong links between bacterial SCFAs and risk for the development of type 2 DM.

Beyond impairment of glucose metabolism and insulin secretion, the gut microbiota also drive diabetic kidney disease. Baseline blood phenyl sulfate levels predict 2-year progression of albuminuria, and this bacterial-derived toxin has been shown in animal studies to induce podocyte damage. There is increased expression of Escherichia-Shigella and Prevotella bacteria in patients with diabetic nephropathy, compared with diabetic individuals who lack kidney disease. It has been proposed that increased levels of Escherichia-Shigella species contribute to the pathophysiology of diabetes by promoting breakdown of the gut epithelial barrier and by producing ethanol, which leads to disordered SCFA metabolism. Finally, frequent use of antibiotics (which disrupts the balance of normal intestinal flora) has been shown to correlate with the severity of diabetic nephropathy in patients with type 1 DM.

With all this accumulating evidence pointing to an integral role for the gut microbiome in the pathophysiology of DM, several studies have attempted to manipulate the microbiota as a novel way to treat DM. These interventions can be in the form of prebiotics (nondigestible food ingredients that can stimulate growth and/or activity of beneficial gut bacteria); probiotics (living organisms ingested in food or supplements that are believed to improve the health of the host); or symbiotics, which combine both prebiotics and probiotics.

The results so far have been mixed, and at best the impact on glycemic control is small. The largest studies have come from Malaysia and Australia. In the Malaysian study, non–insulin-dependent type 2 DM patients with baseline hemoglobin A1c 7.6% were randomized to placebo versus a probiotic formulation (68 patients per group). Probiotic therapy decreased A1c by 0.14%. In the Australian cohort, 156 nondiabetic overweight individuals were randomized to placebo versus probiotics; there was no change in A1c after 6 weeks, and, perplexingly, the probiotics group ended the study with a higher average fasting glucose level. Finally, a smaller study of 70 patients with type 2 DM in Iran found that symbiotic therapy stabilized A1c and microalbuminuria but did not improve serum or urinary markers of kidney function. General limitations of studies involving probiotics include the following: 1) we may not yet know the right mix of bacteria that will promote health, 2) selection of an appropriate high-risk population so as to detect meaningful changes in clinical outcomes at study completion, and 3) study duration that is too short to enable detection of differences between the treatment and placebo groups.

In summary, the gut microbiome modulates host metabolic pathways and risk for the development of DM (Figure 2). Key mechanisms include disturbances in the production of short-chain fatty acids and activation of toll-like receptors. Furthermore, bacteria-derived toxins from the gut contribute to insulin resistance and to vascular and podocyte damage. We do not know at this time how to manipulate the natural diet to engender a less pathogenic microbiome; and more work is needed to clarify the role of prebiotics and probiotics in diabetes management.