My involvement with KDIGO began a decade ago. In December 2009, international co-chairs Bertram Kasiske, MD, and Prof. Dr. Kai-Uwe Eckardt invited me to co-chair a Controversies Conference on cardiovascular disease in chronic kidney disease (CKD) with Professor Eberhard Ritz.

This conference, titled “Cardiovascular disease in CKD: What is it and what can we do about it?” was held in October 2010 in London. It focused on areas of clinical relevance in four breakout groups: 1) coronary artery disease and myocardial infarction; 2) congestive heart failure; 3) cerebrovascular disease, stroke, atrial fibrillation, and peripheral arterial disease; and 4) sudden cardiac death (1). Designed to address the broad area of intersection between cardiology and nephrology, the conference was unique in that the invited international experts included equal numbers of nephrologists and cardiologists (and additional representation by neurologists and other disciplines). Each breakout group was co-chaired by a cardiologist and a nephrologist (a breakout session on stroke and atrial fibrillation also included a neurologist). A main point of feedback I received after the conference related to how unusual and valuable an extended conversation between cardiologists and nephrologists was, inasmuch as this was unique in the experience of conference participants.

The conference report was published in Kidney International in July 2011 (1). In my opinion, the conference was a great success because it provided a remarkably prescient roadmap for future research (Table 1). The conference report provided a detailed picture of the areas of uncertainty in cardiovascular disease in patients with CKD. I still find it valuable to consult this roadmap, even a decade later, for perspective. For example, knowledge gaps related to the treatment of ischemic heart disease were identified. A decade later, we await results of the ISCHEMIA-CKD trial. The large knowledge gaps related to the treatment of atrial fibrillation for prevention of cardioembolic stroke occupied one breakout group, and the conference report prefigured a large body of investigation that occurred in the subsequent decade. Also noteworthy was the call for clinical trials involving anticoagulant agents that were novel at the time, now not so novel, for stroke prevention in patients with CKDG4-G5D with atrial fibrillation. Even a decade later, such a trial in this population is yet to be completed. 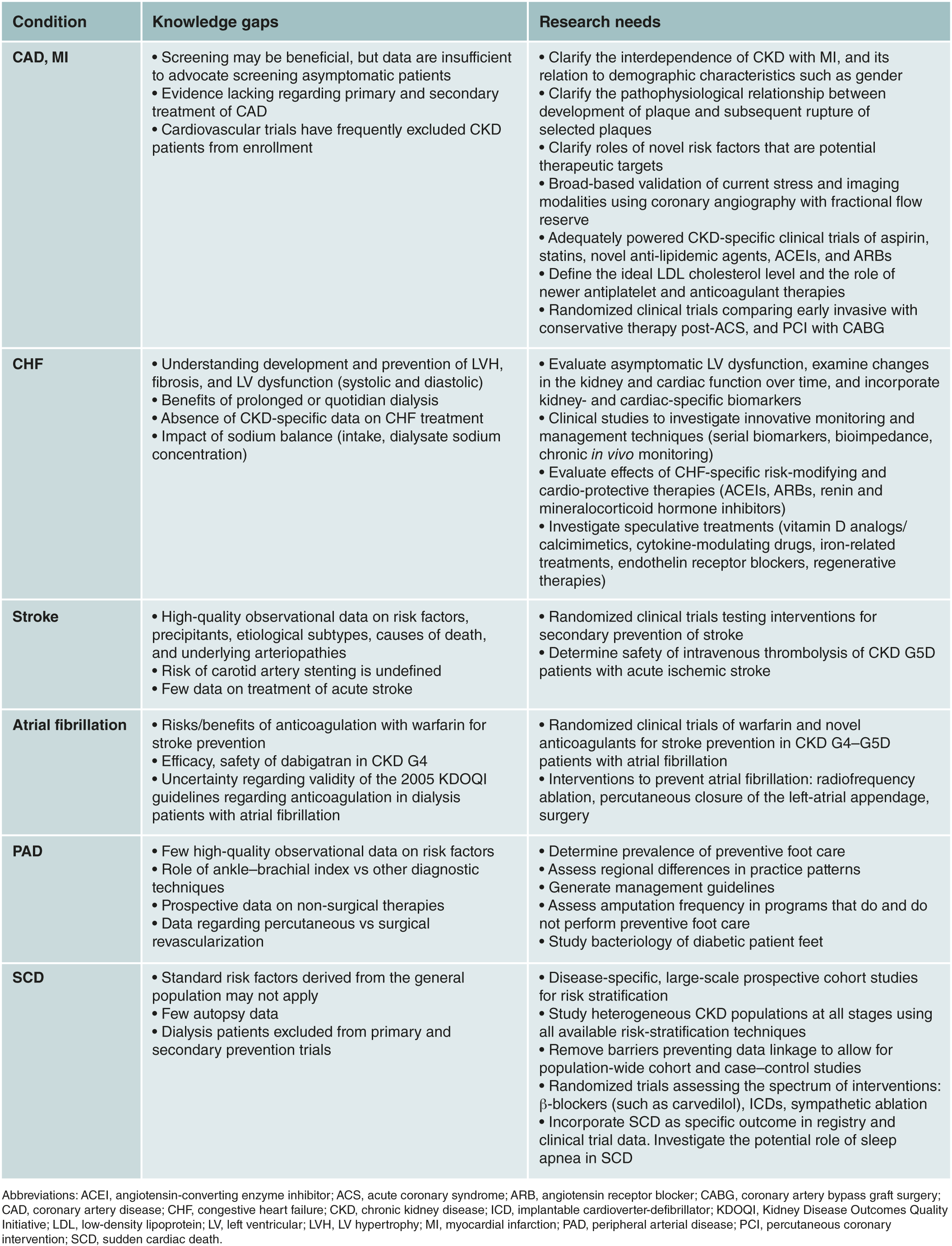 Half a decade later, I received a new invitation to help organize a series of CKD–cardiovascular Controversies Conferences modeled on the framework of the original London conference, but with a narrower focus. I accepted this invitation in December 2015, and on January 26, 2016, I sat down with KDIGO staff and the international co-chairs, Professors Wolfgang Winkelmayer and David Wheeler, in the Tangley room of the Hilton Paddington in London. We agreed to plan a series of four or five CKD–cardiovascular Controversies Conferences spanning the next 3 to 5 years. Much of the 2010 conference agenda would be revisited in the light of new knowledge, and some new areas of discussion would be added. We agreed that for all these conferences, broad representation of the international cardiology and nephrology communities would be desirable. The overall conference series was entitled “KDIGO Cardiovascular and CKD Conference Series on the Kidney, Heart, and Vasculature.”

The first conference, held in Berlin in October 2016, focused on atrial fibrillation and stroke in kidney disease, stroke prevention with oral anticoagulation, rate vs. rhythm: control of atrial fibrillation, sudden cardiac death, and potassium homeostasis. The overall charge to conference participants was to “identify key issues relevant to the optimal prevention, management, and treatment of arrhythmias and their complications in patients with kidney disease.” The conference co-chairs were Professors Mintu Turakhia and Christoph Wanner.

One notable result was the drafting of a new definition of sudden cardiac death specific to patients receiving hemodialysis. Echoing comments I heard in London six years earlier, many participating cardiologists were impressed by their first opportunity to work with nephrologists in the broad area of arrhythmias in CKD. The conference report was published in the European Heart Journal (2). This was a departure from the previous publication of conference reports in Kidney International; an international cardiology readership was considered an appropriate audience for the first in the new kidney, heart, and vasculature conference series. The KDIGO Controversies reports have traditionally enjoyed a very wide audience. Reflecting the interest in the 2010 London conference, the 2011 Kidney International conference report has been cited 617 times (as of May 8, 2019).

The second conference, focused on heart failure, occurred in Athens in May 2017 and was co-chaired by Professors Andrew House and Peter McCullough. It included a detailed discussion of the epidemiology, pathophysiology, diagnosis, and treatment of heart failure across the spectrum of CKD, including kidney transplant recipients. The conference report was published in Kidney International in June 2019.