It is now seven years since the KDIGO guideline on anemia management in chronic kidney disease (CKD) was published in August 2012 (1). To accuse KDIGO of being lazy and idle in generating any updates or revisions would be inappropriate on two accounts.

First, and most important, there has really not been enough truly robust scientific data that would dramatically alter the evidence base from the previous version of the anemia guideline, in which the four NEJM “biggies” on erythropoiesis stimulating agent (ESA) therapy were reviewed and critiqued by the evidence review team: US Normal Hematocrit Trial (2), CREATE (3), CHOIR (4), and TREAT (5). Within the past few months, however, this deficiency has perhaps been partially corrected with the publication of the PIVOTAL study (6); (please forgive the egotistical plug)—more on that later.

The second reason why KDIGO should be forgiven is that they organized a superb Controversies Conference on iron management in San Francisco in March 2014, with a much-cited conference report published in Kidney International in January 2016 (7).

The iron Controversies Conference and PIVOTAL share a common theme: both had the aim of critically examining the risk-to-benefit ratio of intravenous (IV) iron in patients with CKD. The conference highlighted several concerns and potential adverse consequences of using IV iron (Table 1), whereas PIVOTAL was a large randomized controlled trial that compared hard endpoints in patients randomly assigned to a proactive high-dose IV iron regimen with those randomized to a reactive low-dose IV iron regimen. The primary endpoint was a composite of all-cause death, myocardial infarction, stroke, and hospitalization for heart failure; secondary endpoints included the components of the composite primary endpoint and a recurrent event analysis of the primary endpoint, along with some additional safety outcome measures. 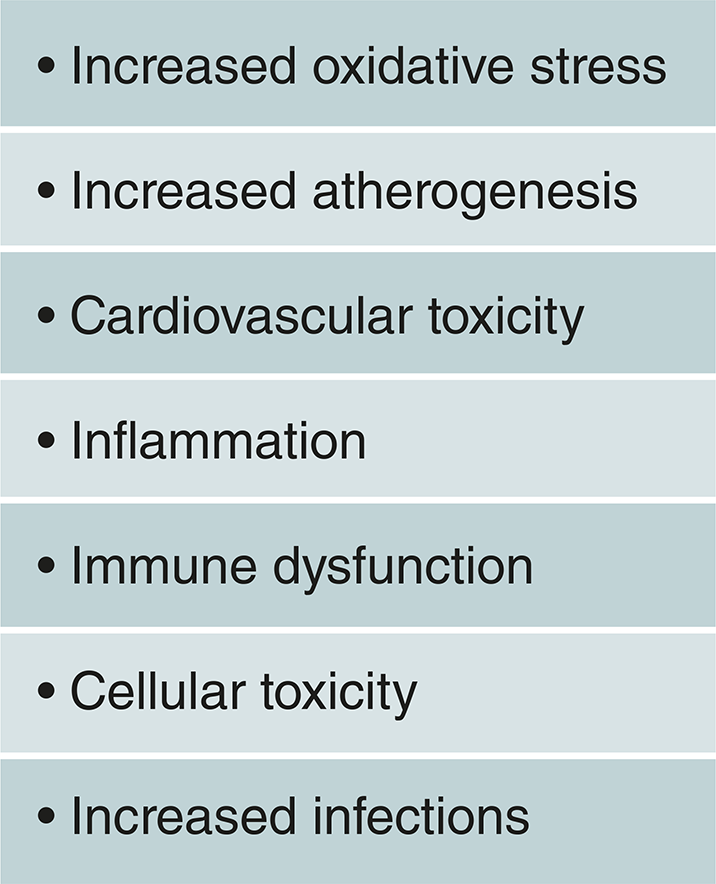 The statistical plan prespecified an initial noninferiority analysis, which, if met (which it was; p < 0.001), allowed progression to a superiority analysis; this too was met with a p value of 0.04. Thus, the authors concluded that proactive high-dose IV iron reduced the composite hard endpoint of all-cause death and the three nonfatal cardiovascular events. Secondary endpoints included a recurrent event analysis, which again was positive in favor of the high-dose iron arm (p = 0.0027), and also fatal or nonfatal myocardial infarction (31% reduction in favor of the high-dose arm; p = 0.015) and hospitalization for heart failure (34% reduction in favor of the high-dose arm; p = 0.023). The ESA dose requirements and use of blood transfusions were both reduced by approximately 20%. Contrary to widespread opinion and observational data, no excess of infections was seen in the high-dose iron arm (6). This study therefore generated level A evidence to inform future clinical guidelines, including KDIGO, and will no doubt be scrutinized by the evidence review team in relation to any KDIGO update.

The other huge development in the anemia field has been the extensive global assessment of a new class of agents, which are orally active and act by upregulating erythropoietin gene expression in the kidneys and liver. This new class of drugs is called the hypoxia-inducible factor prolyl hydroxylase domain inhibitors (HIF PHD inhibitors) (8, 9).

The HIF PHD inhibitors inhibit the breakdown of the transcription factor, HIF, thus inducing an increase in endogenous levels of erythropoietin. Phase 2 trials of five such drugs in this class (roxadustat, daprodustat, vadadustat, molidustat, and enarodustat) have confirmed the ability of HIF PHD inhibitors to both correct anemia and maintain hemoglobin in patients already taking an ESA (Table 2).

Five of the HIF PHD inhibitors currently in clinical development 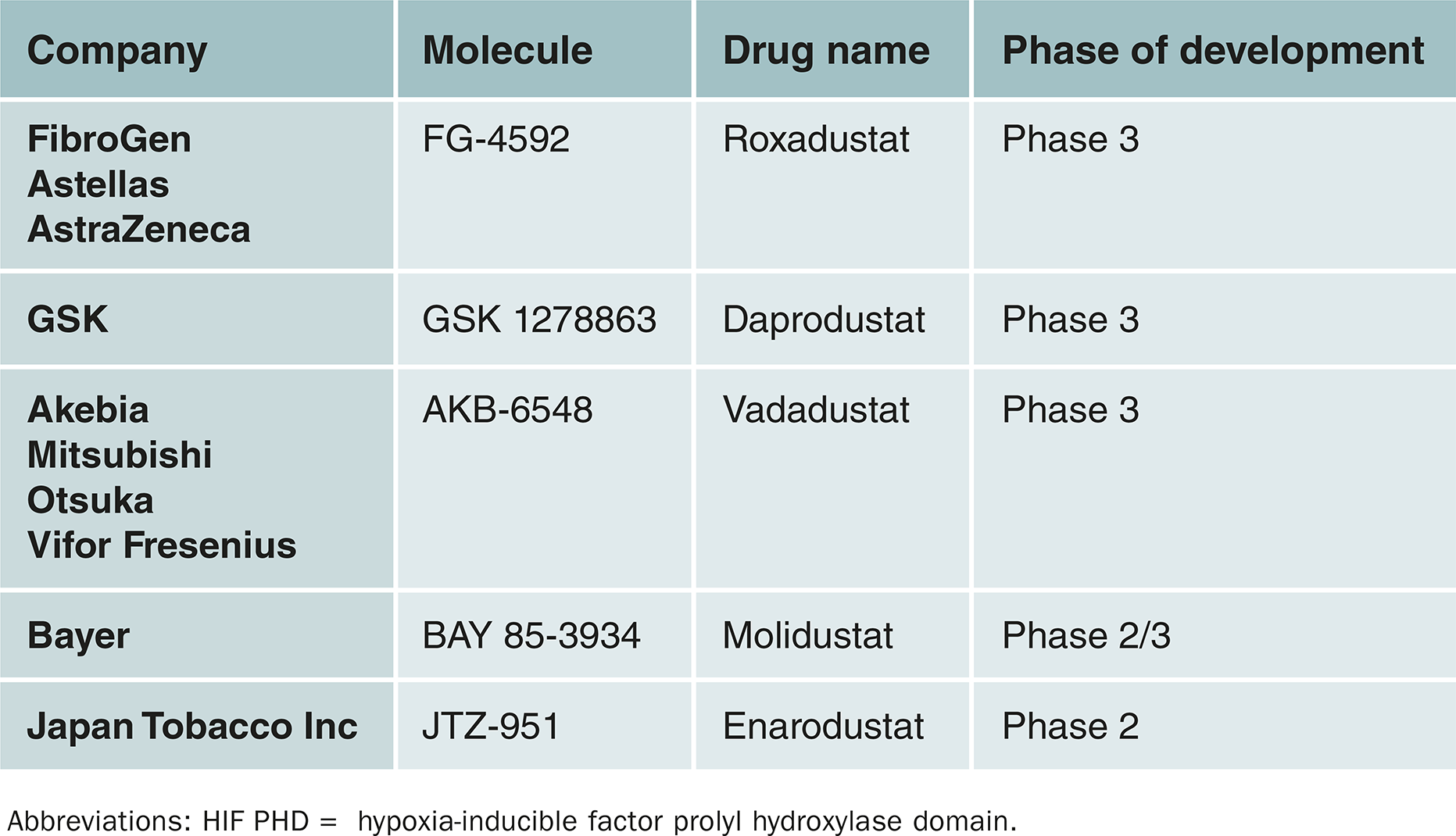 Furthermore, there are positive effects on iron metabolism, with the upregulation of several iron regulatory genes and a secondary downregulation of hepcidin, all of which seek to improve iron availability and enhance erythropoiesis. Finally, this new class of drugs achieves its biologic effects with the patients exposed to much lower circulating levels of erythropoietin, which could have positive cardiovascular benefits. This is currently being tested in large phase 3 clinical trials in thousands of patients with major adverse cardiovascular events (MACE) endpoints. Preliminary information on the MACE results from the phase 3 roxadustat program has recently become available in a FibroGen press release (10). Further information from the phase 3 trials on the safety of roxadustat, and of the other HIF PHD inhibitors, will be forthcoming, and this is particularly pertinent given that these agents also upregulate several hundred other hypoxia-sensitive genes, including vascular endothelial growth factor, glycolytic enzymes, and others, which could potentially produce hitherto unexpected adverse clinical consequences. Whether or not these theoretic concerns are borne out in clinical practice remains to be seen.

Once we have the phase 3 data to inform us about cardiovascular events and safety, it then seems timely to update the KDIGO anemia guideline. Several scenarios are possible. The studies could meet noninferiority for their primary endpoint in terms of MACE outcomes, with regard to both active ESA comparator and placebo. MACE outcomes could be reduced with HIF PHD inhibitors in comparison with ESA therapy. MACE events could be increased in comparison with ESA therapy. In addition to the primary endpoint, many other permutations of outcomes are possible with regard to the secondary endpoints. Speculating on all the possible permutations, along with their implications for future clinical use, is beyond the scope of this commentary, but review of the data by the evidence review team and a future working group of KDIGO will be helpful, informative, and vital to ensure that the correct evidence-based guidelines on their use are achieved.