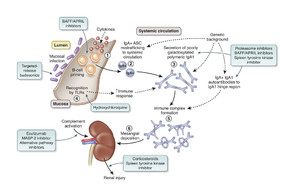 KDIGO Quo Vadis: Updating Guidance for the Management and Treatment of Glomerulonephritis

In November 2017, KDIGO hosted a Controversies Conference in Singapore on glomerular diseases. The goal was to determine the best practice and evidence gaps in the treatment of glomerular diseases, review the key literature published since the 2012 KDIGO Glomerulonephritis (GN) Guideline, identify topics or issues for future guideline updating, and outline unmet needs in the management of GN (1, 2).

Since the 2012 KDIGO GN guideline, there have been marked advances in our understanding of the pathogenesis, diagnosis, and potential new treatment approaches or therapeutic agents for several glomerular diseases. A few highlights follow.

IgA nephropathy (IgAN) has now been classified by the histology-based MEST and MEST-C scoring system, which has potential to improve outcome prediction in IgAN. Regarding treatment, two major trials, STOP-IgAN and TESTING, have provided conflicting results on the use of corticosteroids in IgAN, but they raised similar safety concerns. The results of the phase 2 NEFIGAN trial suggested that delivering a corticosteroid agent (enteric steroid budesonide) to the gut immune system may be beneficial (Figure 1). Also encouraging is that other novel approaches to the treatment of IgAN are being tested, including inhibition of complement pathway components and tyrosine kinase signaling.

Another remarkable breakthrough since 2012 was the discovery of the podocyte autoantigens PLA2R and THSD7A in membranous glomerulopathy (MN). Anti-PLA2R antibody is present in 50% to 80% of MN cases, whereas the anti-THSD7A can be found in 2% to 4% of such cases. Emerging data now point to the diagnostic, prognostic, and disease-monitoring value in particular of anti-PLA2R. The use of anti-PLA2R to detect immunologic remission in MN has been incorporated into recent clinical trials such as GEMRITUX, STARMEN, and MENTOR, which have examined the role of B-cell targeting to induce remission.

The use of a multitargeted approach to the treatment of lupus nephritis (LN) has garnered considerable interest in the nephrology community. Whereas the initial trials suggesting that a regimen of corticosteroid, mycophenolate mofetil, and a calcineurin inhibitor was superior to standard of care were performed in all Asian cohorts, a recent successful international trial recapitulated these results in an ethnically diverse LN population. Several other novel approaches to the treatment of LN are being trialed, including antibodies targeting the interferon-α receptor.

The approach to antineutrophil cytoplasmic antibody (ANCA)-associated vasculitis has changed considerably with the approval of rituximab as an alternative to cyclophosphamide as first-line therapy. The use of rituximab alone still remains controversial for patients with severe ANCA-associated nephritis. In addition to induction, rituximab has found utility for the maintenance of remission and may offer an advantage over azathioprine, the standard of care for maintenance. The recently presented PEXIVAS trial did not support the use of plasma exchange to enhance remission but demonstrated its use for reducing corticosteroid exposure in ANCA patients. Similarly, the phase 2 trial of avacopan, a complement component C5a receptor blocker, demonstrated its potential as a corticosteroid sparing agent in the treatment of ANCA.

To incorporate these and other updates to the GN guideline, a meeting was convened in April 2018 with the guideline co-chairs, Drs. Jürgen Floege and Brad Rovin, Methods chair Marcello Tonelli, and the Evidence Review Team from the Cochrane Kidney and Transplant group. A key component of these discussions was to outline the literature search parameters (i.e., PICOS [Population, Intervention, Comparator, Outcomes, and Study design criteria]) for each of the key questions to be addressed in the guideline. It was clear that patient-reported outcome measures (PROMS) would be important for this guideline update, given the scarcity of clinical trials that examined hard outcomes in kidney patients. Effort has been made to consider such measures during the literature review.

The role of kidney biopsy was a key topic in conference discussions on the general management of GN. Although kidney biopsies are still the foundation of diagnosis and often of prognosis for most glomerular diseases, in some instances other diagnostic tools are now available that may be less invasive but can still aid clinical decision-making. An example may be the use of anti-PLA2R antibodies to diagnose primary MN in the absence of other confounding conditions. Assessment of proteinuria and hematuria still plays a prominent role in GN management, but the need for more specific biomarkers of disease activity, chronic kidney damage, and disease response was recognized as a priority for a future research agenda.

With an improved understanding of the pathophysiology behind glomerular diseases, there has been a greater appreciation that the classification of GNs should embrace an approach that considers both pathobiology and renal histology (Table 1). This is perhaps best exemplified by the term membranoproliferative glomerulonephritis (MPGN), which is a histologic descriptor of disease patterns caused by diverse origins, ranging from monoclonal gammopathies to alternate pathway of complement activation (3). Other areas where nomenclature needs to be updated include steroid-sensitive and steroid-resistant nephrotic syndrome and focal segmental glomerulosclerosis (FSGS). Therefore, an important aspect of the new guidelines will be to provide a uniform definition and classification of GNs.

A pathogenesis-based approach to glomerulonephritis 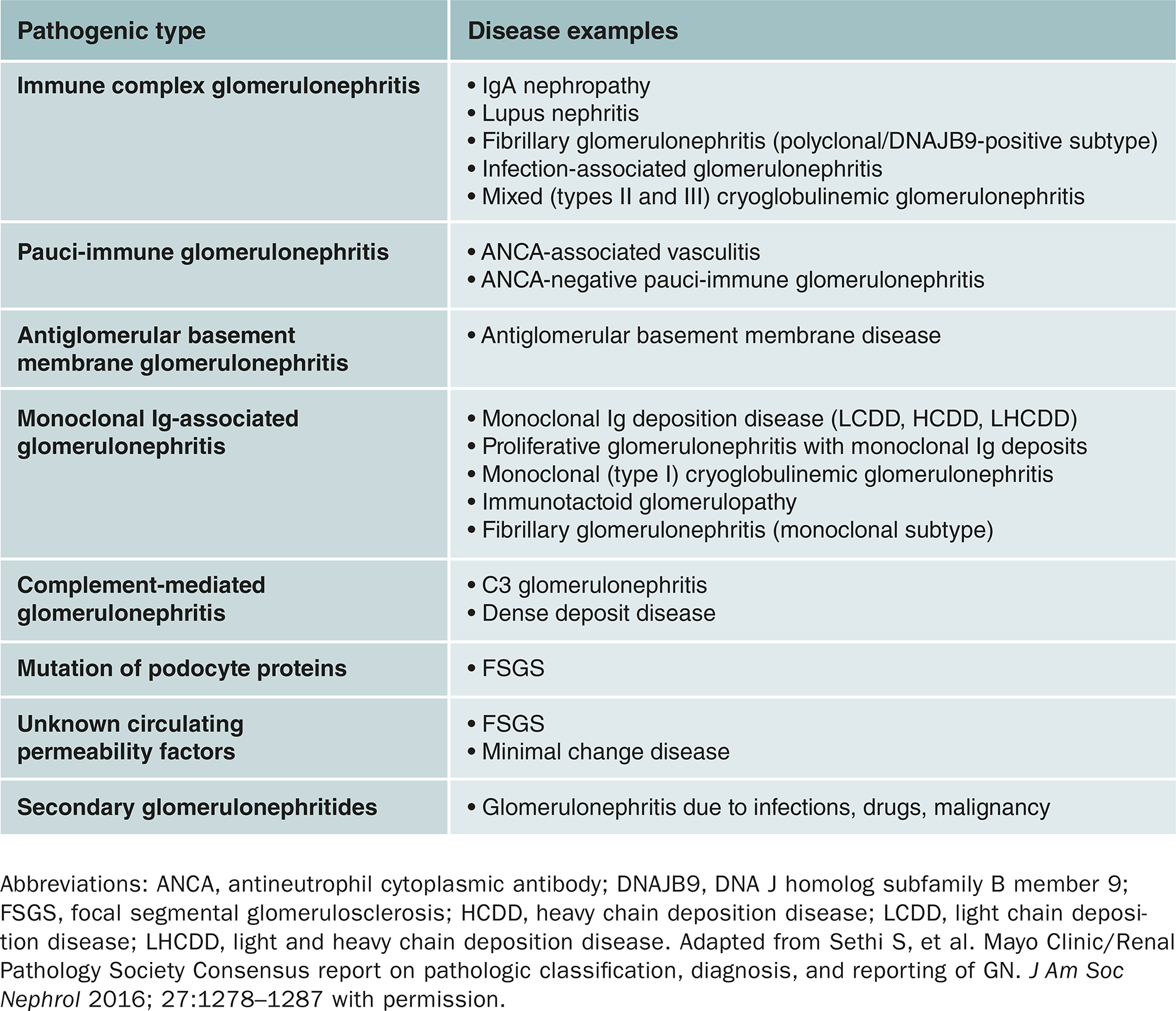 Logistically, the systematic reviews that will be used to inform the 2020 guideline update have largely been completed and the Work Group panel is now in the process of finalizing guideline recommendations, reviewing the final grading for guideline statements, and formulating the underlying supportive rationale. This guideline update is being developed in a new era for KDIGO, which now includes a new approach that calls for a transparent and closer coupling between the recommendation statements and the underlying evidence base while still providing much-needed guidance to our audience through the use of practice points, particularly in areas where strong conclusive evidence is lacking in the GN population. Additionally, the guideline will be published both in print and in an electronic format, MAGICApp, so as to create a “living guideline” that can be updated in real time as new trial results become available.