Applying the KDIGO framework to accept or decline donor candidates based on a transplantation program’s threshold of acceptable projected lifetime risk of kidney failure, quantified as the aggregate of risk related to demographic and health profile and donation-attributable risks. Reproduced with permission from Lentine et al. Transplantation 2017; 101(8S Suppl 1):S1-S109. 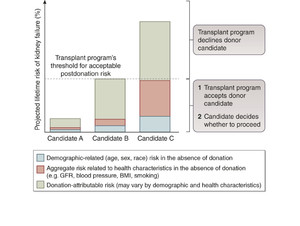 Since the advent of the successful practice of living donor kidney transplantation more than 60 years ago, over 150,000 healthy persons in the United States have donated a kidney to help a family member, a friend, or even a stranger. Currently, more than 30,000 living kidney donations are performed worldwide each year. Living donor transplantation is clearly established as the best treatment option for kidney failure, offering patients the best chance of long-term dialysis-free survival, with a better quality of life, at lowest costs to the healthcare system. However, despite the tremendous benefits to recipients and society, the outcomes in and optimal care of donors themselves have been relatively understudied. Fortunately, things are changing, including recent landmark developments in living donor risk assessment, policy, and guidance. One key advance is recognition of the critical importance of perspectives of comparison for drawing inferences about donor health outcomes. General population comparisons can have value as one context. However, because donors are carefully evaluated and selected, methodologies to assemble control groups of healthy nondonors who would otherwise meet donor selection criteria have been a breakthrough in facilitating estimates of the attributable risks of donation. The policy of the U.S. Organ Procurement and Transplantation Network now requires that the small but significant donation-attributable risks of kidney failure and gestational hypertension be disclosed to potential living donors. This is an example of new evidence informing policy to support the optimal care and informed choice of living donors.

The limitations of available data and inconsistent guidance have underscored a critical need to strengthen the rigor, safety, and defensibility of donor selection. Importantly, 2017 also marked the publication of the first Kidney Disease: Improving Global Outcomes (KDIGO) “Clinical Practice Guideline on the Evaluation and Care of Living Kidney Donors.” A central goal of the guideline is to advance a framework for evaluating and selecting donor candidates based on the long-term risk of adverse outcomes estimated from simultaneous consideration of a profile of demographic and health characteristics. Prior living kidney donor guidelines described postdonation risk in relation to single predonation characteristics assessed in isolation, and they differed on the recommended specific thresholds for a characteristic that should be used to accept or decline living kidney donor candidates; the inconsistency potentially undermined defensible decision making. For example, before the 2017 KDIGO guideline, most programs excluded donors with a body mass index exceeding a predetermined threshold, usually between 30 and 35 kg/m2, without consideration of additional donor characteristics or risk factors. By comparison, the KDIGO guideline endorses individualizing the decision to approve donation by obese candidates based on their predicted long-term risk in relation to the transplantation program’s acceptance threshold. A risk threshold is defined as the upper limit of acceptable risk established by a program for donor candidate selection. Under the KDIGO framework, when a candidate’s estimated risk is above the acceptable threshold, the transplantation program is justified in declining the candidate and can ground its decision in a quantitative framework. When a donor candidate’s estimated risk is below the acceptable risk threshold, the transplantation program should accept a donor candidate, and it should be the candidate’s decision whether to proceed with living kidney donation after being informed of the risks (Figure 1). Once established, acceptable risk thresholds should be applied consistently and transparently for all donor candidates evaluated at a program.

Living donation may have an impact on multiple health outcomes, but the KDIGO framework focuses on the development of kidney failure requiring dialysis or transplantation because it is a central outcome of a donor candidate’s long-term risk and has a biologically plausible link to donation. The KDIGO framework was informed by a systematic evidence review. However, in response to a lack of sufficient data for a quantitative framework, the guideline development methodology also included partnering with the Chronic Kidney Disease Prognosis Consortium to conduct a de novo meta-analysis of data on nearly 5 million healthy persons from seven general population cohorts who are similar to kidney donor candidates to develop an online tool for projecting 15-year and lifetime risks of ESKD based on predonation demographic and health factors. Although this work is critically important in establishing a framework, it is only a starting point; ongoing efforts are needed to improve the precision and generalizability of predonation risk estimation, including consideration of additional factors such as genetic and familial traits, and to incorporate tailored prediction of the risk impact of donation.

Extending the theme of personalized risk prediction, the potential relevance of novel genetic risk markers in the evaluation of living donor candidates, such as recently recognized kidney disease risk variants (KDRVs) in the apolipoprotein L1 (APOL1) gene, is a subject of intense attention. Beyond implications of the presence of two donor KDRVs for increased risk of allograft loss in the recipient, a donor’s APOL1 genotype may also have critical implications for the long-term health of the living donor. A recent cohort study of 136 African-American living kidney donors reported that those with APOL1 high-risk genotypes had lower predonation kidney function and faster rates of decline in postdonation estimated GFR; 11% (2/19) experienced ESKD after an average of 12 years of follow-up. Some transplantation programs now offer APOL1 genotyping in the evaluation of African-American living kidney donor candidates, but the practice is controversial and varies across transplantation programs because of uncertainty about the implications of genotype for the outcomes in the individual. While recommending that APOL1 genotyping may be considered in the living donor candidate evaluation, the 2017 KDIGO guideline identified the need to define the role of APOL1 genotyping in the evaluation of donor candidates with recent African ancestry as a key research priority. Importantly, late-2019 marked the launch of enrollment in the collaborative “APOL1 Long-Term Kidney Transplantation Outcomes” (APOLLO) Consortium, sponsored by the National Institutes of Health, charged with prospectively assessing the effects of APOL1 KDRVs on the outcomes in recipients of kidneys from donors with recent African ancestry, and the impact of APOL1 KDRVs on the health of living kidney donors. An ancillary study specifically focused on and powered for the kidney outcomes in living donors—the “Living Donor Extended Time Outcomes” (LETO) study—is also being launched in 2020. The critical importance of accurately assessing risk among African-American potential donors is highlighted by new data demonstrating growing disparities in access to living donor transplantation among African-American candidates for transplantation.

To strengthen informed choice by prospective living donors, and the safety, protection, and care of all living donors, robust commitment and collaboration across researchers, clinicians, and policy makers is needed to measure and present risks and benefits, and to support donor candidates in informed decision-making. The more we understand risk, and disclose it transparently, the more we can ensure public trust and advance living donation within a defensible system of practice. An additional promising development is the launch of the Living Donor Collective pilot, a scientific registry designed to prospectively follow up donors and donor candidates over their lifetimes. The 2017 KDIGO guideline is a milestone in advancing a new framework for consistent, transparent decision-making in the evaluation and selection of living donor candidates that can and should be updated with evolving evidence. Empiric studies including formal evaluations of education, removal of disincentives, practice efficiency, and risk evaluation and communication are feasible and necessary to advance the evidence base that grounds the practice of living donation and living donor transplantation. Ongoing efforts to identify and address knowledge gaps related to living donor care are vital in honoring the life-saving gift of living donors and in supporting opportunities for healthy, willing persons to safely give the gift of life to patients in need.