A Brief History of KDIGO: Now in Our Seventh Year of Independence

KDIGO’s history is a history of guidelines in nephrology. There were none in 1994 when a conference called Controversies in the Quality of Dialysis Care was held under the auspices of the National Kidney Foundation (NKF, United States). It was co-chaired by Dr. Gary Eknoyan. One recommendation from that event was the call for the development of nephrology guidelines. That thought resonated with various stakeholders, who provided funding and expertise to enable the NKF to develop evidence-based clinical practice guidelines. Four guidelines under the banner of the DOQI (Dialysis Outcomes Quality Initiative) were published in 1997.

Those guidelines made a major impression on American nephrologists and were used in everyday practice. The government data entity, the United States Renal Data System (USRDS), tracked areas covered by the guidelines and reported significant improvement in the uniformity of care. The NKF continued to develop guidelines, although Dr. Eknoyan amended the name to KDOQI (Kidney Disease Outcomes Quality Initiative) to better reflect on all aspects of chronic kidney disease (CKD) care rather than just dialysis care. Several more guidelines were produced between 1997 and 2002.

Publication of the Chronic Kidney Disease Guideline in 2002 strengthened the concept that guidelines should be developed globally, rather than country by country. Care was taken to vet this idea with non-American opinion leaders, and after 2 years of study, their opinions were enthusiastically positive. So, the concept for an international nephrology guideline body—KDIGO (Kidney Disease: Improving Global Outcomes)—was born. It was to be truly global, not just the expansion of an American effort. Thus, the organization was incorporated in Brussels and became a foundation in the public interest under Belgian law, with NKF continuing to provide management support.

KDIGO’s first guideline on the management of hepatitis C in patients with CKD was published in 2008. It was followed by Mineral and Bone Disorders and Care of the Transplant Recipient in 2009. During these years KDIGO’s other core program, Controversies Conferences, began to thrive. The format was established where 60 to 70 international experts were brought together to discuss and debate important issues that weren’t totally resolved and these conferences were well known for not only providing clinical guidance in controversial areas but helped advance the future evidence base by identifying the key research agenda.

By 2009 KDIGO had become a global leader in nephrology guidelines designed to inform clinical decisions.

The economic downturn in 2009 and 2010 caused the NKF to rethink its priorities. One area to be cut back was global guidelines. This came at a time when KDIGO’s reputation was growing. Two landmark Controversies Conferences were held during this time: Definition, Classification, and Prognosis in CKD, and Cardiovascular Disease in CKD.

KDIGO’s Mineral and Bone Disorder guideline created CKD-MBD as a near-universal term and had major global impact, and work began on other new guidelines. In 2011 John Davis left the NKF but retained the title of Chief Executive Officer of KDIGO. A meeting was held in the Netherlands with Bert Kasiske, Kai-Uwe Eckardt, David Wheeler, and John to discuss KDIGO’s future. The decision was made to go at it alone. Negotiations began to terminate KDIGO’s management contract with the NKF, and plans were made for moving forward. John continued to manage KDIGO and recruited Danielle Green to join him. With great help from Dr. Yusuke Tsukamoto in Tokyo, some money was raised to bridge this critical period of transition.

KDIGO officially became an independent Belgian corporation on October 1, 2012. It had €19,000 in the bank. Bert and David were the co-chairs, with John and Danielle as the staff. A small but excellent executive committee was recruited to provide governance and guidance. KDIGO then began a steady building process that was directed at sustaining its place in global nephrology.

To reassert the organization’s standing in the nephrology community, KDIGO published four original guidelines in 2012. Two more guidelines came in 2013, along with two Controversies Conferences. Michael Cheung and Tanya Green were subsequently recruited to the staff, and efforts were made to bring all of KDIGO’s operations into full compliance with Belgian regulations and standard nonprofit practices.

KDIGO’s goal in those early years was simply to get better every day and to strengthen its independent status. Being self-governed, self-managed, and self-funded were important elements of KDIGO’s growth. The guideline on the Evaluation and Care of Living Kidney Donors was the first to be wholly developed under its independence, as was the Controversies Conference on CKD–MBD: Back to the Future, and KDIGO has been remarkably active since then (Table 1). 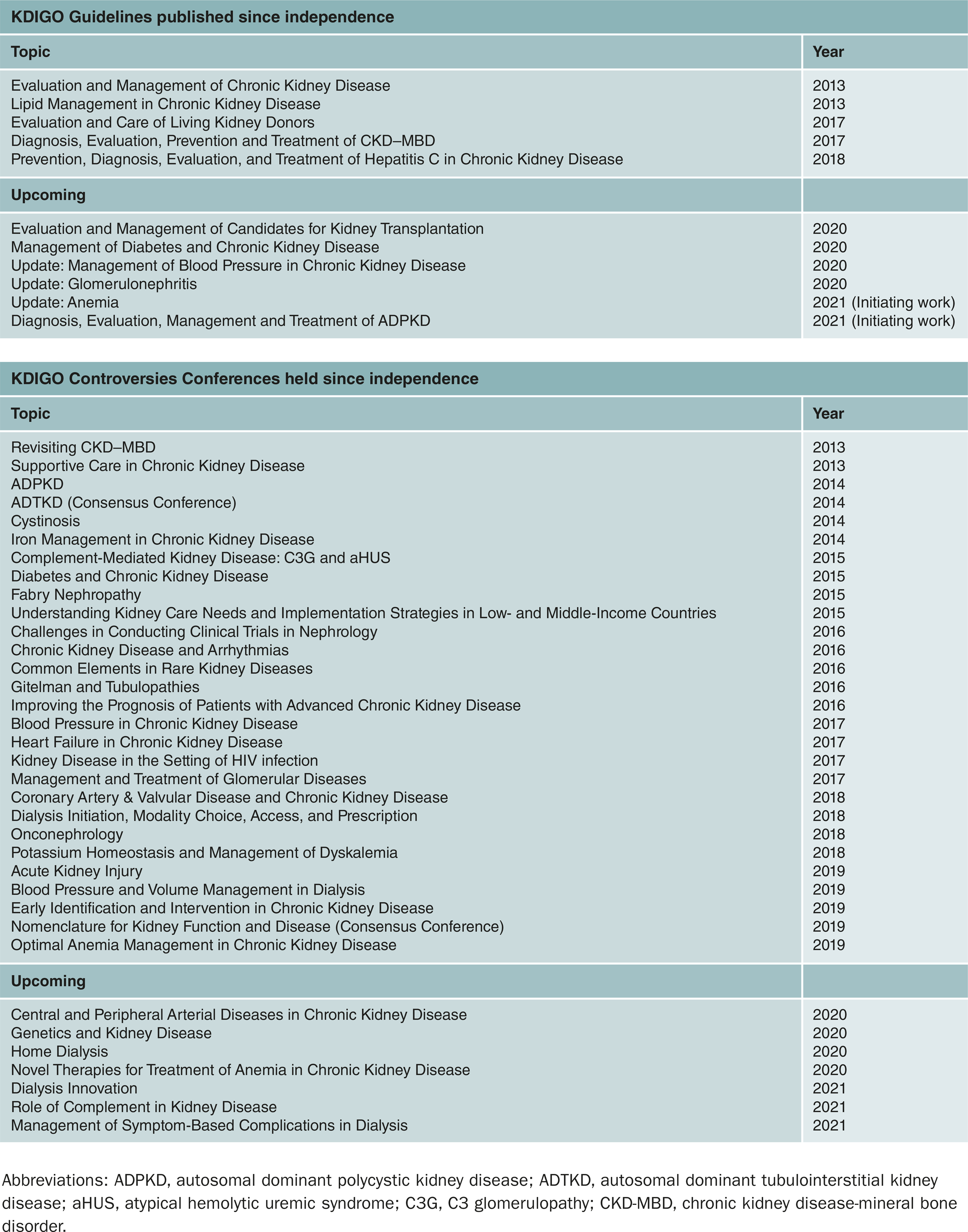 KDIGO began an emphasis on implementation programs and developed a presence in major congresses, both globally and locally. New volunteers were brought in, and previous volunteers were recognized as members of the KDIGO global network. A reception in Philadelphia in 2015 attracted over 200 people. KDIGO is continuing to be innovative and transparent while experimenting with new technologies like electronic guideline publishing. Naturally, KDIGO also pays more attention to updating its existing guidelines and is increasingly focusing on a more robust and streamlined guideline development process and methodology.

Corporate support has always sustained KDIGO’s growth. While KDIGO does not solicit or accept funding for the development of guidelines or its updates, KDIGO has attracted several major sustaining partners which provide the resources needed to conduct all of its programs. KDIGO especially appreciates the long-term commitments of companies like Fresenius, Boehringer-Ingelheim, and AstraZeneca. KDIGO takes pride in our transparency and full disclosure policy while striving to enhance its conflict of interest safeguards.

KDIGO now has three guidelines in development at all times and holds four or five Controversies Conferences each year. Implementation presentations and tools, along with an improved website and app, are part of a concerted effort to make the work more accessible to clinicians everywhere. KDIGO’s vision focuses on its core programs while seeking appropriate collaborations and strengthening its volunteer base.

Although still relatively young, KDIGO has come a long way. It has taken a few risks but remains dedicated to its only mission: to improve outcomes for patients. It is with this optimism and commitment that KDIGO builds on the past and looks toward the future with enthusiasm.

Since its founding in 2003, KDIGO has been inextricably linked with the development of global clinical practice guidelines in nephrology. Significant advances in guideline methodologic approaches and in our understanding of kidney disease pose new challenges on how best to synthesize and appraise the ever expanding data and distill expert guidance into guidelines that are most useful to clinicians. In the following series of articles, we present brief summaries of KDIGO’s recent accomplishments and outline their vision plan for maintaining guidelines up-to-date and improving their knowledge translation.