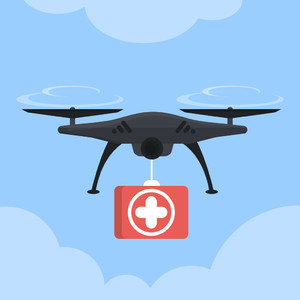 You can order just about anything online and track it every step of the way until it reaches your doorstep thanks to modern logistics and technology. Now, those same technologies are being applied to kidney transplants to speed the process and enable more transplants.

It currently takes on average about 18 to 20 hours to get a kidney from the donor to the transplant patient, explained Joseph Scalea, MD, assistant professor of surgery at the University of Maryland Medical Center in Baltimore. During that time the organ is chilled and kept in a solution to protect it from injury, but each hour it spends this way increases the risk of poor outcomes like delayed graft function after transplant or failure of the transplanted organ.

But Scalea and his colleagues aim to change that by enabling “on demand” delivery of donor kidneys using drones and other technology. In April 2019, he and his team celebrated the first transplantation of a kidney delivered by an unmanned drone. It’s just the first step for drone-facilitated delivery. More testing of better, larger, and faster drones lies ahead before this technology will be widely available. But Scalea is hopeful.

“If we can make a more efficient system, I think we could do more transplants,” he said.

Scalea is not alone in his effort to leverage technology to streamline kidney transplants. Donor kidneys are now labeled and tracked using a United Parcel Service (UPS)-like bar-code system. And the technology team at the United Network for Organ Sharing (UNOS) has two pilot projects underway that could expedite the process of matching a donor kidney with a patient in need of a transplant.

Trina Glispy of Baltimore, a 44-year-old who had been on dialysis since 2011, received the first drone-delivered kidney on April 19, according to the University of Maryland Medical Center. The roughly 10-minute delivery flight across 2.8 miles marked a major achievement for Scalea and his 100-person team of clinicians, scientists, and engineers who worked for three years to make it happen.

“The whole thing was amazing,” Glispy said. “Years ago, this was not something that you would think about.”

The current system for organ transport is logistically complicated, using a mix of ground-based carriers, commercial airlines, chartered jets, or helicopters, said David Klassen, a nephrologist and chief medical officer at UNOS. The safety of transplant teams who may accompany the organ on late night flights is also a concern, Klassen noted. It can also be expensive, noted Scalea, who said the average transport cost is about $40,000 per organ.

“Drone technology has the potential to be faster,” Klassen said. “It is potentially less logistically complicated.”

But developing the drone technology necessary to safely transport an organ is no small feat. Scalea and his team designed and developed a box that would maintain the organ’s temperature and system for providing real-time updates to clinicians about the organ’s status and location though an app on their phone. He has since patented the technology.

He partnered with engineers from the University of Maryland, who designed and built a custom drone that could manage the 10-pound package. The engineers also helped navigate the logistical and technical challenges of the project.

“It’s a systems engineering problem because it’s not just one brand of engineering or one type of technology,” said Matt Scassero, director of the University of Maryland’s Unmanned Aircraft Systems Test Site and a member of the team. “You have to get them all to work together.”

The drone was designed with redundant systems to ensure that if one part of the machine failed, the organ was protected and could still be safely delivered, Scassero noted. This included a parachute in case of an emergency landing, dual battery systems, as well as back-up power train, power distribution, and communications systems. The team had 2 drone pilots ready to take over if the automated system failed—but that wasn’t necessary, Scalea said.

The team also worked with the Federal Aviation Administration (FAA) to get permission to fly over an urban space near an airport at night, Scassero said. They worked with the city of Baltimore and its first responders to close off a few busy streets while the drone was passing over them to minimize any risks to those below.

Before flying an actual organ intended for transplant, they tested the drone for seven and a half hours over 44 different trips, Scalea said. They also tested the effects of the trip on a donor kidney that wasn’t accepted for transplant. They found that the system kept the organ at a steady temperature, although some pressure changes occurred at changing altitudes. The organ experienced less vibration on the drone flight than on an airplane, and biopsies taken before and after the flight revealed no harm.

“It’s a triumph of teamwork and leadership and vision, and it’s very, very cool,” Scalea said.

To achieve the goal of transporting organs over longer distances, Scassero said the team will have to create a larger drone that can navigate long distances out of sight from the engineering team. This will require getting FAA approvals for a different class of drone. The next steps will be continued testing of the technology in both urban and rural areas.

Although he cautioned that this exciting development is just a first step, Klassen noted the technology may one day have the potential to help transport organs to more geographically distant patients and potentially cut transport costs.

“If you can get organs potentially within the same timeframe to a broader group of patients, that can potentially address issues of geographic equity,” he said. “There’s a lot of potential.”

When a donor kidney becomes available, a patient’s transplant team gets an offer and must quickly decide whether it’s a good option for the patient. If it’s not a good fit and they decline it, it will be offered to the next patient in line.

Each hour that goes by in this process reduces the quality of the donor kidney and decreases the likelihood of transplant success. Some organs that are less optimal to begin with—for example those from older donors that are expected to function for shorter time periods—may be declined multiple times, Klassen noted. By the time these less optimal kidneys reach a center willing to accept it, it may be too late.

In fact, about 19% of donor kidneys are discarded and never used, said Rob McTier, a business architect at UNOS. Some of these organs may not meet increasingly high standards for transplantation, he explained, but UNOS also hears from centers that say they would have used a less optimal kidney if it had gotten to them sooner.

“We’re trying to devise systems of facilitated allocation to really get the organs most quickly to the centers that are most likely to use them,” said David Klassen, chief medical officer at UNOS.

One UNOS project is allowing 7 organ procurement organizations (OPOs) to directly upload images of the donor organ into UNOS’s DonorNet system to provide centers with the information they need to evaluate an offer as quickly as possible. Currently, some OPOs use external services to share images of donor organs with prospective transplant teams, which may add time to the process, McTier said. Other OPOs may upload images as lower quality attachments or may not provide images at all. The pilot will allow any transplant center receiving an offer from one of the participating OPOs to directly access an interactive image.

Another pilot project will allow centers to filter out kidney offers they are unlikely to accept. It will allow transplant centers to set multiple limits on the offers they receive, McTier said. For example, they may say they don’t want offers of kidneys from deceased donors more than 100 miles away. The pilot launched in May 2019 with 29 participating transplant centers.

In the first phase of the pilot project, the centers will establish filters. They may use their existing criteria for donor organs or may use potential criteria suggested by a UNOS analysis of their past choices. UNOS will then analyze how applying those filters would have affected UNOS offers to the centers over the previous 2 to 5 years. In the second phase, the filters will be applied to real donor offers the centers receive. In a third phase, the centers may be able to establish specific filters for individual recipients.

“We’re really paying close attention to whether this will have an effect on the kidney discard rate and decrease that,” McTier said.

Ninety-six percent of donor organs across the country are currently tracked using a UPS-like bar code system. The program called TransNet started in 2012. It was designed by Department of Health and Human Services Entrepreneur-in-Residence David Cartier, who formerly worked at UPS and used his logistics expertise to create a standardized process that would help streamline organ procurement and reduce errors associated with hand-written labels.

The effort helped eliminate the need for repeated label checks by OPO coordinators, who have the challenging job of working with deceased donors families, said Chris McLaughlin, chief of the Organ Transplantation Branch at the Health Resources and Services Administration.

“It makes their job a little bit easier,” McLaughlin said. “It was a tremendous success from our perspective.”

Klassen noted UNOS is currently looking at ways to use machine learning and big data analytics techniques to make better use of the data the organization has. The goal of all these projects is “to help get the right organ to the right person as effectively as we can,” he said.