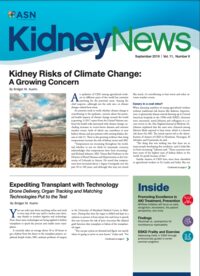 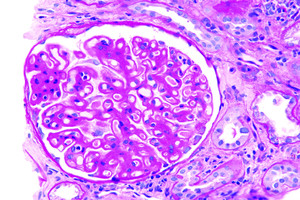 Rituximab versus Cyclosporine for Membranous Nephropathy

In patients with membranous nephropathy, rituximab is noninferior to cyclosporine in inducing remission, and superior in terms of maintaining proteinuria remission up to 2 years, reports a trial in The New England Journal of Medicine.

The randomized, open-label “Membranous Nephropathy Trial of Rituximab” (MENTOR) included 130 patients with membranous nephropathy enrolled at 22 North American centers. All had stable quantified creatinine clearance of 40 mL/min/1.73 m2 or higher and at least 3 months on angiotensin-system blockade. Patients were assigned to rituximab, two 1000 mg IV infusions given 14 days apart; or oral cyclosporine, starting dose 3.5 mg/kg/d for 12 months. In the rituximab group, treatment could be repeated at 6 months in case of partial response.

Among patients in remission who were positive for anti-phospholipase A2-receptor antibodies, the decline in antibodies was faster, larger, and lasted longer with rituximab. Adverse event rates were 17% with rituximab and 31% with cyclosporine.

For patients with membranous nephropathy requiring immunosuppressive therapy, the calcineurin inhibitor cyclosporine is effective, but has a high relapse rate after discontinuation. Since B-cell dysfunction plays a pathogenetic role in this condition, selective B-cell suppression with rituximab is a promising alternative.

This study finds no difference in the rate of complete or partial remission with rituximab compared to cyclosporine for patients with membranous nephropathy. Rituximab is superior in terms of long-term proteinuria remission up to 24 months in patients at high risk of progressive disease. The researchers note that intravenous rituximab may improve adherence compared to oral cyclosporine; its higher cost may be offset by its prolonged benefits [Fervenza FC, et al. Rituximab or cyclosporine in the treatment of membranous nephropathy. N Engl J Med 2019; 381:36–46].