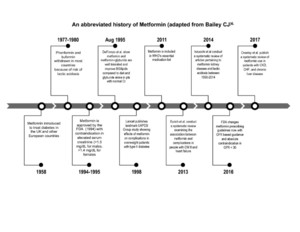 Effective, safe glycemic control is a global priority because uncontrolled diabetes contributes to a substantial burden of morbidity and mortality related to chronic kidney disease (CKD), ESKD, and cardiovascular disease (CVD) (1, 2). However, achieving this goal in patients with advanced kidney disease is complicated by evolving safety recommendations and contraindications to several existing antihyperglycemic medications when kidney function is substantially impaired (2). Amid robust evidence for inhibition of the renin-angiotensin system as the mainstay of managing diabetic kidney disease and growing attention to the significant cardiovascular, kidney, and survival benefits of sodium glucose cotransporter 2 inhibitors, the important role of metformin should not be forgotten (1, 3, 4).

The therapeutic efficacy of metformin, its 60-plus-years history of use, and its relatively strong safety profile, low cost, and weight neutrality render it a first-line antiglycemic agent by European and U.S. guidelines (Figure 1) (5, 6). Metformin is a biguanide recognized for its important role in improving glycemic control through mechanisms distinctly different from those of insulin, sulfonylureas, glucagon-like peptide-1 agonists, dipeptidyl peptidase-4 inhibitors, and sodium glucose co-transporter 2 inhibitors. Our understanding of the mechanisms of action of metformin remains incomplete, although its antiglycemic effects occur primarily through enhanced insulin sensitivity and decreased gluconeogenesis by mitochondrial inhibition and increased activation of AMP-kinase (7, 8).

Bolstered by evidence regarding the long-term cardiovascular, diabetes-related, and survival benefits of metformin therapy, the American Diabetes Association (ADA) 2019 guidelines recommend consideration of metformin for the prevention of type 2 diabetes in individuals with prediabetes, especially in those older than 60 years, those with body mass index >35, and women with a history of gestational diabetes (9). Moreover, metformin continues to be the ADA’s preferred initial agent for the treatment of type 2 diabetes as long as it is well tolerated and not contraindicated.

When metformin is used as a single agent, the average hemoglobin A1c reduction associated with it ranges from 1% to 1.5%. In addition, important longer-term benefits of metformin in reducing cardiovascular risk date back to compelling data from the UK Prospective Diabetes Study (UKPDS) (8). Metformin significantly reduced the risk for any diabetes-related endpoint, diabetes-related mortality, and all-cause mortality in obese individuals with newly diagnosed type 2 diabetes when it was compared with conventional therapy (with dietary control) alone (8). Although additional studies are needed to 1) understand the effects of metformin in combination with sulfonylureas and 2) better understand the impact of metformin in non-U.S. and European populations, the long-term effects of metformin are robust. For example, the 10-year follow-up of the metformin group in UKPDS showed that significant reductions persisted for diabetes-related endpoints, death of any cause, and myocardial infarction (10). Finally, metformin continues to be studied for its potential pleiotropic benefits, including antineoplastic effects mediated by AMP-kinase–dependent and independent inhibition of mTOR, treatment of polycystic ovary syndrome, attenuated atherosclerosis and vascular senescence as demonstrated in mouse models, and lipid-lowering and anti-inflammatory effects (2, 11).

Before 2016: the legacy of phenformin

Despite abundant evidence regarding its benefits, the U.S. Food and Drug Administration (FDA) regulations before 2016 restricted the use of metformin in several groups because of concerns regarding a relatively uncommon but dreaded complication: metformin-associated lactic acidosis (MALA) (1).

Concerns regarding metformin date back to the use of phenformin, the predecessor of metformin, which was withdrawn in 1977 because of concerns about lactic acidosis (12). Phenformin alters hepatic oxidative phosphorylation and thus leads to increased lactate production. It is distinguished from metformin because of its more lipophilic nature and its slower renal excretion: half-life 7 to 15 hours versus an estimated 6.5 hours for metformin (3, 12). Metformin, unlike phenformin, has been shown to be maintained closer to therapeutic and safe ranges, even in mild to moderate CKD (eGFR >30). In sum, there is no consistent association between metformin and lactic acidosis, and the overall number of cases is small (1 per 23,000 to 30,000 person-years among metformin users compared with approximately 1 per 18,000 to 21,000 person-years among patients with type 2 diabetes using other agents) (12).

A landmark publication in 2014 by Inzucchi et al. (12) suggested expanding the use of metformin to previously ineligible populations (e.g., individuals with mild to moderate CKD). Furthermore, the study suggested that avoiding MALA and its sequelae requires understanding the unique risk factors for MALA, including less common situations in which systemic hypoperfusion and hypoxia result in excess lactic acidosis production (3, 12).

These findings are reflected in the revised 2016 FDA guidance, which states that metformin is contraindicated in patients with an eGFR <30, which is in line with the report by Hung et al. (4) suggesting that metformin may be an independent risk factor for death in comparison with propensity-matched non–metformin users among individuals with stage 5 CKD. The FDA guidelines further suggest careful eGFR monitoring in a patient using metformin, reassessment of the risks and benefits when eGFR is <45, avoiding initiation of metformin when eGFR is <45, and temporary discontinuation before and during iodinated contrast imaging procedures in patients with eGFR 30 to 60.

Beyond 2016: metformin use in contraindicated conditions

An important 2017 systematic review and meta-analysis by Crowley et al (1), released after the 2016 FDA labeling changes, evaluated metformin use in individuals with type 2 diabetes and moderate to severe CKD, congestive heart failure (CHF), or chronic liver disease with impaired hepatic function. Four retrospective cohort studies, one prospective cohort study, and one nested case-control study were evaluated, and follow-up in these studies ranged from 1 to 3.9 years. Among these studies, which included 33,442 individuals and examined all-cause mortality, the relative chance of death was 22% lower for individuals using versus not using metformin (p < 0.001, I2 = 89.8%).

The authors found associations of metformin use with reduced all-cause mortality in all three groups for which metformin had been previously contraindicated. Metformin use was also noted in two separate studies to be 1) significantly associated with lower risk of CHF readmissions and 2) not significantly associated with a difference in major adverse cardiovascular events among individuals with GFR 40 to <60 compared with those with GFR 30 to <45. Supporting its overall safety profile, metformin was associated with less hypoglycemia than were glyburide and insulin among individuals with GFR <30 and <45. In spite of limitations in this meta-analysis, including the use of observational studies with moderate risk of bias and low strength of evidence overall, the authors suggest that metformin may be associated with important mortality benefits and other benefits in individuals with moderate CKD. They also corroborate the evidence from a similar systematic review suggesting that metformin is associated with reduced mortality in CHF, a condition often comorbid in patients with CKD (13).

Given these findings, additional studies focused on the safety and benefits of metformin use in individuals with eGFR 30 to 45 and <30 are warranted to guide nuanced clinical decision-making. In the meantime, nephrologists and other clinicians who care for individuals with mild to moderate CKD should remember metformin as a critical part of the antiglycemic pharmacologic repertoire, using clinical equipoise and FDA guidelines to guide an individualized approach to prescribing and to patient education.