Reducing the human and financial burden of progressive diabetic kidney disease (DKD) and ESKD stalled after the landmark trials of renin-angiotensin system inhibitors (RASi) in the early 2000s. The recent introduction of sodium glucose co-transporter 2 inhibitors (SGLT-2i) appears to reverse 20 years of stagnation in this area. This short review summarizes the key findings in this emerging success story of nephrology therapeutics.

According to the Brenner hypothesis (1), hyperfiltration drives nephrons to glomerulosclerosis and eventually leads to chronic kidney disease (CKD) and ESKD. Reducing hyperfiltration has been the major paradigm for slowing the progression of CKD through RASi. However, the actual mechanisms of hyperfiltration in DKD remained poorly defined until the seminal report that a phlorizin, a naturally occurring SGLT-2i found in the unripe apple, inhibited glomerular hyperfiltration in the diabetic rat (2). The hypothesis was put forward that stimulation of tubular glucose/sodium transport through the SGLT-2 system reduced tubuloglomerular feedback, decreasing hyperfiltration in DKD. Subsequent micropuncture studies provided evidence in support of this hypothesis under long-term SGLT-2i administration and in diabetic mice lacking the SGLT-2 transporter (3, 4). In similar studies, SGLT-2i prevented changes in BP, glomerular size, and markers of inflammation (5).

The U.S. Food and Drug Administration (FDA) approved the first SGLT-2i in early 2013, followed by the report of the mandatory cardiovascular outcomes safety trials (Table 1) (6–9). Overall, the trials reported to date show that SGLT-2i do not raise cardiovascular risk. Two of the SGLT-2i (canagliflozin and empagliflozin) are associated with clinically meaningful reductions in major cardiovascular events and cardiovascular death. All-cause mortality was reduced by empagliflozin, and all three SGLT-2i safety trials reported reductions in congestive heart failure (CHF). In these trials, there was an impressive reduction in the risk for hard renal endpoints (ESKD, need for dialysis or doubling of serum creatinine [DSC], or death), with relative risk reductions between 40% and 24%. These reductions, along with the effects of SGLT-2i on cardiac outcomes, are much larger than those obtained with RASi (Table 1). However, renal endpoints were either secondary or exploratory in these cardiovascular safety trials, requiring further confirmation. 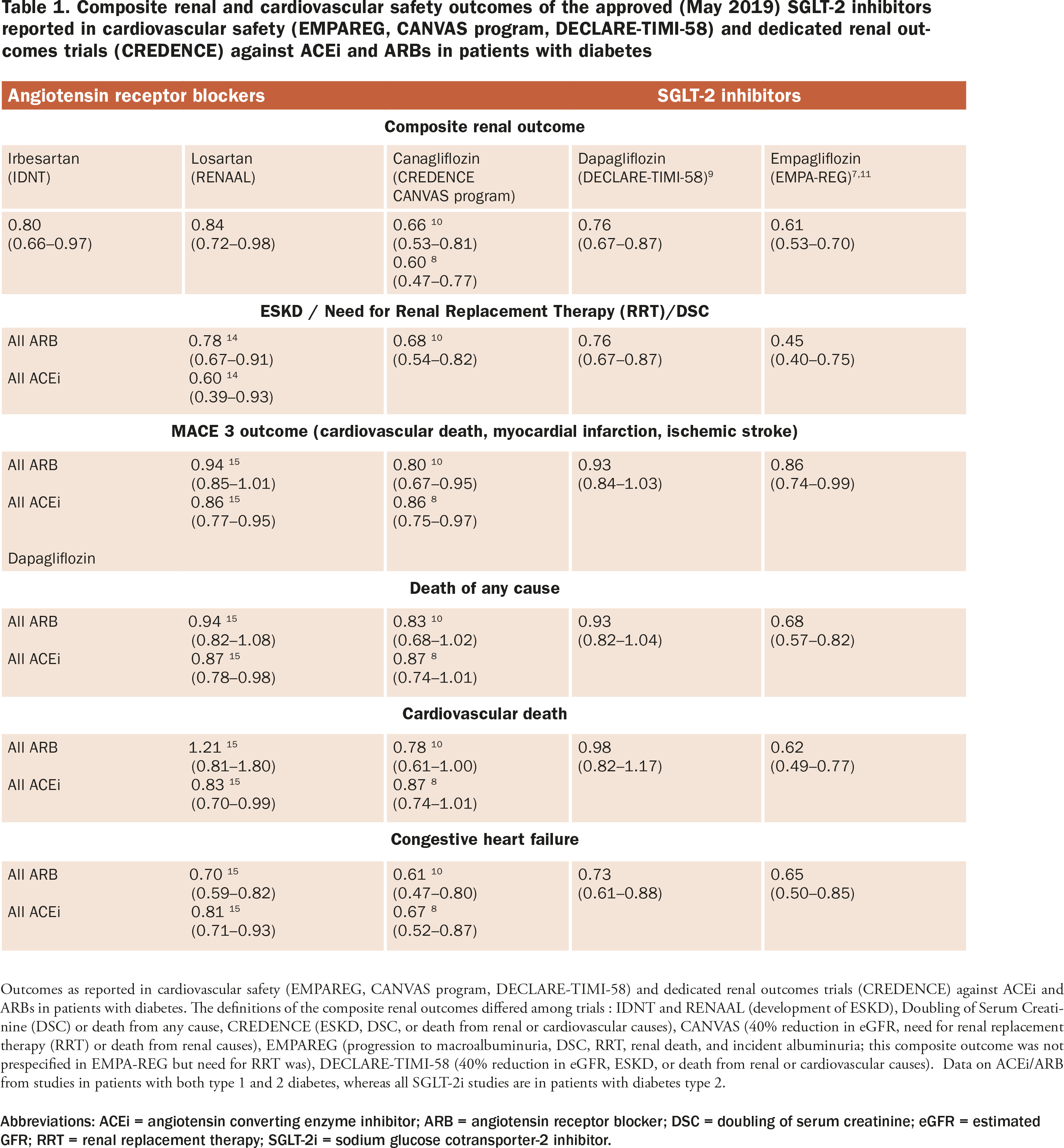 The first dedicated renal endpoint, double-blind, randomized trial was recently reported for canagliflozin (CREDENCE) (10). This trial enrolled patients with estimated GFR (eGFR) between 30 and 90 mL/min per 1.73 m2, on a background of RASi therapy. The composite endpoint of ESKD/DSC or renal death was lowered by 34%, and the relative risk of ESKD was lower by 32%. The canagliflozin group also had a lower risk of cardiovascular death, myocardial infarction, or stroke and CHF (Table 1). Importantly, there were no differences in rates of amputation or fracture, safety signals that had been reported in previous studies.

Examination of the slope of the eGFR over time shows that the SGLT-2i conform to the pattern anticipated from the Brenner hypothesis and verified in the RASi era: An initial decline over the first couple of months of therapy is followed by dramatically reduced loss of eGFR over time (10, 11). Viewed as a class, SGLT-2i also reduce BP by 2.46 mm Hg (systolic) and 1.46 mm Hg (diastolic) while also reducing body weight by 1.88 kg and waist circumference by 2.89 cm (12).

The American Diabetes Association (ADA) guidelines (13) recommend that SGLT-2i with documented cardiovascular benefit (to date, empagliflozin and canagliflozin) should be the second agent added after metformin in patients with type 2 diabetes (T2D) and CKD or CHF. This recommendation is in alignment with the FDA-approved indications for these two agents (Table 2). Currently four SGLT-2i have been approved in the United States (Tables 2 and 3); they are similar in many regards but also different in others (e.g., status of completed trials, heterogeneity in renal and cardiovascular outcomes, dosing recommendations, intrarenal handling, and an emerging, highly technical literature about off-target effects). 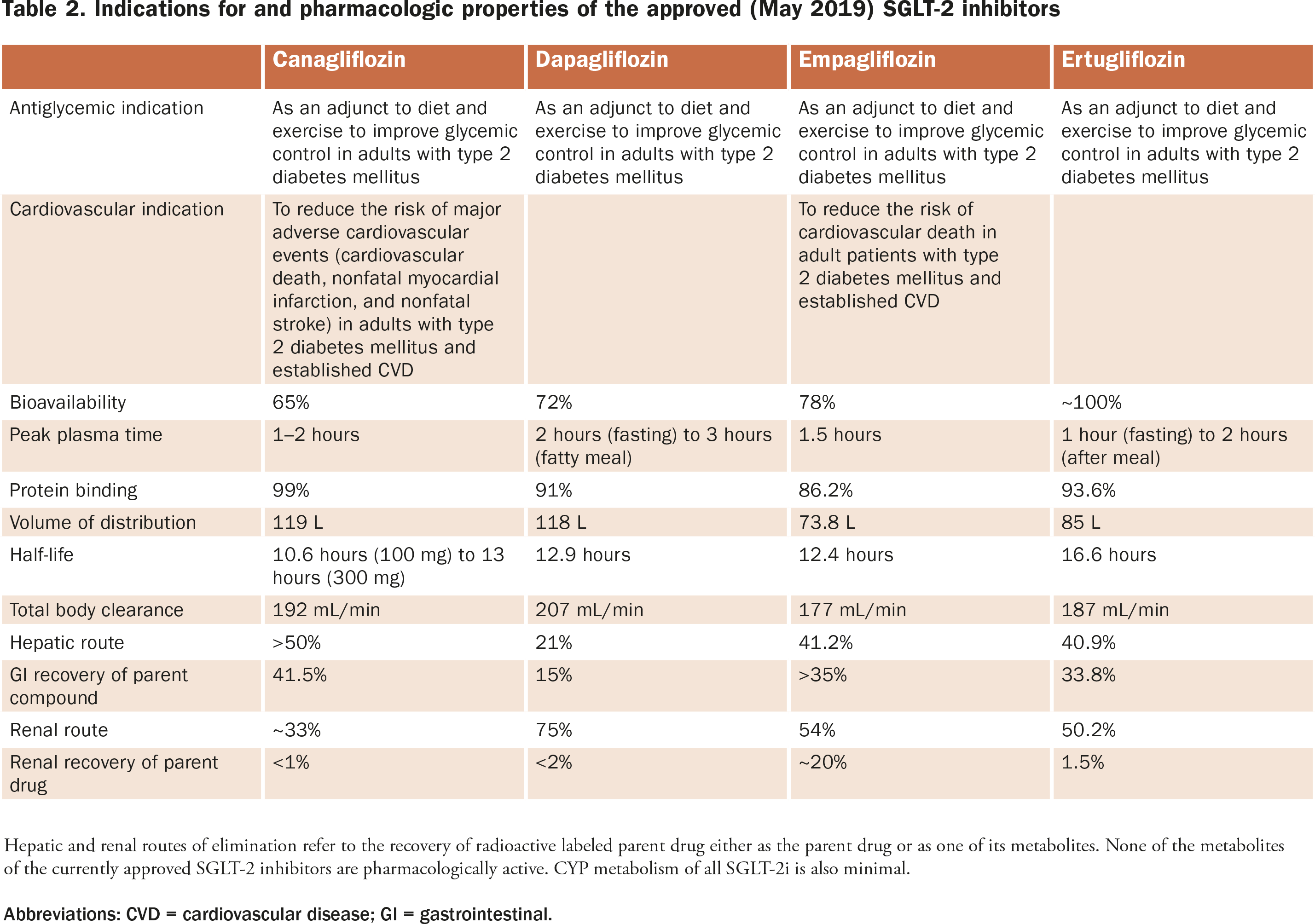 A suggested pragmatic approach to how these agents may be introduced into nephrology practice follows: The ADA guidelines (a live document updated throughout the year) should be consulted for the currently approved indications for SGLT-2i. As nephrologists, we want to reduce cardiorenal risk in our patients, not just lower the hemoglobin A1c, so SGLT-2i with proven benefit should be prescribed, not merely recommended, by our specialty first (Table 2). Nevertheless, the inclusion of drugs in formularies does not always follow the clinical evidence, and the clinician will often have to choose between any SGLT-2i or no SGLT-2i at all. In these situations, one should opt for the SGLT-2i whose more robust evidence the insurance will cover and the patient can afford the copay for. For optimal effect, these agents should be added on the background of RASi therapy (CREDENCE), yet, even RASi-intolerant patients can benefit, as shown in the large subgroup (20%) of the cardiovascular safety trials who were not receiving RASi.

In contrast to the antiglycemic effect, the cardiorenal benefit appears to be dose independent, so the lowest dose of all drugs should be used. Dosing in relation to eGFR is likely to evolve over time, so the prescribing information should be consulted. The guidelines in Table 3 are likely to be modified to allow continuation of drugs even when the eGFR declines after CREDENCE. As with RASi, kidney function should be monitored periodically because these drugs have been associated with acute kidney injury (AKI). However, AKI should be clearly distinguished from the expected initial drop in kidney function, which, as with RASi, may signal a long-term benefit.

Patients should be warned about potential side effects, especially euglycemic ketoacidosis in patients already receiving insulin, and fungal genital infections. Common-sense clinical measures that may reduce the frequency (such as drying the genital area), prevent or reduce severity (instituting “sick-day” rules), or allow the early detection of these complications (e.g., providing urinary ketone strips) should be discussed with our patients. Despite the reassuring follow-up data about amputations, a thorough discussion of the risk-versus-benefit ratio should be undertaken in patients with pre-existing peripheral vascular disease.

Going forward, additional studies will report kidney and cardiac efficacy, dosing, and safety data about rare, yet sensational, side effects (e.g., amputations or Fournier gangrene) about all SGLT-2i. Given the magnitude of benefit seen in the existing trials, waiting for these future studies to conclude before we use these agents in patients with type 2 diabetes and CKD implies that we forego the opportunity to improve the care of our patients today.