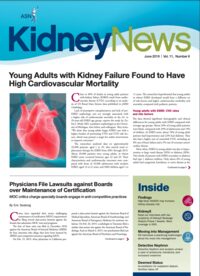 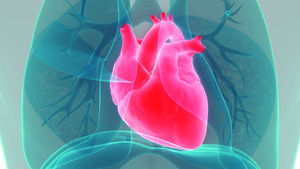 Close to 40% of deaths in young adult patients with kidney failure (ESRD) result from cardiovascular disease (CVD), according to an analysis of US Renal Data System data published in JAMA Cardiology.

Lack of preemptive transplantation and lack of pre-ESRD nephrology care are strongly associated with a higher risk of cardiovascular mortality in the 22- to 29-year-old ESRD age group, reports the study by Zubin J. Modi, MD, a pediatric nephrologist at the University of Michigan, Ann Arbor, and colleagues. They write, “We show that young adults began ESRD care with a higher burden of preexisting CVD and CVD risk factors, which may present a target for earlier intervention to improve outcomes.”

The researchers analyzed data on approximately 33,000 patients, aged 1 to 29, who started renal replacement therapy for ESRD from 2001 through 2013. About 20,000 patients were young adults, in whom ESRD onset occurred between ages 22 and 29. Their characteristics and cardiovascular outcomes were compared with those of 10,000 adolescents with incident ESRD, aged 12 to 21 years, and 3000 children aged 1 to 11 years. The researchers hypothesized that young adults in whom ESRD developed would have a different set of risk factors and higher cardiovascular morbidity and mortality compared with pediatric patients.

The data showed significant demographic and clinical differences for young adults with ESRD compared with younger age groups. About 39% of young adult patients were black, compared with 29% of adolescents and 19% of children. At ESRD onset, about 78% of young adult patients had hypertension and 22% had diabetes. They also had a higher rate of comorbid CVD, including an 8% rate of heart failure and a 5% rate of coronary artery/cardiac disease.

Most often, ESRD in young adults was due to hypertension or large vessel disease (30%) or diabetes (30%). Two-thirds of patients with ESRD secondary to diabetes had type 1 diabetes mellitus. Only about 6% of young adults had congenital, hereditary, or cystic disease as the primary cause of ESRD, compared with 16% of adolescents and 34% of children.

Differences in management were also related to CVD outcomes. About 5.5% of young adult patients received preemptive transplantation, compared with 13.5% of adolescents and 27% of children. Hemodialysis and peritoneal dialysis were strongly associated with increased rates of CVD hospitalization: by 14-fold and eightfold, respectively. The CVD hospitalization rates were also higher for black patients, women, patients who were receiving public insurance or were uninsured, and patients with ESRD from causes other than congenital, hereditary, or cystic causes. Patients with comorbid CVD, hypertension, or diabetes at the time of ESRD onset were also at higher risk.

CVD accounted for 39% of deaths in young adults with ESRD. In this age group, cardiovascular mortality increased over time—from 11 per 1000 patient-years at 1 year, to 37 per 1000 at 3 years, to 70 per 1000 at 5 years—and was higher than in adolescents or children. Citing national vital statistics for 2014, Modi and coauthors write, “[Y]oung adults with incident ESRD had a 143 to 500 times higher risk for CVD mortality than the age-matched general population.”

Fewer than half (47%) of young adult patients received nephrology care before ESRD diagnosis, compared with 57% of adolescents and 74% of children. Young adults who did receive pre-ESRD care were at lower risk of cardiovascular death (HR 0.77). Modi and coauthors write, “Lack of adequate insurance prior to ESRD onset implies limited access to pre-ESRD care, with concomitant risks of delayed diagnosis and insufficient opportunity to provide optimal management during times of less severe kidney disease.”

Consistent with previous studies, cardiovascular morbidity and mortality were higher in patients with preexisting coronary and cardiac disease, diabetes, and heart failure. The causes of ESRD also showed a possible association with the risk of CVD hospitalization and death: “[G]lomerular diseases were associated with adolescent or young adult ESRD onset and a higher risk of CVD mortality,” according to the authors. “It is possible that glomerular diseases increase systemic inflammation and thereby contribute to a higher CVD burden.”

For both children and adults, CVD is a leading cause of morbidity and mortality associated with ESRD. However, relatively little is known about the burden of CVD in young adults with ESRD. Recognizing the “unique challenges” in this group of patients, the US Renal Data System has recently started reporting surveillance data specific to the young adult ESRD population.

The new analysis suggests that patients with incident ESRD developing between ages 21 and 30 have different CVD risks and burdens in comparison with younger age groups. Young adults with ESRD have consistently higher rates of hospitalization and death as a result of CVD than do pediatric ESRD patients. “Their risk of hospitalization and mortality owing to cardiovascular disease is more comparable with older adults than children,” Modi and colleagues write.

The study identifies a wide range of risk factors that may aid in developing age-appropriate strategies to improve cardiovascular outcomes in young adults with incident ESRD. “Potentially modifiable risk factors for this young adult population may include optimizing health care for the underlying kidney disease and other coexisting conditions before the onset of ESRD and increasing access to preemptive transplant,” the researchers write.

Information on the impact of race, sex, and other nonmodifiable risk factors may lend insights into the genetic, social, and other factors affecting the age-related differences in cardiovascular mortality among young patients with ESRD. “Together, these steps may lead to improved implementation of age-appropriate treatment and patient management strategies and overall cardiovascular health of this unique population,” Modi said.