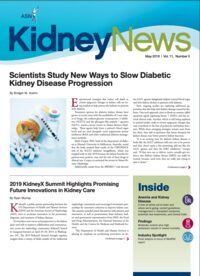 Hemoglobin trends among dialysis patients in the United States from 2010 to 2017, New York 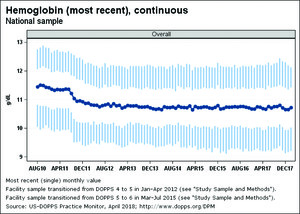 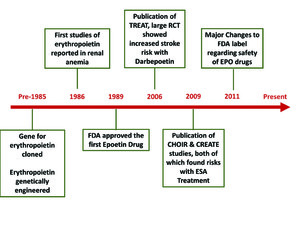 Anemia and Chronic Kidney Disease: WHERE WE’VE BEEN, WHERE WE’RE GOING

I recently gave a lecture in Chicago on anemia in chronic kidney disease. Afterward, an audience member told me he usually does not go to lectures on anemia any more, presumably because the subject can sometimes seem a bit “played out.” In a sense I understand the sentiment, but I realized that this article might be an opportunity to rekindle interest in a subject that remains vitally important.

I believe that some gloss has been lost for several reasons: 1) Multiple dishearteningly negative studies have demonstrated the dangers of overtreating with erythropoietin analogues (EPO) (1). 2) Nurse-operated EPO and iron protocols have removed nephrologists from much active involvement with anemia management. 3) Most nephrologists practicing today are too young to have experienced the pre-EPO era, when severe anemia caused debilitating symptoms. 4) Awareness is lacking of exciting newer drugs being developed in an effort to improve anemia treatment.

This article title includes the words “where we’ve been” with anemia. It is still remarkable to me that as a medical student I cared for dialysis patients whose hemoglobin levels were often lower than 7 g/dL. Blood transfusions were common, and patients’ quality of life was greatly diminished. How remarkable that in 1985 the seminal articles were published on the cloning of the erythropoietin gene (2) and by that December, Joseph Eschbach, MD, successfully treated the first patients with the recombinant substance (J. Eschbach, personal communication). Subsequent widespread treatment of anemia in dialysis patients was an advance that greatly improved patients’ lives.

Early on, it became clear that EPO treatment was highly effective in raising hemoglobin concentrations and greatly reducing transfusion dependence. In the 1990s and 2000s, interest shifted to exploring the potential benefits of full hemoglobin correction to the normal range. Several randomized controlled trials were conducted, leading to a clear conclusion that targeting hemoglobin levels above 13 g/dL with EPO does not improve clinical outcomes and, in fact, results in an increase in cardiovascular and thromboembolic events (1). As a result, EPO treatment is far more conservative now than it had been until 2008 to 2012 (Figures 1 and 2).

It has remained unclear why raising hemoglobin to normal levels with EPO is harmful to patients. Several possible explanations exist. Most clear would be that increased hemoglobin with attendant increases in whole blood viscosity might be injurious in patients with atherosclerotic disease. However, a tantalizing fact is that observational studies and post hoc analyses of randomized controlled trials consistently find that the achievement (as opposed to targeting) of higher hemoglobin concentrations actually associates not with worse, but with better, outcomes. Rather, it is higher doses of EPO that strongly correlate in these analyses with adverse outcomes (3). This might suggest that the administration of nonphysiologic high doses of EPO could be harmful. Although these results are associations and do not prove causality, they do suggest that other methods of treating anemia that do not involve high-dose EPO injection could be of interest.

This has led to consideration of a new class of agents, alternatively called hypoxia-inducible factor stabilizers or prolyl-hydroxylase inhibitors. These drugs stimulate erythropoietin production and improve iron kinetics, leading to improvement in anemia. Importantly, they stimulate an increase in hemoglobin without a large rise in serum erythropoietin concentrations (4). A further article in this section will discuss this subject in more depth.

An important aspect of anemia management is iron supplementation. In 1995, it became clear that intravenous (IV) iron was an essential component of care for patients receiving dialysis and resulted in reduced EPO dose requirements (5). The important news in 2018 was the publication of the PIVOTAL trial by Macdougall et al (6). This landmark article compared a conservative approach to IV iron administration in hemodialysis patients with a more aggressive protocol (treatment with 400 mg monthly, unless serum ferritin was >700 µg/L or transferrin saturation was ≥40%. Not unexpectedly, the study found that EPO dose requirements were reduced with the more intensive iron protocol. What made the study notable was the surprise finding that intensive IV iron administration resulted in a reduction in the primary outcome: a composite of death, nonfatal myocardial infarction, stroke, and hospitalization for heart failure (6). This result, along with emerging data from studies of IV iron in heart failure (7), indicates a possible cardiovascular benefit to IV iron treatment.

In conclusion, it is important that we remember the importance of anemia treatment and the distressing anemic symptoms of patients without proper treatment. Over the next few years we will learn about new drugs to treat anemia, with hope for avoiding cardiovascular and thromboembolic risk.

I will end by making a plea to my colleagues in nephrology. In dialysis centers in the United States, much anemia treatment occurs without substantial input from physicians. Nurse-managed protocols drive EPO dose adjustments and IV iron courses. This generally works well, but if nephrologists don’t carefully monitor the treatment, then a risk is created for missing chronic bleeding and other hematologic conditions that protocols simply cannot detect. Please stay involved in anemia management.

In this month’s edition of ASN Kidney News, we reintroduce the topic of the management of anemia in CKD and ESKD. Depending on your vintage as nephrologists, these articles may serve as either a review or an introduction to what we have learned and experienced in this field. From the early heady days following the introduction of rEPO offering a “solution” to the nightmare of managing anemia with blood transfusions or anabolic steroids to the reality that “too much of a good thing” has consequences, we follow the journey of the clinical trials and science that now take us into a new era.

Phase 2 clinical trials with HIFs have suggested that they may present a more physiologic approach to anemia management, offering an effective oral agent that mobilizes iron and, at least to this point, has no serious short-term safety signals.

Drs. Coyne’s and Szczech’s review of the PIVOTAL trial helps clarify many outstanding questions about the safety and efficacy of iron in anemia management.

We have learned much, but there is more to learn; new questions, ideas, and opportunities will arise. We hope this series of articles engages and educates you on this topic and that you will help shape the future of anemia management.