Rates of death by any cause and a composite of myocardial infarction, stroke, and hospitalization for heart failure as recurrent events 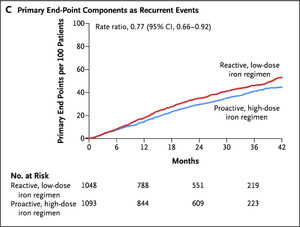 Clinical Place of Iron in the 21st Century

In 2018, expert opinion that our present strategies for the use of intravenous (IV) iron were harming chronic kidney disease (CKD) patients took a severe thrashing. Despite clear evidence that iron is essential for treating the anemia of CKD, generous IV iron use has been discouraged by guidelines and by many experts. Despite this advice, physicians in the United States have given more IV iron to dialysis patients than those in other regions of the world. The results from the Proactive IV Iron Therapy in Haemodialysis Patients (PIVOTAL) trial, paired with the results from IV iron trials that include nondialysis CKD (CKD-ND) patients, demonstrate IV iron is not only safe but superior to conservative iron strategies (1).

Since at least 2006, guidelines have recommended very conservative IV iron use because of safety concerns. Experts pointed to a lack of long-term safety studies of IV iron and to some observational, in vitro, and preclinical studies suggesting that IV iron could increase cardiovascular injury and infections.

The 2006 KDOQI guidelines recommended that IV iron was clearly needed only when ferritin was below 200 ng/mL and should not be routinely used in patients with ferritin >500 ng/mL (3). Despite this, average ferritin levels in the dialysis population in the United States slowly increased from ∼600 ng/mL in 2006 to ∼850 ng/mL by 2011, and remain fairly stable (4).

The superiority of proactive IV iron use

The PIVOTAL trial randomized 2141 newer dialysis patients to a proactive IV iron strategy or a reactive iron strategy and followed them for as long as 42 months. The proactive group received an average of 3.8 g IV iron in the first year, then ∼200 mg/month thereafter. The reactive group received the cautious experts’ guideline advice: IV iron only when ferritin was less than 200 ng/mL or transferrin saturation (TSAT) less than 20% (1).

Proactive use of IV iron significantly reduced cardiovascular events and deaths (Figure 1), transfusions, and doses of erythropoiesis-stimulating agents (ESA), and it did not increase infections in patients using hemodialysis (1). Given that IV iron is relatively inexpensive, proactive iron use pays for itself by reducing or eliminating costly ESA therapy.

Trials of IV iron versus placebo in patients with heart failure have also demonstrated significant benefits (5, 6). About 40% of patients in the heart failure trials have CKD. Regardless of CKD status, IV iron improves heart failure functional status, appears to decrease heart failure–related hospitalizations and possibly mortality, and does not increase infections (6).

Claims that dialysis patients in the United States have severe iron overload based on high LIC have also been proved wrong. Whereas IV iron is stored in the liver, total body iron is far lower than in hemochromatosis (7). Additionally, the proactive iron arm in the PIVOTAL trial would be considered severely iron overloaded; yet, the outcomes were superior.

Iron strategies for the 21st century

Iron deficiency affects millions of CKD and dialysis patients, and treatment improves health and saves lives. Hemochromatosis is also serious and should be avoided by stopping iron when TSAT is above 50%. A broad safe therapeutic window exists between those two disorders, and achieving it improves clinical outcomes, possibly by reducing ESA use, which increases the risks for death, serious adverse cardiovascular reactions, and stroke.

Functional or absolute iron deficiency may be present despite ferritin values of 1200 ng/mL and TSAT of 30%, and occasionally higher (8, 9). A trial of IV iron is superior to ferritin and TSAT testing for determination of iron deficiency.

Oral iron and IV iron are effective in nondialysis CKD patients, despite seemingly normal ferritin (in the range of 50 to 300 ng/mL) and TSAT (>15% up to 30%) values. A trial of oral iron in CKD-related anemia is appropriate, and IV iron is the next best treatment. Both can raise the hemoglobin sufficiently to preclude the use of ESAs. IV iron is the first choice if anemia is severe or a more rapid rise in hemoglobin is desired.

In the dialysis population, ferritin has limited value; a high ferritin level resulting from inflammation may preclude the proper use of IV iron. TSAT is also a poor marker in this population, but a value above 50% in a patient who has not received IV iron in the previous 2 weeks is strongly suggestive of replete or high iron stores, and iron therapy should be stopped. The PIVOTAL trial shows that most incident patients should receive ∼1000 mg over the first 2 months to replete iron stores, then ∼200 mg/month to maintain stores. Adequate iron repletion should result in TSAT above 25% (ideally >30%), and monthly maintenance IV iron should lead to stable ferritin values in the range of 500 to 1200 ng/mL. The payoff for this is fewer transfusions, lower ESA doses (including no ESA), and better clinical outcomes.

In all CKD populations, ferric citrate (Auryxia), given with meals, has been shown to increase iron stores, raise hemoglobin levels, and/or reduce ESA doses. This agent has the potential advantage of binding dietary phosphorus. It is an attractive alternative to standard oral iron and IV iron in all populations. It should be stopped when TSAT exceeds 50%.

Ferric pyrophosphate citrate (FPC, Triferic) is added to the bicarbonate concentrate prepared each day for hemodialysis. The FPC provides a steady infusion of the iron complex throughout the hemodialysis treatment. The very high affinity of pyrophosphate is surpassed only by the affinity of transferrin for iron, so FPC transfers iron directly to transferrin. Most hemodialysis patients might need some IV iron, but their requirements may be cut in half.

Last, hypoxia-inducible factor-β prolyl hydroxylase inhibitors (HIF-PHI) may improve oral iron absorption sufficiently that oral iron supplements could preclude the need for IV iron. Roxadustat is the first of this class of products to complete phase 3 studies, and we should be hearing some results at the World Congress of Nephrology in spring 2019. Of course, proactive IV iron use might reduce the dose or preclude the need for an HIF-PHI.